This was a column I wrote for EInsiders.com in June of 2006. 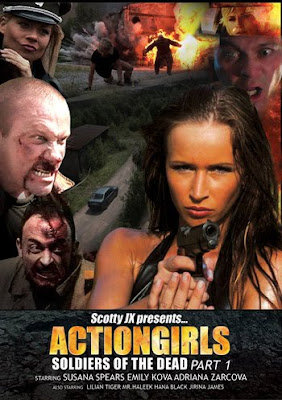 Director Scotty JX has a plan. He hopes to turn his soft-core porn site Actiongirls.com into a mainstream movie career. What I think he really wants to do is expand what the public considers mainstream. His Actiongirls.com website features some of the most beautiful naked women in the world firing machineguns, flame-throwers and bazookas. Think Sylvia Saint with an AK and you kind of have the idea. Of course, these beauties are either covered in a fine layer of oil or sweat as the jiggle to the automatic recoil. There is something very cool about the site. The fact that I had seen a few of the clips helped in my decision to say yes to Scotty when he offered to send me a screener of his new feature length film "Actiongirls: Soldiers of the Dead: Part 1." Of course the problem becomes 'When can I watch the flick without the wife or kids interrupting?' It's tough being an Internet critic at times! 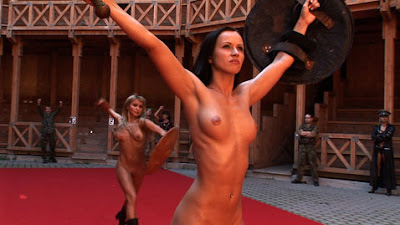 Sometime after Bush, the Democrats and those crazy jihadists have destroyed the world; all that remains is a brutal gang of Eurotrash misogynists and the hottest uberbabes imaginable. Some guy named Helman Himmler runs the show. He and his minions comb the countryside capturing every beautiful woman they can get their hands on. The foxes are trained to be gladiators for the amusement of Himmler and his thugs. Think hot-oil naked sword fights. Himmler's main squeeze is a leather-clad hottie called the Black Queen (Adriana Zarcova). Think "Ilsa: Shewolf of the SS" only much better looking. 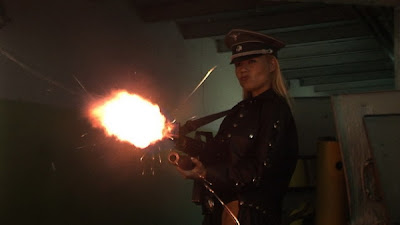 Susana (Susana Spears) is Himmler's top gladiator. She plays up to the boss in hopes of escaping. And that is exactly what she does. She later hooks up with Emile (Emile Kova). The foxy pair hopes to bring down Himmler's hoard. One major problems stands in their way. The Black Queen discovers a formula which allows her to reanimate dead people and turn them into flesh eating warriors. (Herbert West lives!) The Black Queen sends her army of zombies on their trail. What follows in naked mayhem with the two heroines kicking some major zombie ass. 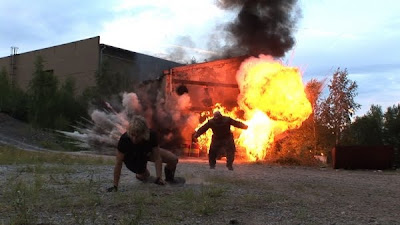 The production values are quite good. Scotty JX shot the movie on a $5 million dollar budget. The post-apocalyptic look is excellent. I think this was shot in the same neighborhood as the murder factory in "Hostel." There are plenty of in-jokes for movie geeks. The movie contains elements of such films as "Mad Max," "Re-Animator" and any one of a dozen action hero films. The big difference is that the heroes are sexy babes instead of muscle bound oafs. 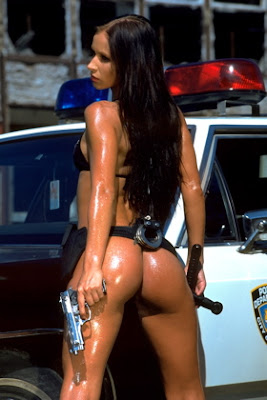 The title more than implies that this is the beginning of a series of films. The director hopes to get a theatrical release. Are the Cineplex’s in the US ready for invasion of the "Actiongirls"? Hard to say. The movie is not as explicit as the original "Emmanuelle." That movie was rated X and was released by a major Hollywood studio. Of course, that was during the liberal 1970s and not in our conservative Janet Jackson Nipplegate era.

Scotty JX has actually tried (and in many ways succeeded) to make an action movie of quality, with an imaginative story which also includes healthy doses of nudity. The sexual content is minimal. There is a bondage/lesbian scene at the beginning of the film and little or no actual sex after that. Like the images and clips on the website, the movie is more a celebration of the naked female form, whether they be showering off after a hard day in the gladiator ring, or fighting zombies. What Scotty JX has achieved is a reinvention of the Grindhouse films of the 70s fused with the exploitation films of the 60s. Fans of those two genres should eat this alive.