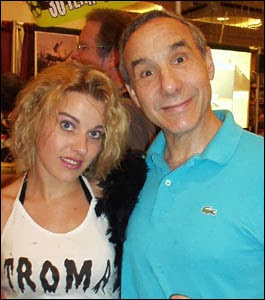 Troma Films has spent the last 30 years entertaining the world with some of the best of the ‘worst’ in schlock movies. Troma president Lloyd Kaufman has been responsible for such classics as “The Toxic Avenger,” “The Class of Nuke Em High” and “Def by Temptation.” Relying on low-budget production values, naked women, campy dialogue and outrageous scripts, Mr. Kaufman has become an Icon to millions of fans of ‘bad cinema.” Who’s to say what’s bad and what’s good? I didn’t meet and interview Lloyd Kaufman; I experienced him. I had a hard time keeping a straight face as Mr. Kaufman talked with me and worked the crowd around the Troma booth on Day Three of DragonCon. Mr. Kaufman was signing autographs on bananas, cracker packets and anything else his awed fans thrust in front of him. The man is an artist. And entrepreneur in the style of William Castle.

The Troma team with Mr. Kaufman included two pretty Tromettes. There was a blond named Nicky who will forever be stuck in my fantasy closet. Toxie was there as well as Nazi Guy and a few others. While Mr. Kaufman takes his movies very seriously, his tongue is otherwise firmly planted in his cheek. Kaufman’s rants are extremely politically incorrect. More power to him for that! If Bill Mahar wants to know what political incorrectness really is, he should spend a short time with the dynamo behind Troma Entertainment. When my time with Mr. Kaufman was over I told him he had balls. Mr. Kaufman responded, “Yeah, but they are real small.” “They may be small, but they clang loudly,” I said. “I like that. I’m going to use that. They’re small but they clang loudly.”

RW: It's an honor to meet and talk with you.

Lloyd Kaufman: Well Rusty, I can tell you that when I, Lloyd Kaufman, president of Troma and creator of the Toxic Avenger, when I'm not making those great movies like "Terror Firma" and "Tromeo and Juliet" and "Citizen Toxie," I like to kick back and learn from Entertainment Insiders because that's where you get the real truth about art and entertainment.

RW: I interviewed a young filmmaker who was on a panel with you in Cannes. Steve Balderson.

LK: And Roger Corman. We helped Balderson. We admired his film and we got him on that panel. I got him on TV.

RW: He spoke very highly of you. He was awed that you had him up there. He's filming his second film this fall with Dennis Hopper.

LK: Steve. I hope you give me a part in your new movie! Cause it's about a theme I'm rather interested in. "Terror Firma" has hermaphrodites and your movie has a special surprise in it also. I think Lloyde ought to be in it. I've been acting in a lot of my protégé's films and the young fans. I was in,…a guy in Kansas made a film, Chris…I can't remember his name but the movie was called "Zombiegeddon." I play a janitor in the school and I get killed by zombies. I'm in another very good film in LA called "The Janitor" made by Troma fans where I play a homeless drunk and I get my arms cut off. I have a very distinguished acting career. The fact that I'm in these movies helps. For instance, Barak Epstein, who did his first 35mm movie, I did the movie for free. I do everything for free. But he was able to tell Mary Woronov, who worked in my movies and Rhonda Shearer, who's a buddy of ours from "Up All Night." When they heard I was in it, they worked for him for very little. So, if I'm in the movie, it will help get other names.

RW: Both you and Roger Corman have helped many young filmmakers get started.

RW: (laughs) So you don't take yourself serious.

LK: Well, I take our movies very serious. I don't take the business serious. It’s the moves. It's an art form. It's art. And it also happens to be a business. I think one of the reasons that Troma has been around for 30 years is that we abide by Shakespeare's dictum with the emphasis on the 'dick,' 'To thine own self be true.'

A fan comes up with a DVD to sign.

LK: Oh, this is great one. This is a very good movie. And now that we've got a lot of war going on in our lives I think it has a special significance. What's your name?

LK: Are you glad that we went to war in Iraq?

Fan: I don't care one way or the other.

LK: But you have to admit that every time you hear about some of them Arabs getting shot you feel good. Right. Come on, admit it. And when you hear of a couple of Israeli kids get blown up on a bus. Thank you George Bush, right. Feel real good. Take your SUV and get five miles per gallon folks. Let's buy 'People' magazine, which encourages $50,000.00 gowns to be worn at the obscene Oscars. Let's see another couple of planes... Let's brag about it and shove it in people's faces and maybe we'll get a plane crashed into DragonCon. Huh. Thank the good Lord for Troma! Giving the right values! Good values! Sex and violence. No, no, just kidding. Social satire.

LK: I've written a book: "Make Your Own Damn Movie!" Published by St. Martins Press. Just came out, now in its second printing. It's aimed at people who want to learn about filmmaking and learn how Troma raises the money. How we find our scripts. How we write our scripts. How we distribute our movies. It's "Make Your Own Damn Movie." It's quite a good book. You can get it at Barnes & Nobel or Borders. It's fun for film fans as well as filmmakers.

"Make Your Own Damn Movie!" will also tell you how to get people naked! How to get your women naked! We don't say women we say Gynos.

Jason, Justin and everyone around laughs or groans. For those who are unaware, NAMBLA is a pedophile organization. Like I said, Lloyd Kaufman is an experience, not an interview.

LK: Troma felt that we could widen our audience by appealing to some nice young people. So these guys convinced me to that we should join.

What? What? They told me NAMBLA was a Shakespeare society! Some New Age, something. Veegan Shakespeare!

Robert Burden, the creator of "The Flaming Carrot" walks up and breaks up Mr. Kaufman's shtick.

LK: Hey Bob. Here's a giant in the industry. "The Flaming Carrot." He liked the company so much, he bought it! You should interview him! People line up around the block for him. A gentleman and a genius.

Mr. Kaufman introduces Mr. Burden to the hot blond I have been fantasizing about for the last ten minutes.

LK: This is Nicky, by the way.

Bob Burden: Nice to meet you.

Interviewer's lustful thought: (Now I have a name to go with the fantasy!)

Bob: Have a safe trip.

RW: What's next for you?

LK: "Tales From the Crapper." Lila was here. She wrote the theme song. We performed it two nights ago. "Tales From the Crapper," the upcoming Troma movie had the world premiere of the title song by Lila Sullivan. She brought her harp and played it two nights ago. The theme song from "Tales From the Crapper." Troma, as a public service, did that and I have to admit, DragonCon didn't really give us much respect. I think bringing a harp, and playing a harp and doing a very witty song Cole Porter style. I don't see Miramax doing any public services. You know what I mean! Well, anyway, Troma is! Thank the good Lord for Troma!

RW: We know who has heart around here!

LK: Thank you. It's full of potassium. And Troma put the 'ass' in potassium!

Lloyd is getting ready to leave Atlanta, so we take a few pictures for the story. I luck out. Nicky wraps herself around me for the photo. What a soft little body. Of course I'm distracted because Mr. Kaufman tells Nazi Boy to grab my crotch. This has been a wild experience.