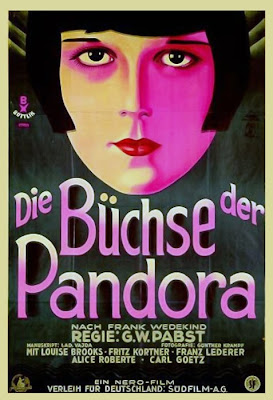 I first read about "Pandora's Box" in Danny Perry's incredible book, Cult Movies nearly 20 years ago. As with most of the movies in that book, I've tried to see them all. It took a long time, but thanks to Peter Kavel's Silent Screen Classics, I finally got to see this dark German masterpiece. Ripe with sexual tension, "Pandora's Box" follows Lulu (Louise Brooks) as she unwittingly leads all around her to their destruction. Lulu is one of those one in a million women who has IT. Lulu is full of life. She sees no reason why she should subscribe to the hypocritical notion that only men can live life freely and fully. Like Bridget Helm's character in "Alurane," Lulu wants the world and she wants it now. The difference between the two characters is that Lulu truly does have a heart of gold to match her body to die for.

Lulu is a young Berliner who seeks adventure. She is seeing newspaper tycoon, Dr. Ludwig Schoen (Fritz Kortner). During the film's first 10 minutes, Lulu entertains 4 men in her lush apartment. She is first seen with the meter man who she gives a drink of schnapps. As he is about to leave the old, scruffy Schigolch (Carl Goetz) arrives. The meter man gives this rascal a dirty look, but Lulu hugs him and drags him into her apartment. Schigolch rifles her purse, takes most of her money, drinks from her bottle of booze and then makes Lulu dance for him. Lulu doesn't seem to mind. It appears that Schigolch is Lulu's pimp even though she isn't a pro. The film doesn't tell what the origin of their relationship is, but for some reason Lulu puts up with the old man. Suddenly the doorbell rings. Enter Dr. Schoen. He is despondent as he explains to Lulu that he is to be married and can't see her anymore. She responds by saying "just because you're getting married, you can't kiss me?" She is laying down with her arms held up to him. He gives in even though he knows he is on the road to hell. Lulu is fine. Lulu's dog is roused from his nap by Schigolch who is hiding on the balcony. Schoen finds him and leaves in a huff. Schigolch then tells Lulu the real reason for his visit. Schigolch has a friend, Rodrigo the Great (Carl Raschig) who wants to put Lulu in his variety trapeze act. She flirts with the strong man by swinging from his massive biceps. 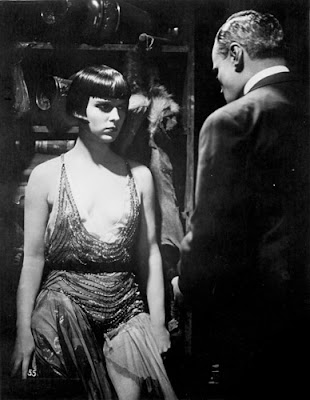 The next day Lulu goes to visit her friend Alwa (Franz Lederer), the son of Dr. Schoen. Alwa is a show producer. As Lulu arrives, she finds him in a meeting with Countess Geschwitz (Alice Roberts), who has designed costumes for Alwa's next show. The Countess glows as Lulu complements her drawings and asks her to design a costume for the trapeze act. As Lulu and Alwa talk in the corner, the Countess looks on in jealousy. The two friends are embracing. Lulu says to Alwa, "You are my only true friend, you are the only one who doesn't want something from me." Alwa doesn't say anything, but his look lets the viewer know that he wants Lulu. As for the Countess, she's not jealous of Lulu, she's jealous of Alwa. She wants to hold Lulu in her arms. The screen's first lesbian, Countess Geschwitz falls to her doom just like all of her male counterparts in this film. This is no "read between the lines" lesbian either. It is refreshing to see a character portrayed honestly in such an early film. Her character was cut out of most prints during the film's initial release. Pabst was ahead of his time. Lulu and Alwa go into his father's study. Lulu sees a picture of Dr. Schoen's fiancee on the desk. As she is looking at it, Dr. Schoen comes into the room and tells Lulu that she was never to come here again. She says she is not here to see him and gives Alwa a kiss as she leaves. Alwa asks his father why he doesn't marry Lulu. "You don't marry girls like that" is the Doctor's hypocritical response. Dr. Schoen asks what Lulu is up to and Alwa tells him about the trapeze act. Dr. Schoen tells his son that he should put Lulu in his review, which his newspaper will make a success. 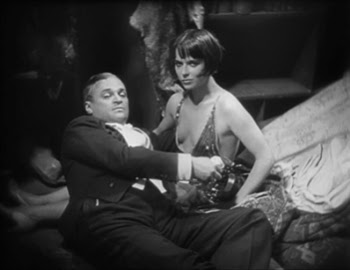 On opening night of Alwa's show, Dr. Schoen shows up with his fiancee. Lulu refuses to go on with "that woman" watching. Dr. Schoen roughly drags Lulu into a back room. She overcomes him with her sexuality and the two are busted by the good Doctor's fiancee. Quick cut to the wedding, only it's Lulu dressed in white. All the characters are present. Lulu is sexually propositioned by nearly every main character. Countess Geschwitz asks Lulu to tango. Dr. Schoen cuts in on their dance. Lulu is oblivious to the tension she causes, but she welcomes and is flattered by all advances including Countess Geschwitz's. All of this tension has to find a release. Before the marriage can be consummated (like it wasn't before the vows were exchanged!) Dr. Schoen realizes that everyone including his Son wants to get into Lulu pantaloons. The night ends with a bang as Dr. Schoen is shot and killed. The remainder of the movie deals with Lulu's trial, escape and descent into depravity ending with a redemptive meeting with Jack the Ripper. 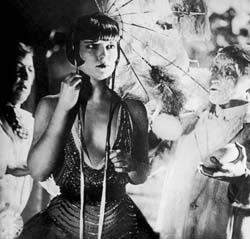 Lulu's power over others comes from her free-spirited style of living. She has that intangible something which draws people like a moth to the flame. That something isn't a pose or a facade; Lulu has been blessed with an inner joy and childlike lust for life which makes more jaded characters realize how far they have fallen. They will risk anything to try and capture Lulu's essence because they feel it will bring them to some state of grace they lost years before. Unfortunately for them this is an impossible task. One by one they are destroyed by their superimposed desires which pull them to Lulu. 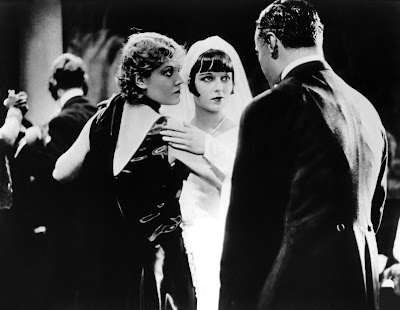 The films ending is haunting and powerful. Realizing that she and her remaining entourage are doomed unless something changes, Lulu decides to sell her body to feed the others. She walks out into the London fog where she meets her first trick, Jack the Ripper (Gustav Diese). What follows is beautiful and terrifying at the same time. Lulu's gift shines through in this last sequence. Such is life. 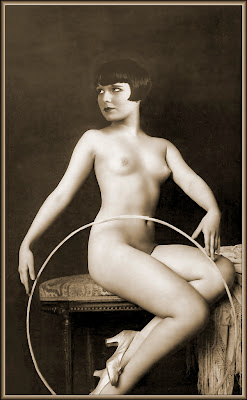 The acting is quite good. Missing is much of the melodramatic hamming that is present in so many silent movies. Pabst adapted the film from two plays by Wedekind. Along with F.W. Murnau, Pabst was a master of lights and shadows. As Lulu and her cohorts sink further and further in depravity, the film's tone changes from light to dark, until the final scenes in London are almost opaque. The characters are all fleshed out and three dimensional. This goes for the minor characters as well. In the few brief minutes of screen time at the end, Gustav Diese shows what it must be like to be a monster at war with one's own humanity. His Jack the Ripper is a creature torn by inner conflict. Such attention to detail on Pabst's part has made "Pandora's Box" one of the all time greats from the silent screen.