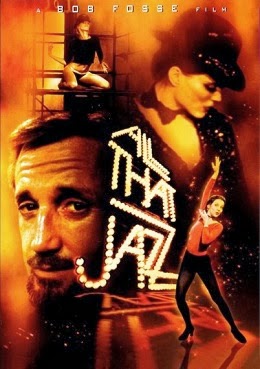 Joe Gideon juggles opening a new play, post production on a "Lenny" type film, an ex-wife (Leland Palmer), current girl friend (Ann Reinking), new lover (Deborah Geffner) and preteen daughter (Erzebet Foldi). Beneath the surface, Gideon masks his fear with dexedrine and promiscuous sex. Throughout it all, Gideon's biggest obsession is with death. Gideon and Death/Angelique (Jessica Lange) flirt with each other in a series of fantasy/flashback sequences throughout the film. What could have been a relentlessly depressing movie is in fact a fascinating, entertaining and emotionally powerful look into the world of Bob Fosse's inner demons. Mr. Fosse was extremely brave to bare his soul in such a way. Roy Scheider has never been better.

In addition to powerful performances all around, "All That Jazz" boasts outstanding photography, sound and editing. There are a number of classic set pieces. The film's opening 'cattle call' set to George Benson's version of "On Broadway" is probably the film's most famous sequence. Another standout is the first script read through. The focus is on Gideon. The only sounds heard come from Gideon as he smokes, taps his fingers and drums a pencil. The scene shows a man on the edge of oblivion. Powerful filmmaking. "All That Jazz" is also a very erotic film. Gideon will sleep with anything that movies. His sexual obsession works its way into the Broadway show he is choreographing. The 'AirRotica' dance number is wild. Sandahl Bergman is a standout in the sweaty number.

Picture Quality: 9/10
I noticed one instance of pixilation. There is a slight shimmering problem during the 'cattle call' sequence. The stage background is very cool, made up of a pattern of pipes against the wall. The design lends itself to the shimmering problem. Otherwise, a wonderful transfer.

Sound Quality: 10/10
Even though the soundtrack isn't done in 5.1, all is fine. The musical score won the Oscar. Both the original songs and found music are perfect. Nice balance between the ranges.

Extra Features: 8/10
I was amazed at the number of extras found on this DVD, considering the fact that it only cost $14.98. In addition to the original theatrical trailer, the DVD includes a short interview with Mr. Scheider. Mr. Scheider also provides a scene specific commentary track. I really like the fact that Fox included a commentary track menu. You can go directly to eight specific scenes that Mr. Scheider comments on. The DVD also includes five clips shot on the set of the 'cattle call' sequence, which show Mf. Fosse at work setting up the scenes and working with the actors.

The Final Word:
"All That Jazz" is one of my favorites. This is a powerful, artistic and challenging film. A Must Have DVD!
Posted by obitguy at 9:15 AM