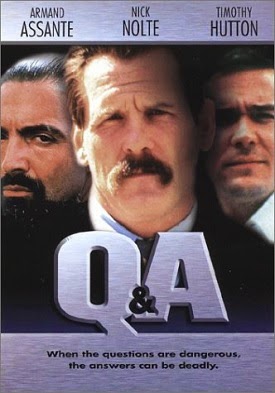 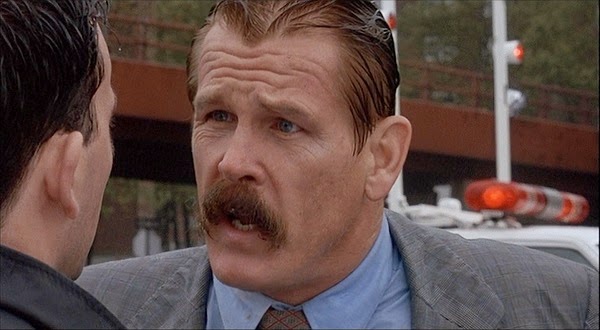 Nick Nolte gives the performance of his career in Sidney Lumet's brutally disturbing cop drama "Q & A." That Mr. Nolte wasn't nominated for an Oscar for this performance is a disgrace. "Q & A" is not for the squeamish. Lumet's tale of corruption and the search for truth was a brutal forerunner of Michael Mann's "Heat" and the TV series "NYPD Blue." 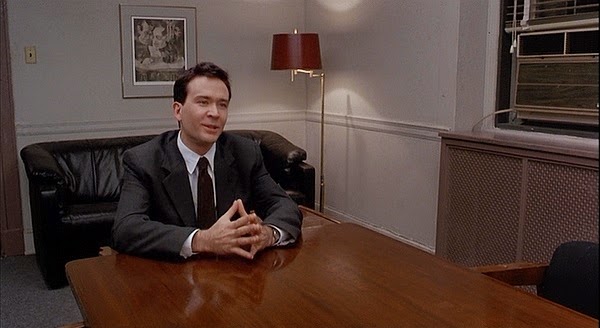 Detective Lieutenant Mike Brennan (Nick Nolte) is the most decorated cop in the NYPD. He is also corrupt to the core. The overweight behemoth cold-bloodedly murders a Spanish drug dealer. The rogue cop uses a throw down and calls for backup. 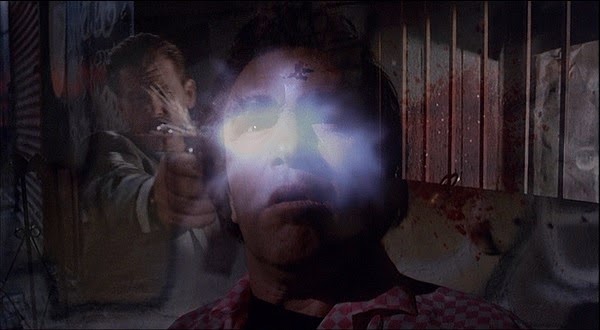 Assistant District Attorney Al Reilly (Timothy Hutton) is awakened by a phone call from his new boss. Homicide DA Kevin Quinn (Patrick O'Neal) tells Al that he is needed to question witnesses to a police shooting. Quinn picked the new DA for this assignment because he is Irish and a former cop. Quinn says that this is a clear case of justifiable use of police force. After all, Mike Brennan is the kind of guy you think of when the term "New York's Finest" is said. Al is warned to protect the record: "If it's not in the Q & A, it didn't happen." 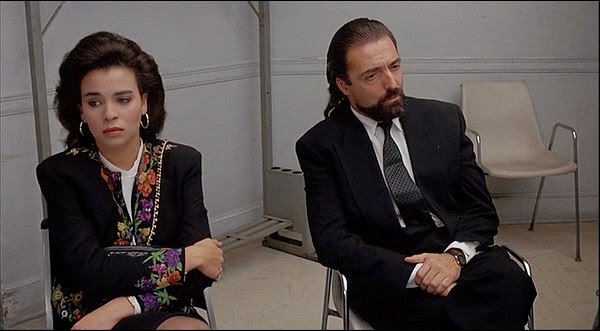 Al meets Detectives Luis Valentin (Luis Guzman) and Sam "Chappy" Chapman (Charles Dutton), who are handling the investigation. Chappy is a former marine who served with Brennan. Valentin is a hotheaded cop who is idealistic and honest. Several mobsters were inside the club where Brennan murdered the drug dealer. They are called in by All and the two detectives. Bobby Texador (Armand Assante) is a Puerto Rican drug dealer. His girlfriend, Nancy (Jenny Lumet) is Al Reilly's former fiancÃ©e. Valentin disrespects Bobby Tex in front of his old lady. The two men argue and Bobby Tex throws suspicion of the pat story told by Mike Brennan about the shooting. Al let the Q & A become infected with evidence which will lead to the deaths of many characters in this movie. Can the rookie DA and his detective assistants buck the system and take down New York's most decorated cop? 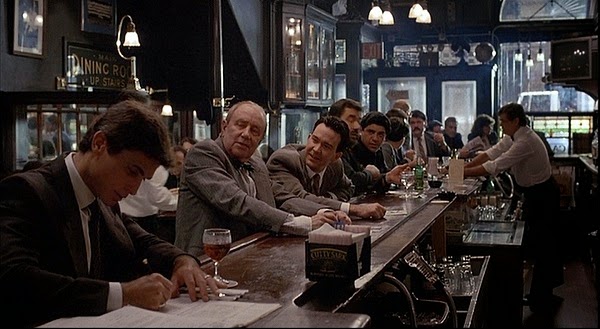 "Q & A" is an uncompromising examination of corruption, bigotry, homophobia and moral courage. Nick Nolte is as imposing as any monster that ever graced the silver screen. Nolte gained nearly 50 pounds to play the part. His tough Irish accent is right on target. Nolte's extra weight adds immensely to his performance. He is able to transform his face from cherub-like innocence to terrifying rage at a moment's notice. Nolte's Brennan is the type of cop you hope you never meet. He hates everyone. He takes from men in powerful positions. He doesn't hesitate to kill anyone who dares to threaten him. During one disturbing scene, Brennan calls several prostitutes to him on a street corner. Brennan is looking for a transvestite hooker who can put him in danger. One of the prostitutes is a man in drag. Nolte reaches into his pants and crushes his testicles to make him talk. Though Brennan is homophobic, he also has strong latent tendencies. Nolte's performance is psychologically complex. It rivals Harvey Keitel's performance in "Bad Lieutenant" for shear outrageousness and bravado. 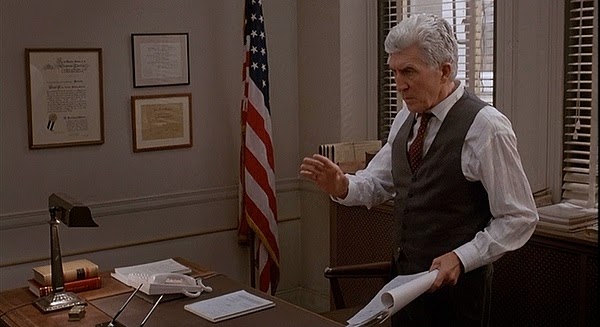 Patrick O'Neal is pure evil. His Quinn is a perfect portrait of the dangers of too much power in the wrong hands. The scene in which Timothy Hutton's Al has lunch with DA Leo Blumefeld (Lee Richardson) is wonderful. Bloomfeld tells a story about Quinn as a young DA. Blumefeld accents the horrible story with the epitaph "Fuck him, now and forever." You will feel the same way after seeing this film. 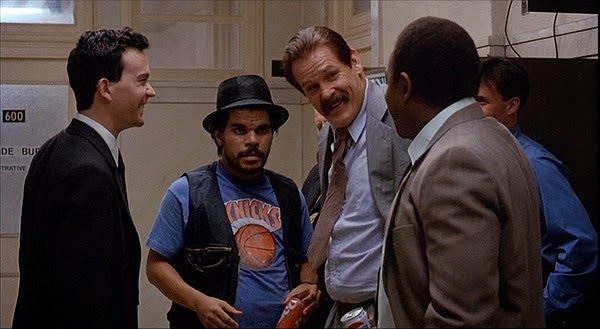 Armand Assante was nominated for a Golden Globe as best supporting actor as Bobby Tex. I will always wonder why an actor of Assante's talent and looks isn't given better roles. Maybe some young director like Quentin Tarantino will rediscover him the way Robert Forester was in "Jackie Brown." Bobby Tex is aware that Al and Nancy had a thing once. Bobby tells Al he will kill him if he catches him sniffing around his girl. The irony is that Bobby and Al may end up having to rely on each other when Brennan goes on the warpath. 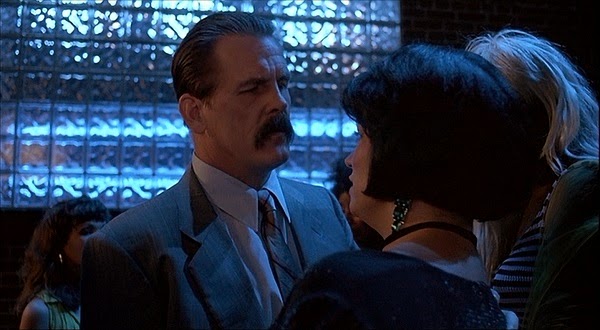 If "Q & A" has a weakness, it is the romantic subplot between Al and Nancy. This is an urban war film. The attempt at romance slows the story down. The film would have been better with 15 minutes cut from the running time.
The Disc
Great film, picture and good sound. No extras, but the price reflects the vanilla DVD status.

Picture Quality: 9/10
Andrzej Bartkowski's cinematography captures the story's gritty, realistic tone. Bartkowski also shot Lumet's "Prince of the City." The film uses muted colors and dark tones. No artifacts found. No delineation problems. The DVD looks almost a good as the movie did in the theaters.

Sound Quality: 8/10
The only other complaint I have about the movie are the songs by Ruben Blades. I've enjoyed his music in other venues, but this music is really bad. There is no loss of dialogue. At times the higher ranges sounded a bit flat. Nice balance between the ranges.

Extra Features: 0/10
There are no extras. The DVD only cost $14.98, so you don't miss the extras. I enjoyed the director's commentary by Sidney Lumet on the DVD of "The Verdict." I would have enjoyed hearing what he and Nolte might have had to say about this film. Maybe if the DVD makes a ton of money, FOX will issue a special edition.

The Final Word:
If you like cop dramas, you will love "Q & A." Those who want to see the performance of a lifetime by Nick Nolte should also check it out. Not for kids.