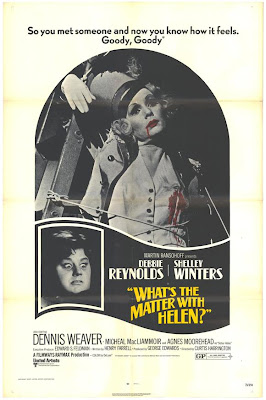 Harrington's 1971 film "What's the Matter With Helen?" is a lavish homage to 1930s Hollywood in the guise of a psychological thriller ALA "Whatever Happened to Baby Jane?" Full of period details which reveal Harrington's knowledge and love for the period, "Helen" works on a multitude of levels. It is a thriller with many suspenseful scenes. It is part musical with an uncanny sendup of the grand musical numbers of the 30s. It is also an excellent character study of women in conflict with each other and world in general.

Adelle Bruckner (Debbie Reynolds) and Helen Hill (Shelly Winters) are friends brought together by a common tragedy. Their sons were convicted for the mutilation murder of a local girl. Adelle is a platinum blonde hottie who teaches dance classes. Helen is a dowdy Bible thumper who plays piano at Adelle's studio. As the two women leave the courtroom following their sons' convictions, Helen is slashed by an unseen party in the crowd. The attack is followed by several threatening phone calls. The two women decide it's time to change their last names and leave Iowa for Hollywood. Adelle intends to open up a dance studio for children. She figures that somebody has to teach the Shirley Temple wannabes, so it might as well be her. Adelle is up on every bit of the latest Hollywood gossip. Helen says that the last movie she saw was Cecil B. Demille's "Sign of the Cross" which came out several years before the story. 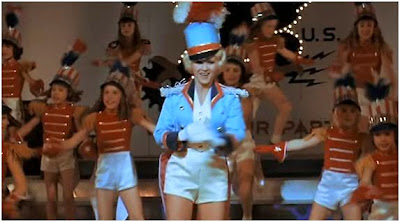 Once in Hollywood, Adelle's studio takes off right away. He studio is filled with 20 or so brats of varying degrees of talent. All the children wear the same uniform except the child of single millionaire Lincoln Palmer (Dennis Weaver). Adelle woos Lincoln. He agrees to finance a large scale talent review in a real theater for the talent scouts from the various studios. Helen sits in the background playing piano for the girls and rasing rabbits behind the studio. She has a weird habit of going into a trance whenever she sees sharp blades. 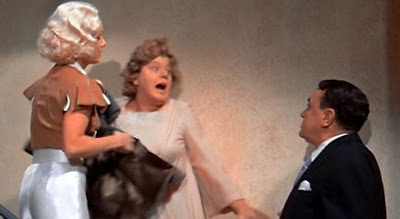 The threatening phone calls begin again. Helen sinks into a state of guilt ridden religious mania. She takes to listening to radio evangelist Sister Alma (Agnes Moorehead) for solace. Helen seems to have something darker than fear of an unknown attacker in her background. 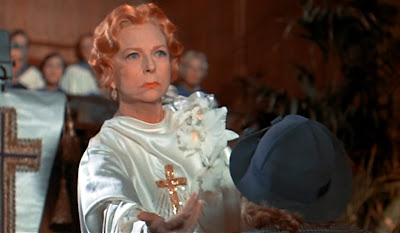 As the various plotlines pan out, the viewer is treated to a multitude of great performances, witty lines, eye pleasing production design and the highlight of the film, "Adelle's All Star Kiddie Review." This three song musical set piece begins with a recreation of Shirley Temple's song "Animal Crackers in My Soup." As good as this number is, the followup take off on Mae West singing "Oh, You Nasty Man!" is hilarious. The girl in a heavily padded dress goes through her routine as her behemoth of a stage mother mimics her every move backstage. The third number is a patriotic tribute to Uncle Sam. As Adelle joins the girls on stage for the finale, Helen is overcome by visions of death backstage. She lapses into a pile of emotional goo, screaming at the top of her lungs. Helen has come to the end of her emotional tether. All the how's, whys and wherefores, I'll leave to you to discover. "What's the Matter With Helen?" is grand entertainment which delivers the goods on many levels. It is my favorite of Harrington's films, and according to Mr. Harrington it is his favorite also. 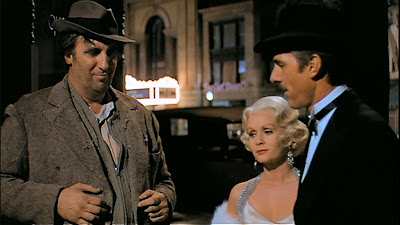 The performances are uniformly fine. Debbie Reynolds delivers one of her best performances ever as the Hollywood hottie stuck with a morbid and mad business partner. Watching "Helen" one sees where her daughter got her looks. Ms. Reynolds is in fine shape, and cuts a sexy figure in the period gowns. Ms. Winters is perfect as the lumbering Helen. While her character isn't given as much to do as far as dramatic range is concerned, Ms. Winters nails Helen to a tee. I've known more than my share of people suffering from religious mania, it just seems to happen a lot in the South! Helen is a picture perfect portrait of a lost soul who is in need, but unfortunately doesn't have a trustworthy shepherd to lead them. Agnes Moorehead is great in a cameo as Sister Alma. While, Sister Alma's radio broadcasts dominate the film once the action moves to Hollywood, she only has one scene in person. In that one scene she paints a vivid portrait of the phony evangelist more interested in the collection plate than the true harvest of souls. The character is based on real life radio evangelist from the 30s Aimee Simple McPherson. One of the standout performance of the film is by character actor Micheál MacLiammóir as Hamilton Starr, a great ham actor who joins Adelle's business as a diction coach. His caustic asides provide several of the movie's best laughs. He also has a creepy effect on Helen which is fun to watch. 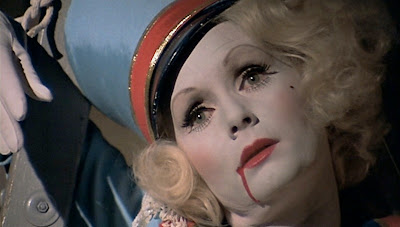 Unfortunately "Helen" was thrown away by the studio. Like many of Harrington's films, it received little or no studio support upon release. This is one of the great undiscovered films of the early 70s. Rent it or buy it, but by all means see this if you have the opportunity. It is great entertainment.