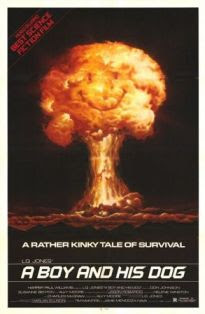 L.Q. Jones' "A Boy and His Dog" was one of the quintessential cult films of the 70s. I must have seen the movie 20 times during high school. Based on a Harlen Elison novella, "A Boy and His Dog" is a biting satire set in 2024, following WWIV. "A Boy and His Dog" tells the tale of a solo named Vic (Don Johnson) who scavenges the barren wastelands in search of food and women. Vic would be lost without Blood (Tim McIntire). Blood is the brains of the outfit, while Vic provides the brawn. Blood is educated, funny, intelligent and he has an innate ability to find women. Did I fail to mention that Blood is a telepathic, talking dog? The original ad campaign for Christopher Reeve's first "Superman" film said, "You will believe a man can fly!" With "A Boy and His Dog," you will believe that a dog can talk. There is no problem with the willing suspension of disbelief.

Shot in magnificent widescreen photography, "A Boy and His Dog" is a forerunner of George Miller's "Mad Max" series. "The Road Warrior" owes more than a little to this great film. I'll provide little more than a rough thumbnail of the plot as this movie deserves to be discovered afresh. This is one of those movies that I'd give a money back guarantee if I were a rich man.

Vic provides food for Blood and himself. In exchange for the food and companionship, Blood leads Vic to women, warns him of potential marauders and educates the feral man-child. As Vic raids fellow scavengers, he is watched from afar by a mysterious trio. The trio wants Vic for something. I won't say what. To trap the crafty Vic, the trio sends the best kind of bait: Quilla June Holmes (Susanne Benton). You'll have to watch to learn any more about the plot.

Mr. Jones and producing partner Alvy Moore spent five years bringing this gem to the screen. "A Boy and His Dog" is an obvious work of love. In an interview with director Jones, he told me that people needed to see the movie four times to catch all of the movie's subtleties. I say you can watch the movie over and over because it is so funny. "A Boy and His Dog" is filled with biting satire. The film starts with a placard that reads "WWIV lasted five days...politicians finally found a cure for urban blight." Jones adapted Elison's novella after Elison came down with writer's block. Elison told Jones that the film captured his story. The two had a dispute over the film's hilarious final line, but otherwise Elison was pleased. Mr. Jones' final line works much better. This is due to the fact that L.Q. Jones works in the medium of film. 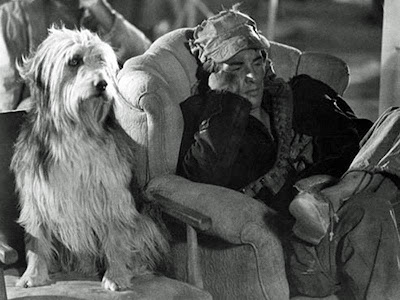 L.Q. Jones never directed another film. This is a shame as he learned his craft well from such mentors as Raoul Walsh (White Heat), Sam Peckinpah and John Ford. John Morrill's widescreen photography is reminiscent of the great Spaghetti Westerns of Sergio Leone. Jones and Morrill make incredible use of the widescreen format.

Don Johnson is young and hot in this film. It is easy to see how he charmed the pants off of the young Melanie Griffith back in the day. When judging his performance, remember that he was acting with a dog. The dog's line were later looped in by Tim McIntire. Blood holds our attention, and has the best lines in the film. But as the movie was being shot, Don Johnson was acting with a silent dog. It is a wonderfully funny performance. Susanne Benton is also very ripe. The sexy actress is best known for this film and her cameo as "Dreedle's WAC" in Mike Nichols' misfire "Catch-22." She seems to have disappeared from film. That is a shame as she had both sex appeal and intelligence. The always great Jason Robards delivers one of his usual fine performances.

The star of the movie is Blood. The dog itself was the same dog from "The Brady Bunch." His voice was provided by the great Tim McIntire. Mr. McIntire delivers an unforgettably charismatic performance as the evil Waco in that film. On the commentary track, director L.Q. Jones reveals that James Cagey was considering coming out of retirement to provide the voice of Blood. Jones decided against it as having such a high profile actor do the voice would distract from the film. Tim McIntire has just the right tone and delivery to make the film believable. His sarcastic dry performance steals the show. In addition to providing the voice of Blood, McIntire did half of the musical score. McIntire scored the aboveground scenes, bringing along friends like Ray Manzarek of The Doors to help. "A Boy and His Dog" deserves its Cult Classic status. It is a gem worth rediscovering.

Picture Quality: 6/10
Director L.Q. Jones told me that there are plans to restore "A Boy and His Dog" for a theatrical re-release. Until then, this print is the best there is. 85% of the film is fine. However, there are a number of artifacts during the film's darker scenes. There are no major delineation problems. The color is very good. They just need to clean up the print. The excellent widescreen photography deserves to be restored to its original majesty.

Sound Quality: 7/10
You don't miss any of the dialogue. At times the mono track is a bit flat and tinny at the top end of the ranges.

Extra Features: 10/10
The commentary track provides an ton of information about the film's history. Director Jones is joined by top film critic Charles Champlin and DP John Morrill. Photography fans will really enjoy this commentary track as Jones and Morrill share a lot of secrets concerning widescreen photography. Mr. Champlin provides great insights as to the movie and its impact, including the heat it took from many feminists.

There are two trailers for the film. They are very cool. The DVD also includes sneak peeks for other First Run Features.

A must have for 1970s film fans. This is a one of a kind movie that gets better with every viewing.
Posted by obitguy at 8:55 AM