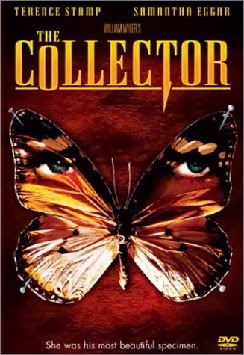 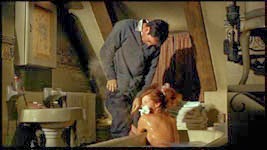 Freddy Clegg (Terence Stamp) is a quite, lonely bank clerk. Freddy's life is consumed by tedium. He collects butterflies. His hobby becomes his entire existence. Freddy finds this unfulfilling. Freddy wants more out of life. Freddy wants a woman. The vivacious Miranda (Samantha Eggar) catches Freddy's eye. Freddy is fortunate in one respect. He won a football lottery and is now independently wealthy. Freddy buys a secluded estate and furnishes it for his next acquisition. With the help of a van and some chloroform, Freddy convinces Miranda to spend a little time with him.

William Wyler's "The Collector" was adapted from the novel by John Fowles. The movie was cutting edge in 1965. The production code was withering on the vine. Sexual issues including rape were being treated in a more open fashion. "The Collector" deals with a gentlemanly stalker, if there is such a thing. Freddy wants Miranda to fall in love with him. He traps her in a well-furnished dungeon. He tries to charm her with his manners and kindness. The relationship takes some unusual twists and turns. The ending is very creepy.

Viewed today, "The Collector" seems tame. While both Terrence Stamp and Samantha Eggar deliver powerhouse performances, the psychosis of this film seems almost quaint. With the murder of John Lennon and Rebecca Schaffer by stalkers, it is hard to view "The Collector" with an open mind. It seems that the filmmakers want you to feel some compassion for the demented young Freddy Clegg. I just wanted Miranda to kill the freak. "The Collector" is worth watching for the great performances of the lead actors. Ms. Eggar is wonderful as the outgoing art student. In real life, it seems that such fully alive people seem to draw stalkers to them. Terrence Stamp gives a very controlled performance. His Freddy is conflicted beyond belief. He acts like Prince Charming, but Ted Bundy is ever present just below the surface. He wants Miranda to love him. When she finally submits willingly to him, he rejects her as a whore. 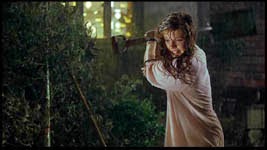 "The Collector" was nominated for three Oscars. Both Ms. Eggar and Mr. Stamp won Best Acting awards at Cannes. Ms. Eggar also won the Golden Globe for her performance.
The Disc
Good movie and picture. Fair sound. No extras. A bit high priced for a vanilla DVD.

Picture Quality: 9/10
Columbia did a nice job restoring "The Collector." The movie colors are rich and deep. There were no artifacts or pixilation. I noticed a couple of delineation problems. The darker colors tended to fade out near the edges of the frame in a few spots.

Sound Quality: 7/10
The movie isn't sound effects driven. There is one scene involving a thunderstorm that would have benefited from surround sound. The sound was flat at times. The music by Maurice Jarre is good. It could have used a little more bass.

Extra Features: 2/10
There is a theatrical trailer for "The Collector." It is of interest to those who like to see how movie advertising has changed over the years. There are also trailers for "Panic Room" and "Enough."

The Final Word:
"The Collector" is worth the price of a rental. Whether you want to collect this one for your permanent library will depend on your personal tastes. Over-priced for a vanilla DVD.