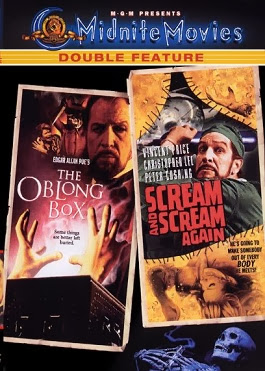 Review
On August 27, 2002, MGM will release several Double Feature DVDs. These DVDs will feature some of the best (and one stinker!) horror films from the 60s and 70s. This is one of the best of the series. Both of these films were directed by Gordon Hessler and star Vincent Price and Christopher Lee. 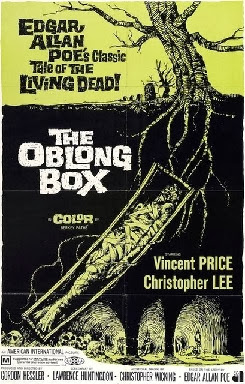 This movie was to be the fourth directorial effort of Michael Reeves (The Witchfinder General. Reeves was one of the most promising British horror film directors of the era. Unfortunately, Michael Reeves killed himself during pre-production. Gordon Hessler took over direction and produced an excellent period shocker.

Sir Edward Markham (Alister Williamson), is captured by a tribe on his African plantation. He is nailed to a tree by the witch-doctor and disfigured in a revenge ritual. Sir Julian Markham (Vincent Price) rushes to the scene, but is to late to save his brother. Cut to Julian's English estate.

Julian keeps Edward locked in an attic bedroom. Edward's mind has been twisted by the undeserved fate which befell him. Attorney Samuel Trench (Peter Arne) is working on a plot to free Edward and cure him. Trench has hired a rival witch doctor to drug Sir Edward so Julian will think he is dead. Then all he has to do is steal the body, have the witch doctor revive him and reverse the disfiguring curse. The best laid plans of mice and men.... Sir Edward ends up being buried alive.

Fortunately for Sir Edward, local Doctor Nuehart (Christopher Lee) needs fresh corpses to perform medical experiments. A couple of Burke and Hares dig up Sir Edward. The rest is for you to discover.

"The Oblong Box" purports to be based on Edgar Allan Poe's "The Premature Burial." Phil Hardy's excellent reference book "The Overlook Encyclopedia of Horror Films" states that the movie is closer to the works of H.P. Lovecraft. I agree. The horror is largely implied. Sir Edward's disfigured face isn't revealed until the end of the movie. Sir Edward's acts of revenge are brutal and rapid. They seem more savage due to the killer's refined speech and manners when he isn't killing those who ruined his life. Director Hessler quickly followed this film with an interesting mix of horror and science fiction called... 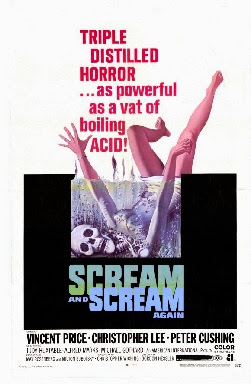 The flip side of the DVD features the only screen paring of horror kings Vincent Price, Christopher Lee and Peter Cushing. Peter Cushing's role is just a one-scene cameo though. Cushing never actually shares the screen with either Price or Lee in this film. In one of the great film goofs, actor Marshall Jones is identified as "Peter Cushing" in the film's trailer!

"Scream and Scream Again" is a disconcerting movie experience. The film jumps from location to location with little sense of continuity. At first we see a jogger collapse with chest pain. Next we are in the political headquarters of a communist country. Next we are viewing the police inspection of a sex crime in England. We return to the jogger, only to find him waking up in a bed with a leg missing. We watch him shrink more and more as the film goes on. Director Hessler ties all of the various threads together in what could be called "1984" meets "Dracula" meets "Frankenstein" meets "The Rise and Fall of the Third Reich." The less said about this film's plot, the better. All the better for you the viewer as "Scream and Scream Again" is a fresh and unique film.

Police Inspector Bellaver (Alfred Marks) is investigating a series of sex crimes in which the female victims have been drained of blood. The latest victim worked at a secluded medical lab run by Dr. Browning (Vincent Price).

Keith (Michael Gothard) is a lanky Mod, enjoying London in the swinging 60s. Lots of beautiful young women to seduce and kill. The police finally locate Keith by using an undercover police woman. There is a very exciting, extended car chase, as Bellevar and his men close in on Keith. Possessed with super human strength, Keith kills one office and runs up the side of a rock face as if he were a spider. Near the top, he slips. While Keith is stunned, the police cuff him to a patrol car. When Keith awakes, he rips his own hand off to escape. The chase continues straight to the many secrets this movie hold for you.

According to Phil Hardy's "Overlook Encyclopedia of Horror Films," this movie was highly praised by German director Fritz Lang. There are similar themes between "Scream and Scream Again" and Lang's classic silent film "Metropolis." This film doesn't rise to the level of Lang's masterpiece, but it is a very effective mix of horror and science fiction.

Alfred Marks is great as the top cop on the case. He barks orders and shows contempt for stupidity with the best of the screen tough guys. Vincent Price and Christopher Lee are rock solid as the mad doctor and the head of British intelligence respectively. The beautiful Yutte Stensgaard (Lust For a Vampire) makes a short and fully clothed cameo as a victim of the communist torture chambers. As an American viewer, I found the car chase to be very scary because the British roads are set up in reverse of American ones. I felt that everyone would be killed because they were all driving on the wrong side of the road!

John Coquillon's beautiful photography perfectly captures the old English atmosphere. There are no delineation problems during the film's many dark scenes. The colors are vivid and bright. The only problem with such vivid colors is the fake looking blood. I noticed a couple of artifacts. Excellent flesh tones.

John Coquillon's camerawork on this film isn't as lush. The film has an oporessive look in keeping with it's theme. This is deliberate on the filmmakers part. Both movies have been remastered. If you compare the movie with the trailer that is included, you will see how much better the remastered picture is than the original source material. Again, there were a few artifacts. There was some delineation problems during a murder scene which takes place in a dark tunnel. All in all, the picture is very good. The flat colors set the tone for the film's totalitarian themes.

Sound Quality: 7/10
Both movies are in Dolby Digital mono. The soundtrack of "The Oblong Box" was fresher. There was less of a need for fancy stereo sound. "Scream and Scream Again" was set in modern times. The music borders on unbearable. There are several scenes which take place in a disco. The music by "The Amen Corner" is some of the worst in film history. I don't know if 5.1 surround sound would help. There is no distortion and all of the dialogue is easily heard. Nice balance between dialogue and music.

Extra Features: 2/10
All you get are trailers for the movies. That's OK when you consider that you are getting a couple of great horror films for about $7.50 each.

The Final Word:
Horror fans should rejoice at this DVD. Two great movies from the golden age of horror for less than $15.00!