1950s monster movie fans rejoice, Eight Legged Freaks is about to crawl into your local theaters filled with more thrills, shocks and stereotypes than have been on display since the first Tremors. While Ellory Elkayam's spider invasion doesn't reach the cult classic status of Tremors, Eight Legged Freaks provides enough scary action to keep moviegoers jumping till school starts back up.

Prosperity, Arizona is a dying mining town. Prosperity is a desert version of the quirky town in TV's Northern Exposure. It even has a lone voice of (paranoid) reason broadcasting from a radio station based in a trailer. Harlan (Doug E. Doug) spreads government conspiracy theories and alien invasion rumors like a low-budget Art Bell. 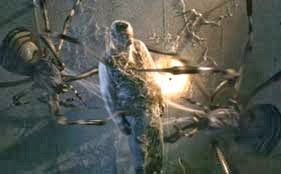 McCormack Mines are about to shut down. Wade (Leon Rippy), the mayor of Proserity has hatched numerous plots to reenergize the town's sagging economy, but all have failed. To cut his loses, Wade has allowed a chemical company to store toxic waste in the mine shafts under his empty shopping mall. Things go awry when a truck driver delivering the canned poison swerves to avoid a rabbit, spilling a 55 gallon drum of chemical death into a stream.

Mike Parker (Scott Terra) is the 10 year old son of Prosperity's sexy sheriff, Sam (short for Samantha) Parker (Kari Wuhrer). Mike is one of those genius children which seem to populate films of the genre. Mike likes to sneek over to the exotic spider farm run by the creepy Tom Noonan (Manhunter). Mike discovers that the several hundred spiders at the farm have begun to grow at an accelerated rate due to the contaminated crickets that Noonan feeds his pets. Mike is not supposed to be visiting the spider farm. His mother busts him when Mike stops by deputy Pete's patrol car as the oafish cop is cleaning up the chemical spill. Of course, Mike connects the chemical spill with the rapid growth of the spiders. However, no one ever listens to kids! 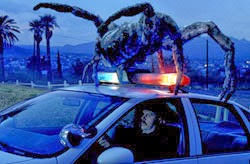 You can't have a giant-monster movie without a hero. Enter Chris McCormack (David Arquette). Chris has returned to Prosperity after a self-imposed ten-year exile. He intends to find the fabled vein of gold which eluded his dead father. Sam walks into the mine office and surprises the chain-smoking Gladys (Eileen Ryan, the mother of Sean and Chris Penn). Gladys informs Chris that the mine is three months away from going belly up. Chris also has a long-time crush on Sam the sheriff. Sam is the kind of sheriff that makes you want to undergo a body cavity search, whether you need it or not! The single mom has her hands full with Mike and her teenage daughter Ashley (Scarlett Johansson: Ghost World). Sam gives Ashley a stungun as a form of contraception. With all of the characters in place, "Eight Legged Freaks" unleashes the monsters for an hour long thrill ride.

The CGI effects run the gamut from excellent to lousy. Fortunately, there are only a couple of bad effects. There is a scene in which a hoard of jumping spiders pick off a group of dirt-bikers in the desert. Most of the scene is outstanding from an FX point of view, but a couple of the attacks almost appears to be an homage to Bert I. Gordon, the king of cheesy, giant-bug movies in the 50s. In Gordon's The Beginning of the End giant grasshoppers attack Chicago. During the finale, grasshoppers were photographed walking on still photos of the Chicago skyline. A couple of the bugs can be seen walking in mid-air ALA Wiley Coyote! The first two spider attacks have that quality. Because of the quality of the rest of the film, I have to believe this was an in-joke for movie nerds like myself. There is another scene in which a couple watches in horror as their cat is dragged inside their livingroom wall and killed by a spider. The cartoonish special effects during this scene almost ruin the entire movie. What is meant by the filmmakers to be clever only destroys whatever suspension of disbelief the audience has built up. Fortunately, bigger and better things follow which erase the bad taste of this scene.

A common theme in the monster movies of the 50s was "aliens attack the American way of life." This theme is updated to reflect the Enron/World Com age of corporate corruption. Corporate greed leads to the destruction of mankind by the mutation of nature. The "toxic spill" ploy has been used in previous horror films such as the terrible Horror of Party Beach to the cult classic Humanoids From the Deep to John Frankenheimer's preachy Prophecy. Here, the source of the arachnid mutation is nothing more than a loving wink to the films of the 50s.

How are the performances? We're talking about a giant-bug movie! The cast is fun. Doug E. Doug and Rick Overton steal the show. Doug E. Doug provides the film's slapstick comic relief while Rick Overton is more subtle. Overton's deputy Pete is a timid, lumox who doesn't realize how dumb he is. I found myself laughing every time each man was on screen, and worrying when they appeared to be in danger of dying! David Arquette has a likeable screen presence, but he wasn't strong enough to keep Doug and Overton from stealing the show. Maybe he should have studied Kevin Bacon's performance in Temors before filming. Kari Wuhrer was sexy and competent. I enjoyed Eileen Ryan's performance as the crotchety old secretary. It's easy to see where her sons Sean and Chris Penn get their talent.

The spiders also have to be considered characters in this movie. They deliever the best performances of all thanks to their CGI creators. There are a wide variety of eight-legged nasties. There are a couple of giant tarantulas, some very scary trap-door spiders and some bad-ass jumping spiders. I haven't seen this much variety in the various monsters since Starship Troopers. Unlike Arachnophobia which had me shaking out my shoes every morning before I put them on, Eight Legged Freaks delivers a different type of fright. These spiders scare the crap out of you by their massive size and numbers. My wife and daughter refused to go see the movie because they hate small crawly things. I hate spiders also, but the movie didn't play on that fear except during the first scene when they were still small.

Eight Legged Freaks has the potential to be this summer's sleeper hit. I was surprised that the sneak preview I attended wasn't full. My friend, John Beifus, who is the film critic for "The Memphis Commercial Appeal" made the same observation. He said, "maybe there aren't enough two legged freaks" that would enjoy the film. I hope there are. One thing producers listen to is the sound of money at the box-office. Tremors came out in 1990. It would be nice not to wait 12 years before the release of another monster movie as good as this one.