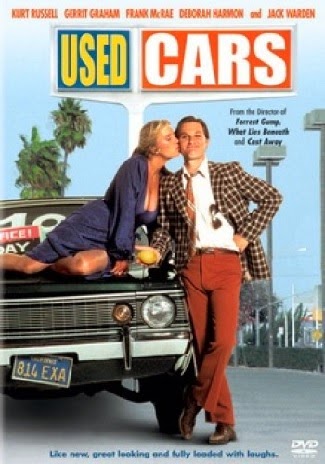 Robert Zemeckis and Bob Gale teamed up to write, produce and direct one of the bawdiest films of the 1980s. In many ways "Used Cars" is the granddaddy of the Farrelly Brother's style of humor. "Used Cars" is an irreverent send up of the unethical world of used car salesmen. No topic is taboo. Zemeckis and crew make fun of politicians, the dead and dying, frigid women, Mexican gangsters, pillars of society...you name it, there's a joke in "Used Cars" aimed at it. Made before the socialist trend toward political correctness set in, "Used Cars" exploits freedom of speech to hilariously raunchy ends.

Luke and Roy Fuchs (both played by Jack Warden) are brothers with used car lots across the street from each other. Luke owns a third rate lot, while Roy's lot is the pride of Tempe: think Cal Worthington and his dog Spot. Roy wants Luke's lot because the new freeway exit is going to be built on that property. Murder is the logical choice for Roy.

Luke's employees include Rudy (Kurt Russell), Jeff (Gerrit Graham) and Jim (Frank McRae). When Luke dies, Rudy convinces the boys to hide the body and pretend that Luke is on vacation. You see, Rudy wants to run for the State Senate, but only has half of his bribe money saved up. To complicate things, Luke's long lost daughter Barbara (Deborah Harmon) shows up looking for a family reunion.

That's all the plot you need to know. Zemeckis and Gale take the plot and hang a ton of funny gags on it. Gerrit Graham steals the show as the superstitious Jeff. The film's highlights are the guerrilla TV commercials master minded by two techno geeks played by Michael McKean and David Lander (Lenny and Squiggy to old school farts like myself). Also on hand are the beautiful silicon-free assets of Australian beauty and Penthouse Pet of the Year Cheryl Rixon. There are nice cameos by Dub Taylor, SCTV's Joe Flaherty, Wendy Jo Sperber and Marc McClure from Zemeckis's great Beatlemania movie "I Wanna Hold Your Hand," and Grand Pa Munster Al Lewis as a hanging Judge.

The Disc
The funniest film of the 1980s, good picture, sound and extras. A price that can't be beat.

Picture Quality: 7/10
There is some graininess due to the source material. It looked a bit grainy in the theaters back in the day. There are also some delineation problems during the film's many nighttime scenes. No pixilation. A few artifacts. Nice flesh tones from a time when they weren't afraid to show flesh for purely titillation purposes!

Sound Quality: 6/10
The track was mastered from the original Mono soundtrack. A bit flat at times. You won't miss any jokes as all of the dialogue is audible.

Extra Features: 9/10
I was surprised at the number of extras present on a DVD costing only $14.98. The audio track is very funny. Lots of cool stories by Zemeckis, Kurt Russell and Bob Gale.

The funniest extra is the real TV commercial for the car lot on which the film was made. Kurt Russell appears with the owner of the lot. I wonder what the car lot owner thought about the ad after he saw the film's take on used car dealers.

The extras also include a number of Radio spots, a poster gallery and filmographies.

The Final Word:
Fans of profane humor will love this. If you have only seen the censored version of "Used Cars" on TV then you have never seen the funniest film of the 80s.