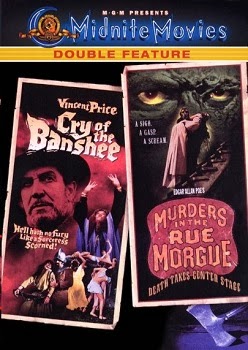 Review
I waited with great anticipation for the release of this MGM Midnight Movie Double Feature. Both of these films terrified me as a child. While "Murders in the Rue Morgue" is still a rich, rewarding film, "Cry of the Banshee" is a sadistic mess that revels in torturing naked women. Both "Cry of the Banshee" and "Murders in the Rue Morgue" were directed by British horror maven Gordon Hessler (his lineage is a bit more complex, but I'll leave at this). Hessler directed numerous horror, fantasy and sci-fi films in the late 60s and early 70s: "The Oblong Box," Ray Harryhausen's "The Golden Voyage of Sinbad" and "Scream and Scream Again." This DVD includes Hessler's best genre film: "Murders in the Rue Morgue."

"Murders in the Rue Morgue" (MPAA RATING: PG-13. DVD RATING 8/10) is Poe in name only. The complex film has been restored to its original 98 minute running time. "Morgue" deals with producer/actor Ceasar Charron (Jason Robards) and his haunted wife Madeline (Christine Kaufman). Cesar is staging a production of Poe's "Murders in the Rue Morgue." Madeline is being haunted by some very lame nightmares involving a dead actor named Rene Marot (Herbert Lom). The movie opens with a scene from the play, followed by the murder of an actor from the company. The killer is Lom returned from the dead...maybe.

"Morgue" is told on several levels. Part of the story takes place on stage, another in dreams and yet another between the world of the living and the dead. The script may seem slow to those weaned in the high adrenaline thrillers of today. For those with the patience to pay attention to plot, the trip is rewarding. "Morgue" does have its faults. The dream sequences are annoying as hell. The film may look stagy to some. That was intentional on Hessler's part. There is violence but little gore.

"Morgue" contains some excellent performances. The all-star cast includes Jason Robards, Lili Palmer, Herbert Lom, Adolpho Celi and the great Michael Dunn. Robards livens up any film he is in. "Morgue" is no exception. While "Murders in the Rue Morgue" is Hessler's best genre film, "Cry of the Banshee" is one of his weakest films.

"Cry of the Banshee" (MPAA RATING: R. DVD RATING: 5/10) returns actor Vincent Price to the world of Witchcraft. Price stared in Michael Reeves' wonderful "The Witchfinder General." "General" is one of the Top 10 horror films of the 60s. "Cry of the Banshee" pails in comparison, despite the similar subject matter.

Lord Edward Whitman (Vincent Price) rules his town with an iron fist. Whitman leads a group of rich libertines who pay lip service to the church while exploiting all around them. Whitman's two sons lead a group of henchmen who sexually ravish any woman they want. Whitman has numerous female witches tortured and killed. A coven lead by Oona (silent film actress Elisabeth Bergner) puts a curse on the Whitman's. Oona calls on Satan to send her a being to kill the Whitmans. Satan obliges.

The Disc
One great movie, one fair movie. Great picture. Good sound on "Morgue," terrible sound on "Banshee." Good extras. A price that can't be beat.

Picture Quality: 8/10
"Cry of the Banshee" (7/10) has uninspired photography with a few exceptions. The interiors in the Whitman's great hall look as if they were filmed on a set. The phoniness of these scenes is in sharp contrast to the exteriors, which evoke the period very well. There are some delineation problems during the nighttime scenes. There were also a few instances of pixilation.

"Murders in the Rue Morgue" (8/10) has an artificial look to it, but it works with the script's multi-layered texture. The colors are rich and well saturated. There is softness around the edges in many places.

Sound Quality: 5/10
"Cry of the Banshee" (3/10) has the worst sound of any DVD in recent memory. I had to constantly change the volume control on my sound system. Sometimes the sound was fine and then it would seem to disappear. I would increase the volume and suddenly the sound levels would rise again causing me to lower the volume again!. I finally just turned on the subtitles and left the volume at one level. Maybe the problem is isolated to my DVD.

"Murders in the Rue Morgue" (7/10) has much better sound. Nice balance between the ranges although the higher tones are flat and tinny. No loss of dialogue.

Menu: 7/10
Simple design based on stills from the two movies. Easy to navigate. No Easter Eggs found.

Extra Features: 8/10
There are two featurettes which include interviews with director Gordon Hessler. I enjoyed them very much as I am a fan of the genre. Both featurettes run about 20 minutes each. They do include spoilers, so watch the movies first. The featurettes include many behind the scenes photos and publicity stills and posters also.

The Final Word:
Horror fans of the 60s and 70s will welcome this DVD into their library. Two movies for the price of less than one! Not bad. You can't go wrong at this price, even if only one of the films is of superior quality.