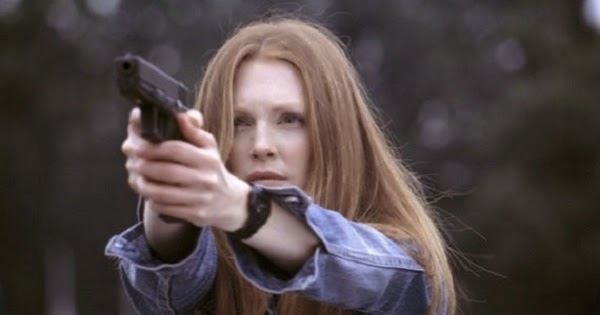 I've got some good news and some bad news, Julianne Moore inhabits the role of Clarice Starling as if she were born to play the part. She seems totally natural in the part. I thought Jody Foster was great in the part, but after seeing "Hannibal," Ms. Foster's acting seems to be just that, acting. The bad news is that the story falls short of the glory of its predecessor. Though full of great performances, "Hannibal" deliberate pace, one or two major unbelievable plot devices and repulsive gore left this viewer sadly unsatisfied.

Julianne Moore is perfect as an older more mature Clarice. Thomas Harris created such a strong, well-defined character in Clarice. Some may say that Ms. Moore plagiarizes Ms. Foster's performance at times, but that would not be telling the truth. Ms. Moore portrays Clarice with the dew off of the Lilly. Clarice has grown and matured. She is one tough cop. She is the second most pleasant surprise in this film. 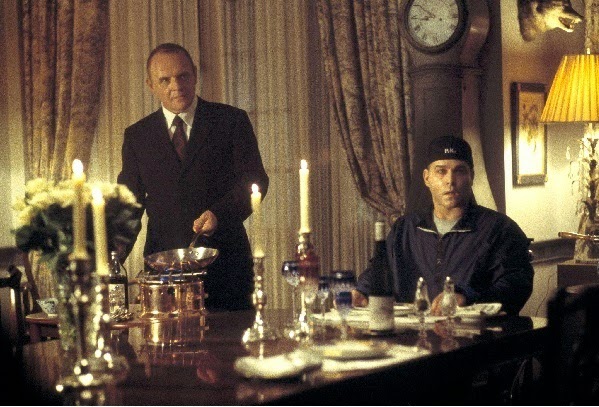 Anthony Hopkins expands Dr. Lector as the good Doctor is walking among his prey. Dr. Lector has settled in Florence Italy where he has procured a job as the curator of the Cappone Library. The Doctor's manners and sophistication allow him to mix into the upper crust of Florence society. While Lector's humor is on display during the mayhem, there are no quotable lines in the script by David Mamet and Steven Zaillian. The intelligence and deviance with which Lector plays his game of cat and mouse with Clarice and the mercenary Italian cop, Rinaldo Pazzi (Giancarlo Giannini) is fun and terrifying to watch. When "Goodfellas" came out, criticism was raised that the film glorified the Mob. I disagreed with that point concerning "Goodfellas," however, I felt that "Hannibal" glorifies serial killers. This was not the case in the previous two films featuring Lector. In both of those films, the killers on the loose and the confined Dr. Lector overwhelmed the audience with a sense of dread. Here, Lector becomes a James Bondesque character. Hopkins is smooth as silk. There is no doubt that he will prevail against those who come to stop him. He comes across as cool. I was conflicted by the fact that I was rooting for him. Unlike Dracula, who is a damned other worldly creature of the night, Lector is a human being who enjoys killing others. I have a big problem that Lector is presented as an anti-hero ala "Cool Hand Luke." 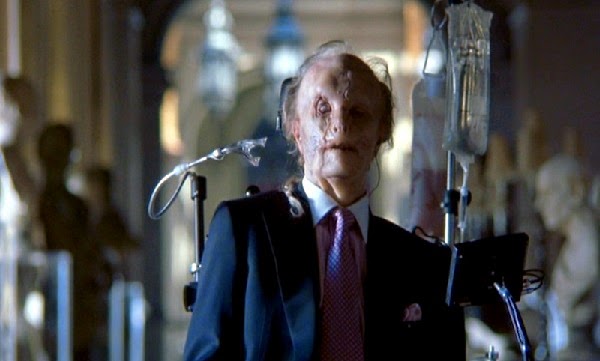 The true horror of this film is the character Mason Verger (Gary Oldman). Verger is the only person who survived an attack by Lector. Confined to a wheelchair, with a scar covered face (it was ripped off and fed to a dog), Verger manipulates the highest levels of the US government to find Lector. Operating from his lavish estate (filmed at the Biltmore outside of Asheville, NC), Verger is a vengeful pedophile who dreams of a slow torturous revenge on Lector. With a strong voice which belies the weakness of his body, Verger offers a 3 million dollar reward for information leading him to Lector. Verger comes across as the character to fear in this film. The magnificent make-up (by Greg Cannom) creates a monster whose black soul is truly reflected in his face. I was disappointed by the writers falling back on the easy stereotype of equating Christians with child molesters. Verger informs Clarice at their first meeting that he became Dr. Lector's patient after he had got in trouble for molesting boys at his father's Christian summer camp. I understood Verger's desire for revenge, and the revenge he plans for Lector is truly original and chilling. What disappointed me, was that in creating such an originally evil character, Lector seems likable by comparison. Don't get me wrong, I've rooted for bad guys in the movies before: "Bonnie and Clyde," "White Heat" and the list goes on, but I felt a bit sick to find myself rooting for Lector. Then again, Verger is a great character, and another wonderful performance by Gary Oldman. I loved hating him! 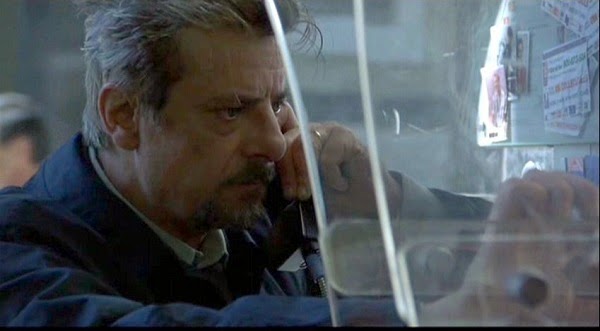 Another treat was seeing Giancarlo Giannini on screen again. He is great as Inspector Pazzi of the Florence police department. He is married to a ravishing younger woman, Allegra (Francesca Neri) with expensive tastes. He discovers Lector while investigating the disappearance Lector's predecessor at the library. His desire to please his trophy wife leads him to seek the reward posted by Verger. The scenes in Florence are the best of the movie. There is a tense under current which keeps you on the edge of your seat. The movie's most chilling scene takes place as Pazzi and Verger's henchmen move in to capture Lector. 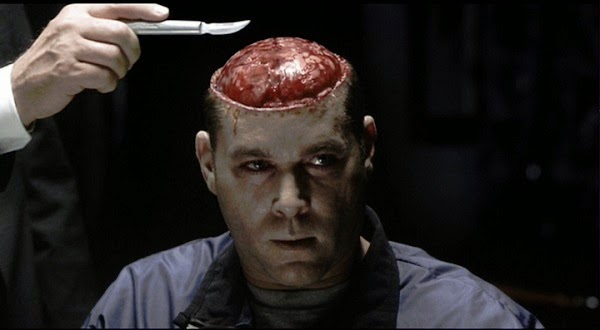 Ray Liotta does another good turn as a slimy creep, Paul Krender of the US Justice Department. His political incorrectness is refreshing in a twisted sort of way. His crude sexual remarks to Clarice are disgusting and not really funny, but in our politically correct society, it's nice to see someone not afraid to speak their mind. Liotta is a flunky who is used by Verger to put Clarice in peril in order to flush out Lector. It is this plot device which rings false.

The film opens with Clarice leading the combined forces of the FBI, DEA and Washington, DC police force on a raid on a crystal-meth lab. The lab is run by a woman. The team surrounds the lab, hidden in a busy fish market. The king pin emerges from her stronghold with her infant on her chest in a child carrier. Clarice calls off the raid. The DEA leader concurs, but a testosterone driven Washington PD officer starts shooting anyway. The resulting carnage is blamed on Clarice, despite the fact that 40 other officers witnessed the fact that someone else was responsible for the carnage. The "Waco" like TV coverage brings Clarice to the attention of both Lector and Verger. Lector uses the opportunity to drop Clarice a disturbing reminder that he is still free, while Verger begins plotting a way to use Clarice as bait for his revenge fantasy. Verger's plotting is far-fetched and nearly sinks the movie.

The real iceberg that sinks this movie is the repulsive violence. I am no prude. I enjoy action movies, slasher films, shoot em ups. It takes a lot to make me turn away, and I turned away several times during "Hannibal." Why is the violence repulsive? I think because of the technical flare with which it is portrayed. When blood gushes from open wounds, the Dolby speakers in the theater are awash with the splattering in surroundsound. The sound of a dog chewing on Verger's face, or another character's intestines splashing out in a wet heap on the ground were far from necessary. These and other scenes border on pornographic for the simple reason that they are performed by a character whom the audience roots for. I didn't read the book, so I don't know if the movie ends the same way. Even though the violence occupies relatively small amount of screen time, it is of such a disturbing nature that it is hard to shake the images. I once made the mistake of watching one of those "Faces of Death" movies with a friend. He said, "Watch this guy blow his brains out!" To my shame I watched it. To my regret I watched it because I cannot shake those images from my mind. That was real, this was Hollywood. I know the difference. This was as close as Hollywood has ever come to leaving me with unwanted nightmares. Those wet sounds still ring in my ears.