This is my 2002 interview with actor David Prowse at DragonCon in Atlanta, GA. 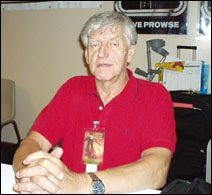 Proof of the magical spell that George Lucas’s original "Star Wars" trilogy still holds on the world is evident at Dragon*Con 2002. Fans stood in line for hours to meet actors whose faces were never shown on the screen. Kenny Baker sat in a high-tech soda-pop can as R2-D2. Peter Mayhew was wrapped head-to-toe in fur as the ultimate "I’ve got your back" buddy, Chewbacca. Three men were used to bring the villainous Darth Vader to life. I’ve always thought that George Lucas used one actor too many. While James Earl Jones’s electronically altered voice was heard, British athlete turned actor David Prowse did the physical stuff.

I had a chance to sit and talk with Mr. Prowse on Day One of Dragon*Con 2002. Mr. Prowse still cuts an imposing figure, even sitting down or walking with the aid of a cane due to an injury. I first noticed Mr. Prowse in Stanley Kubrick’s dark masterpiece, "A Clockwork Orange."

Rusty White: I know most people are here because of "Star Wars," but I’d like to talk about Stanley Kubrick.

David Prowse: He was a wonderful gentleman. I got along fine with him. They were casting "A Clockwork Orange" and I got a call. Stanley liked me right away. I think he was a frustrated sportsman. He seemed to like and respect me right away because of my sports background. There were many days on the set where he would tell me to pull up a chair with him behind the camera and just talk. He never invited any of the other actors to do that.

RW: You were a relatively new actor at that time. Did Mr. Kubrick offer much direction?

DP: Not really. My role was relatively simple.

(NOTE: Mr. Prowse played ‘Julian,’ the bodyguard of Patrick Magee’s character who had been savagely attacked by Alex (Malcolm McDowell) and his Droogs.)

RW: Actress Ann Gillis said that Kubrick went overboard on the number of takes on "2001: A Space Odyssey."

RW: How many times did Malcolm McDowell have to pass out in that plate of spaghetti?

DP: Only a few times. The scene following that, where I carry him (Malcolm McDowell) up and down the stairs was the hardest because Stanley kept doing take after take. After about seven or eight takes, Malcolm got heavy. I told Stanley I wasn’t going to do it anymore, "You have enough." He said OK. After that, while he had other actors do take after take, I only did a couple. I wouldn’t do more and Stanley was fine with it. Like I said, he liked me.

RW: How did the role of Darth Vader come about?

RW: I was upset with the fact that a third actor was used in the ‘death scene’ in "Return of the Jedi."

DP: That was one of the most painful experiences of my life. The way it was done and the way that George Lucas treated me. "Star Wars" has been very good to me, but I suspect they did what they did because of money. Who knew…I don’t think anyone knew it would be 20 years before the next sequel came out. I think they were afraid they would have to pay me more money if they showed my face.

RW: You said that you had a problem with the way the scene was done. Would you explain?

DP: That scene was filmed under tight security in another part of the studio. They had me filming one scene elsewhere, to keep me busy. Meanwhile, the death scene is being shot somewhere else.

RW: So, when Luke (Mark Hamill) is helping carry Darth Vader to his ship, before the mask is removed…

RW: I guess it is some consolation that most fans associate you with the role, while few even remember the third actor'’ name. What was his name?

DP: Sebastian Shaw. He was an elderly man. He died a few years later.

RW: What did George Lucas say when you confronted him about this?

DP: Oh, some mumbo-jumbo about "this isn’t the death of Darth Vader, it’s the ‘revealing’ of Anakin." It was all about the money.

A fan dressed up in full ‘Darth-Vader’ regalia, complete with a sound effects machine asks to have his photo taken with the ‘real’ Darth Vader. I thank Mr. Prowse for his time. He asked me to remind his fans about his new website "Darth Vader: The Official Website of David Prowse." I promise, and take my leave. It’s time for me to search out and interview everyone’s favorite Wookie.