This is my 2002 interview with actor David Naughton at DragonCon in Atlanta GA. 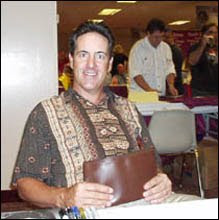 David Naughton told me that people are always telling him where they were or what was going on in their life when they first saw "An American Werewolf in London." As he said that, I realized that I too, knew where I was when I saw the movie. I kept the story to myself because it wasn’t funny or interesting. I must admit that talking to David Naughton ranked #2, next to getting to put my arm around Traci Lords's soft, firm little body at Dragon*Con 2002. "An American Werewolf in London" ranks near the top of my ‘favorite movie’ list. On day three of Dragon*Con 2002, Mr. Naughton found time to sit and talk.

RW: So you’re glad you weren’t in it?

Mr. Naughton makes a face that lets me know I have asked yet another stupid question at Dragon*Con 2002.

RW: It looked cold out on the moors.

DN: It was very cold. We filmed on the West Coast of Wales. It was closer to Twickingham studios than Scotland. About 20 miles outside of London. The scenes on the Moors were the first things we filmed. We actually shot the first part of the film, first. 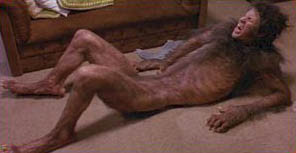 RW: As a serious student of cinema, I must ask: was that real sheep shit or special effects?

DN: (laughs) Everything about those sheep was real. Very smelly. They found a local rancher for that scene. In fact most of the people in the pub were locals. They were very natural, so John (Landis) used them instead of actors.

RW: You and Griffin Dunne played well together. It was real ‘buddy chemistry."

DN: We just connected right away. We hit it off.

We are distracted by a sexy-young woman in a leather Catwoman suit doing battle with a Kato wannabe. Dragon*Con is all about relaxed inhibitions. You never know what is going to happen next. I think to myself "Who knew nerds knew how to party like this?" followed by "And that they attracted so many babes!?!"

DN: Did you go to the ‘Dawn’ costume contest last night?

DN: It was just crazy. The contestants were flashing the crowd. The crowd was flashing them back. Just crazy!

The Catwoman and Kato move their show down the aisle and we get back to business.

RW: Tell me about your training. 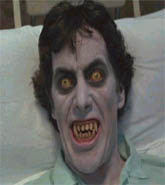 DN: I attended The London Academy of Dramatic Arts. I loved it. We lived and breathed acting. As students we could see any play in London for $5.00. It was a wonderful experience and education. I worked at the Royal

Theater as an usher. That was a big part of my education, seeing such great actors night after night. In fact, I saw Jenny Agutter in "Equus" several times. On the set of "Werewolf" I realized that this was the same woman I had lusted after when I was in school.

RW: That must have been nice!

DN: I was in a three-year program. I left after two years to work, but I can’t say enough about how wonderful an experience it was as a young actor. I mean, we had guest speakers come in to talk about acting. I’m talking about Laurence Olivier, John Gielgud, Ralph Richardson. This isn’t a lecture hall either. I’m sitting in an intimate classroom, as close as I am to you and they are casually talking about their craft. It was amazing.

RW: I asked Robert Picardo if his "Billy the Mangler" from "The Howling" could take you. I don’t think he got it. 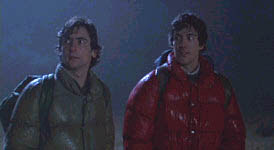 DN: (Laughs) I’d kick his ass! John’s film was the first of the werewolf films at that time. Once he got started, all the other studios green-lighted their own werewolf movies. You had "The Howling," "Wolfen" and some others that weren’t as good as those two. But we were the first and the best.

DN: Yes. John walked a fine line between humor and horror. He pulled it off. He makes you laugh and then laugh harder, and then some one gets ripped apart.

RW: How long did the transformation scene take to shoot?

DN: It was a six-day shoot with six hours a day for make-up and body prosthetics. Rick Baker was amazing. He won his first Oscar for "Werewolf."

RW: I remember reading "Famous Monsters of Filmland" as a kid. Rick Baker was always sending in his makeup creations when he was still a teenager. Then he and John Landis got together at age 18 and…

DN: I remember those days. Rick is a genius. Funny story. Rick couldn’t get a work permit in England to do the movie. John got him in the country as a tourist. Rick and his crew had to smuggle in all of their equipment. They had trunks full of heads and arms. I would have loved to see the faces of the security agents if they had been caught.

RW: It would be worse today.

I told Mr. Naughton about Lou Ferrigno’s experience with racial profiling at the Phoenix airport.

DN: You’re kidding? They didn’t recognize the "Hulk"? They’re lucky he didn’t turn green on them!

RW: I know it was early in your career, but you were the lead in "Werewolf." Did you get residuals?

RW: So, the rule has changed?

DN: Yes, now, no matter what country, if you are a SAG actor, you get a SAG contract.

RW: What do you have coming down the pike?

DN: I did a film in Brazil called "The Flying Virus." It was written and directed by a guy named Jeff Hare. Rutger Hauer, Gabrielle Anwar and Craig Sheffer were in it.

RW: Did you film in the Amazon? My wife spent a week down there and loved it.

DN: No, we filmed in Sao Paulo. It was a city, so I didn’t get my shots. When I got down there, I wished I had.

RW: Michael Caine said that he did several films just because he wanted to travel. Ever done that?

DN: Yeah. I wanted to go to Rome. I got an offer to do an Italian film and I went. Kate Capshaw and I were the only American actors on the film. It was called "Ti Presento Un’Amica." I was told the Italian actors would be speaking English. It turned out, they spoke broken English, and didn’t understand a word they were saying. (imitates) "I’ma gonna breaka you ina halfa!" 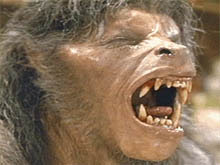 DN: Right! I remember I was shooting a scene with an Italian actress and I had to say the line "There’s a feast tonight, I’ll do the cooking." The actress yelled "Cut!" and went off on a tirade. She was complaining to the director that I was changing the script. She said, "He said "Aldo" is cooking! Who is "Aldo"? I didn’t see an "Aldo" in the script." She thought the words "I’ll do" was a character named "Aldo." It was like that all the way through. I don’t think the movie was ever released in America. Maybe on video. At least I got to see Rome!

RW: Most Italian films are shot without sound and the dialogue is looped in later. What was that like?

DN: Actually, this movie was shoot with synchronous sound, but you could tell that was unusual over there. We would do a scene and the crew would talk right through our shots. It was very disconcerting. The crew had to be reminded that the sound was being recorded and to be quiet.

Traci Lords’ one hour autograph session breaks up. The fans gathered around her disperse to seek new prey. A crowd moves in on Mr. Naughton. Not wanting to stand in the way, I thank my gracious host for his time. Mr. Naughton struck me as a sincere and open human being. I found Mr. Naughton to be free of pretension. I found him to be an all-around nice guy. He could eat "Billy the Mangler" for breakfast any day of the week!