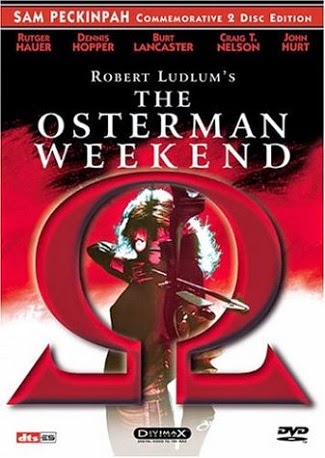 Subtitles:
English for the hearing impared

Based on the best selling novel by Robert Ludlum, "The Osterman Weekend" is a convoluted tale of paranoia, revenge and media manipulation. This was one book of Ludlum's that I could never get into. The film boasts one of the best casts ever assembled. It had a legendary director. What it didn't have was a coherent script. The film is proof enough that you should never begin filming without a finished script. The novel was adapted, and the script went through several rewrites by different parties. Peckinpah himself tried to whip it into shape. What is left is preposterous and at times, downright silly.

John Tanner (Rutger Hauer) is a crusading TV journalist. His specialty is interviewing men of power and decimating them on national TV. Lawrence Fassett (John Hurt) is a CIA field agent whose wife was murdered by the KGB. He uncovers a spy ring called Omega. Three Americans are selling secrets to the Soviets. The three Americans are all college friends of John Tanner. Bernie Osterman (Craig T. Nelson) is a TV writer. Richard Tremayne (Dennis Hopper) is a doctor with a coked out wife named Virginia (Helen Shaver). Joseph Cardone (Chris Sarandon) is a powerful lawyer. His wife Betty (Cassie Yates) doesn't mind the corners he cuts in order to provide the good life. Tanner and his friends have annual get-togethers to play hard. The reunions are called Ostermans in honor of the first host.

Maxwell Danforth (Burt Lancaster) is the head of the CIA. Fassett has convinced Danforth that the CIA should use Tanner to get close to his friends and possibly turn one of them. The politically ambitious Danforth agrees. Tanner is convinced and allows his home to be bugged in order to uncover the spies. Tanner's wife Ali (Meg Foster) is kept out of the loop until it is too late.

Peckinpah's best films featured complex characters. Whether the characters were dealing with violent situations (The Wild Bunch, Straw Dogs) or not (The Ballad of Cable Hogue, Junior Bonner), Peckinpah was able to reveal poignant slices of life. In his violent films, Peckinpah made the viewer reexamine that violence by slowing down the images. In "The Osterman Weekend," Peckinpah is saddled with an inane script. This hamstrung Peckinpah. He tries to create interesting characters. There are two action scenes: a car chase, and the climactic nighttime shootout at Tanner's house. Both remind the viewer of Peckinpah's better days. Unfortunately, neither scene rises to the level of even "The Getaway." There are good performances throughout. John Hurt and Helen Shaver are standouts.

Picture Quality: 7/10
Much of this movie takes place at night. There are some delineation problems and loss of detail during the film's climactic battle. Some shimmering. Otherwise, the picture is good. Well-saturated colors. Good flesh tones on display during the film's abundant nude scenes with Ms. Shaver and Yates.

Sound Quality: 10/10
Excellent DTS and 6.1 tracks. The final shootout makes great use of the surround sound feature on your home theater system

Extra Features: 10/10
Peckinpah was fired by the producers after he refused to make any more cuts following a disappointing test screening. The DVD includes the version test audiences saw. Unfortunately, the transfer seems to have been made from a poor VHS copy. It is presented in full frame format. The VHS tracking problems were left in. The director's preview cut includes subtitles, which explain which scenes were different from the theatrical release. This will be interesting to Peckinpah fans. The director's version has a few things, which flesh out the characters. The producer's big complaint was Peckinpah's distorted opening sequence involving the murder of John Hurt's wife. The theatrical release version contains the same material, but it is presented without the electronic alteration to show Hurt's character's warped point of view. I enjoyed seeing this version. The picture quality is very poor, however, you do get the director's vision. A few years back, Ted Turner restored Peckinpah's "Pat Garret and Billy the Kid" to its original form. The movie was a revelation. It was far superior to the butchered version MGM released to the theaters. This director's cut is still a mess. It's just a different kind of mess.

The commentary track is a treat for Peckinpah fans. There are four Peckinpah historians talking about the movie and the troubled director's career. While there are none of the film's actors on the track, they are present in the great documentary included on the DVD.

"Alpha to Omega: A Retrospective" is a 78-minute documentary about the film's troubled production. The producers and the entire cast except for Dennis Hopper take part. I wish that archived interview footage of Sam had been included. Oh well. What remains is a vivid portrait of a dying man trying to make a comeback. John Hurt tells one of the most interesting stories. He relates that he was worried about Sam's behavior. Burt Lancaster took him aside and asked him if he was worried. Hurt said yes. Lancaster replied "Don't. You are working with a man who has lost it all and is trying to claw his way back to the top."

There is a photo gallery that includes over 50 pictures. The DVD also includes the original theatrical trailer and a 12-page collector's booklet. The booklet includes liner and production notes.

Regular readers know that I always rave about Anchor Bay's biographical information. This DVD is a standout. There are lengthy biographies of Sam, the producers and each of the film's great actors.

The Final Word:
While this is arguably Sam's worst film after "Convoy," Peckinpah fans will want to have this. Is provides an interesting look into the director's final days. Others may want to rent first.
Posted by obitguy at 8:44 PM