This is a column I wrote for EInsiders.com first published Jan. 11, 2005 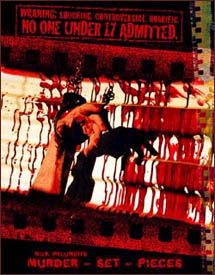 Jonathan Hickman gave me his screener copy of Nick Palumbo’s "Murder Set Pieces." He couldn’t watch the film. In fact Mr. Hickman wasn’t even sure if Einsiders.com wanted to be associated with the movie. Being EI’s horror fanatic in residence, I decided to give the movie a go. "Murder Set Pieces" is the first truly obscene film I have seen in my entire life. I never really knew what real pornography was until I viewed this nightmare. "Murder Set Pieces" is a stroke flick for serial killers. I could imagine some Ted Bundy wannabe sitting around masturbating to this film before going out on the town to kill a few prostitutes. If that sounds harsh, I intend it to. I think "Murder Set Pieces" meets the Supreme Court’s legal definition of obscenity. The movie has no socially redeeming value whatsoever. 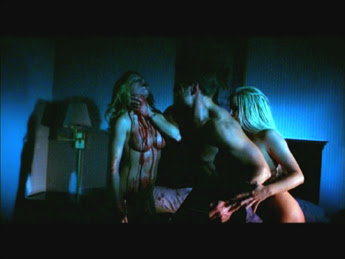 A typical XXX sex film is an hour to an hour and a half long. It includes an average of seven, ten-minute sex scenes, each culminating in a ‘money’ shot (if a male is involved). "Murder Set Pieces" runs about the same time and features a number of five to ten-minutes rape, torture and mutilation scenes except the ‘money’ shot involves arterial spray instead of semen. The movie is aimed to titillate those sick individuals who enjoy seeing women get raped and murdered. Mr. Palumbo assembled an attractive cast of adult actresses like Crissy Moran and Destiny St. Claire, spared no expense on the gory effects, shot on 35mm film and turned out a morally reprehensible film that exploits humanity in the worst possible way. Somehow, Mr. Palumbo enlisted "Texas Chainsaw Massacre" stars Gunnar Hansen and Ed Neal, Tony Todd of "Candyman" fame and "Cabin Fever" actress Cerina Vincent to appear in this pustule of a movie. 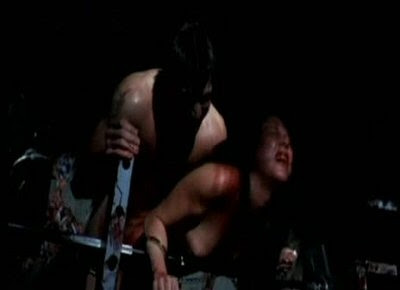 I guess I need to go into detail about what you would see if you went to this film. Palumbo wrote a bare bones plot in order to get right to his murder set pieces. In fact the movie is aptly named. There are a series of scenes in which women are brutalized. I couldn’t help but think about the murdered adult film actress Natal King (AKA Taylor Sumers) as I watched this film. Ms. King was allegedly murdered by a fetish photographer as she posed for some S&M pictures early last year. I wonder if any of her colleagues who appeared in this film gave Ms. King a second thought as they went through the motions to assist Mr. Palumbo in constructing this celluloid insult to women. 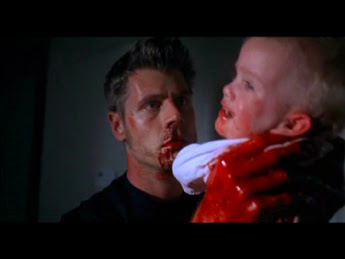 OK. On to what is so reprehensible. In one scene, the killer played by Sven Garret, picks up a sexy stripper. Cut to a motel room where he anally rapes her. Her face is bloody. As he cums, he punches her in the face. Her murder is off screen. This is early in the film, so it is a short scene. Later, Sven is in his basement. He secures a naked blond to a chair by hammering giant nails through her wrists. He then puts a noose around her neck slowly chokes her. He doesn’t kill her right away because then she couldn’t witness him torture the naked woman suspended upside down from his ceiling. They both die slow and bloody deaths. Then there is the woman he cuts up and then gives a facial with a chainsaw. Sven also binds an Oriental looking woman to a weight set and anally rapes her for a seemingly endless period of time. He finishes her off as he cums by impaling her on a spike. She is screaming at the top of her lungs as her thrusts into her for many minutes. Then there is the scene of Sven eating the decaying breasts of a dead woman in his basement. In another scene it appears that Sven is receiving oral gratification from a woman in his car. When he finishes, Sven lifts what turns out to be the severed head of a woman he murdered from his crotch and throws it out the window before he drives off. The camera shows the bloody, disembodied head, with its vacant eyes and violated mouth laying in the gutter. Oh, lets not forget Mr. Palumbo’s most horrific act as a so-called filmmaker. In one scene, Sven murders a woman who has a baby. The child is in his crib. He appears to be between one and two years old. After Sven murders the mother and eats part of her face, he then goes into the baby’s room and menaces him. I wasn’t on the set, but the small infant is screaming in terror. He appears to be afraid. Next, Sven picks up the child and puts him on the floor. The child runs to the actress playing his dead mother and stares at her for a minute. All the while he is screaming in horror. The infant then crawls into the actress’s lap and whimpers. You may say, "heck, Linda Blair did some pretty gross stuff when she was in "The Exorcist!" Well, Linda Blair was 13 years old at the time and knew what she was doing. This infant could not have had any idea what was going on. Shame on Mr. Palumbo and shame on the child’s parents for putting him in that situation. Back to the set pieces. Sven kills a pre-teen child. Sven picks up two blond hookers and kills them in a menage-e-death. 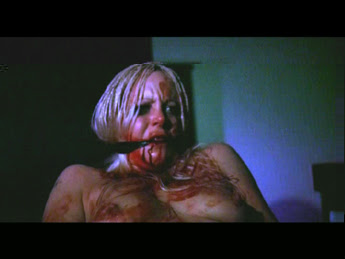 You get the idea. The reality is much worse than the description. This is a film designed to go over the top. It goes way over the top and I imagine well beyond many local community standards. If a film could be prosecuted for obscenity these days, this would be it. There have been several brutal films released in the last few years that have examined similar subjects in an unflinching manner. The French film "Baise Moi" comes to mind. The two stars were French adult actresses. The film’s author and director was a former prostitute. The movie includes a rape scene and several sex scenes that show penetration. However "Baise Moi" is an unflinching look at the consequences of exploitation. The two women who go on a murderous rampage have been used and brutalized to the point they have become unfeeling animals. The death and brutality is show in a matter-of-fact, albeit realistic way. That film challenges the viewer. "Irreversible" is another film of such quality. From the brutal beating death in an S&M gay bar to the horrific 11-minute rape scene of star Monica Bellucci, "Irreversible" examines the subject of violence and revenge. Those films as well as Nick Palumbo’s exploitation movie exceed the boundaries of the MPAA’s R Rating. Only Palumbo’s film exceeds the boundaries of human dignity. Had Palumbo tried to shed some new light on the world of serial killers ALA "Henry: Portrait of a Serial Killer" he may have some excuse for this action. As it stands, "Murder Set Pieces" is designed to appeal to the prurient interests of the most dangerous sections of society. 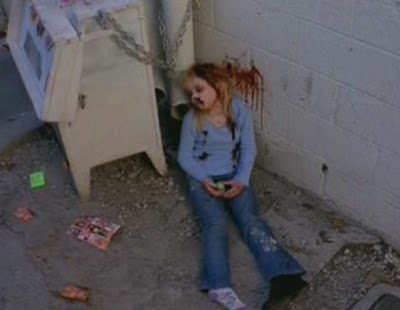 In addition to the unrelenting violence against the women in this movie, "Murder Set Pieces" also glorifies the serial killer. Like many films dealing with the subject, the killer is portrayed as a sexy, rich and powerful person. He is Nietzsche’s Superman with a straight razor. Sven has a nice expensive house. He is a fashion photographer. The truth is that with the notable exception of Ted Bundy, most serial killers are ugly, out-of-shape losers with low paying jobs and no social skills. They are a pathetic lot who should be wiped from the face of the earth. Sure, we all like to be thrilled by the debonair Hannibal Lector, but this movie isn’t "The Silence of the Lambs." A more apt title might be "The Screams of the Exploited." I remember Melanie Griffith’s porn star character Holly Body in Brian DePalma’s "Body Double." In one scene her character gives a pseudo porn-producer played by Craig Wassen a list of things she won’t do on film. I guess that is just Hollywood romanticism. Apparently the women who appeared in this film have no compunction about what they will do on film. By taking part in the slaughterhouse events in "Murder Set Pieces" these ‘actresses’ have betrayed their gender. Sure, women are empowered to use their sexuality anyway they want to, but do these women really think it is smart to use it to fuel the fantasies of men who would like to destroy them slowly and brutally? To call "Murder Set Pieces" a horror film is an insult to horror films. "Murder Set Pieces" is the new pornography.