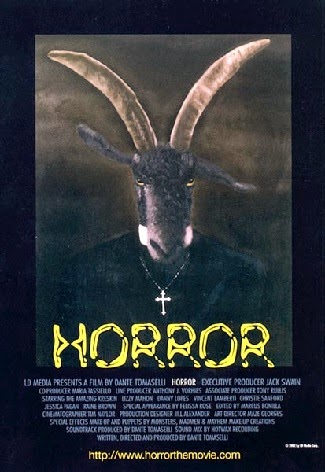 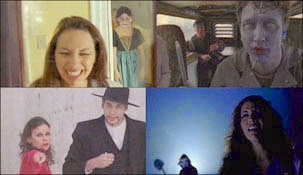 Review
One of the greatest pleasures I've had during my years with Einsiders.com has been getting to know the work of Dante Tomaselli. Regular readers of EI know that I am a hardcore horror movie fan. Unfortunately, much off the drivel that is passed of as horror these days is unimaginative, ludicrous and just not scary. From the moment I first saw the trailer for Tomaselli's "Horror," I just had to see the movie. Mr. Tomaselli sent me a copy last year to help me prep for an interview with him. I was totally blown away by Tomaselli's surreal masterpiece. Yes, Masterpiece! Tomaselli's debut film "Desecration" was a flawed but very imaginative and creepy film. "Horror" is an unofficial sequel. "Horror" surpassed not only his earlier film, but many genre films by more seasoned directors.

I received more e-mail concerning my review of Tomaselli's "Horror" than for anything else I've written (that even includes my infamous "Kiss of the Dragon" review!). The main question readers wanted the answer to was "When can I see this movie? Where is it showing?" I'm happy to report that the heavily loaded DVD release of "Horror" is set for May 27!

Picture Quality: 6/10
Director Tomaselli told me that Elite Entertainment had made an anamorphic transfer of "Horror" but the result was too grainy. He decided to have them redo the transfer in letterbox. There is only one real problem with the picture. During the lighter scenes, the picture is very soft at the top and bottom of the screen. The effect isn't noticeable during the darker scenes. There is a bit of grain, but that seems to be deliberate. "Horror" seems inspired partially by such gritty films of the 70s as "The Texas Chainsaw Massacre."

Other than that, the picture is quite good. The colors are vivid and well saturated. There are no delineation problems which is a blessing as much of the movie takes place at night. The nighttime scenes have a surreal bluish tint at times, which was deliberate. The zombie attack, the scene in which Kreskin sits in his darkened room with his granddaughter and the mysterious attic scene are all visual stunners.

Sound Quality: 10/10
The 5.1 remastered soundtrack rocks! Raz Meziani did the adrenalpower-driven music for the opening credits. I told Dante that I thought it sounded like Bernard Herrmann on speed. Wonderful, frantic piece of work. Tomaselli scored the rest of the film himself. Great balance between the ranges. The soundtrack makes excellent use of the 5.1 surround sound feature. No loss of dialogue, even though the dialogue is secondary to Tomaselli's surreal visuals.

Menu: 8/10
The menu features that scary ass goat! Very creepy. Easy to navigate. No Easter Eggs found during the review.

Extra Features: 9/10
When Dante Tomaselli told me that he had struck a deal with Elite Entertainment to release the DVD, I asked him if he was planning on doing a commentary track. As a student of film, I wanted to hear what this guy had to say about his work and horror films in general. Tomaselli's commentary track will be of interest to both fans of horror films and up and coming filmmakers in general. "Horror" looks like a $1,000,000.00 movie. Not bad work for a budget around $300,000. Even though he didn't use my name, I was very moved that Mr. Tomaselli mentioned my Bernard Herrmann comment during his commentary track over the opening credits music. (I would rave about this movie and DVD even if he hadn't!) 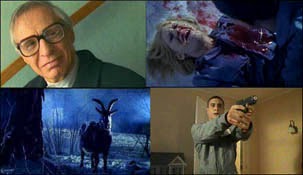 One thing that amazed me (and it shouldn't have) was the large number of crew and equipment shown during the "Behind the Scenes Footage" and in the "Still Gallery." I shouldn't have been surprised because of the professional quality on the screen in "Horror."

One of the biggest surprises in "Horror" was the purely evil performance by famed Mesmerist The Amazing Kreskin. Kreskin has spent years debunking the existence of hypnosis. Kreskin claims (in my truncated words) that the so-called results of hypnosis come from powerful suggestions. I'm no shrink, so I can't say one way or the other. What is interesting is the featurette in which Kreskin is shown making his suggestions with the various cast members and extras. The featurette includes a number of interviews with Kreskin's subjects explaining what it was like to fall under the power of his suggestions. Once you watch the film, this featurette will mean more to you.

The Final Word:
This is a must have DVD. I am very happy that Mr. Tomaselli's film has been given such a nice showcase. I have selfish reasons. I want to see more movies by this guy! I've read a partial treatment of his next film "Satan's Playground" with Ellen Sandweiss (The Evil Dead), Felissa Rose (Sleepaway Camp and Horror) along with several Tomaselli regulars. Tomaselli said that his next film will be a more straightforward horror film, rather than the surreal experiences film in "Desecration" and "Horror." I can't wait. I envy you that fact you will finally get to experience "Horror" on May 27.