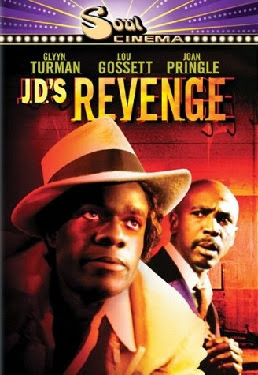 Review
Arthur Marks's 1976 Blaxploitation horror movie "JD's Revenge" is a fairly well-done story of revenge from beyond the grave. The MGM DVD has been released as part of their "Soul Classics" series. Glynn Turman (How Stella Got Her Groove Back) stars as Ike Hendrix, a young man working his way through Law School by driving a cab in New Orleans.

In a prologue set in 1942, JD Walker (David McKnight) comes upon Theotis (Fred Pinkard) arguing with JD's sister, Betty Jo (Alice Jubert). Theotis kills Betty Jo when she threatens to tell Theotis' brother Bliss, (Lou Gossett Jr.) that the baby she had belongs to Theotis and not Bliss. JD rushes to Betty Jo's fallen body after Theotis runs away. Bliss comes up right after him. Seeing JD with his sister's blood on his hands, Bliss yells "murderer!" JD is shot and dies. AD and his sister are interred in side-by-side crypts.

Flash forward 30 years. Ike is living with Christella (Joan Pringle), a beautiful divorcee. They help their friends Tony (Carl Crudup) and Phyllis (Stephanie Faulkner) celebrate an anniversary with a night out on the French Quarter. Ike takes part in a cabaret hypnotist's act. During his trance, JD's spirit enters Ike's body. Ike finds that he suffers from recurrent headaches and nightmares in which he witnesses JD's death. His relationship with Christella suffers as JD takes over his body as they have sex. Christella is scarred by Ike's sudden change. Ike becomes abusive to the point that he beats and rapes Christella. JD's possession of Ike takes on external forms as Ike changes his hairstyle from the 70s era afro to a 40s era perm. He also takes to dressing in 40s retro gangster clothing and talking in JD's gangster slang. Christella’s ex-husband, a cop goes after Ike. Ike meanwhile has discovered the location of Bliss and Theotis. Bliss is now a fire and brimstone preacher who wows his congregation with his frantic delivery. Ike meets Bliss’s daughter, Roberta (Alice Jubert in a dual role), and sets his incestuous sites on her. Ike has now become fully possessed by JD and there will be hell to pay. I'll go no further for those of you who haven't seen the movie. Trivia note, look fast for USA Network’s buxom "Up All Night" girl Rhonda Shear as a little girl.

I never really liked the term "Blaxploitation." It seemed as if Hollywood and the media were dragging their feet on the civil rights issue by calling the flood of movies released in the early and mid-70s aimed at Black audiences. While there were films released of the era which would qualify as exploitation films, they were in the minority. I think the term coined reflected the reluctance of mainstream Hollywood to accept the changes wrought by Dr. King and others. The term "Blaxploitation" was a stigma. It was almost like the media and Hollywood were saying that these aren’t real movies because Blacks are not real Americans. It backfired on Hollywood as many excellent actors and directors of color came to the forefront during this time. Many of these so-called inferior exploitation movies were actually solid pieces of film making and storytelling. I was happy that MGM labeled their recently released series of these films as "Soul Classics." Enough editorializing.

I wish I could say the acting by Mr. Turman in "JD's Revenge" was above average, because the story is pretty good for this type of horror film. Unfortunately, Mr. Turman's performance has a little to much "Stephen Fetchet/yassa" in it. It doesn't sink the movie, but it could have. The movie succeeds due to the script, direction and the other actors. I never once believed that Mr. Turman was a law student. I didn't see how he could have had such a cool girl friend. With a better performance or a different actor in the lead role, "JD's Revenge" could have been an above average horror movie instead of just a good one. Lou Gossett is good as Bliss, the object of JD's wrath.

Other than Turman's weak performance as Ike, my only other object to the film is the script's condoning domestic violence. After Ike beats up Christella, his friend Tony tries to comfort the confused Ike by telling him that what he did was a good thing. "A woman want's you to show her where the lines are. They like this kind of stuff." This attitude is reinforced by Christella's reaction, when she continues to love Ike even after he brutalizes her during sex, and later beats her and even later beats and rapes her. I guess it was supposed to be OK because Ike was possessed at the time. The bottom line is that Christella didn't know Ike was possessed. Oh well, it's only a movie.

The Disc
The movie is not bad. The transfer is good, picture-wise. The sound is OK. No extras to speak of. For fans of the 70s the DVD will mean more.

Picture Quality: 8/10
The trailer was not restored. If you compare the trailer with the movie itself you will see a world of difference. The picture is very good. The film was lit in a harsh manner popular at the time, so there are no shadows to worry about. I didn't notice any artifacts.

Sound Quality: 6/10
The mono sound is just what you would expect, monotonous. The movie doesn't rely on sound effects or special effects very much, so it's not like you are really missing anything by having a mono soundtrack. There really isn't even a good score ALA "Shaft" or "Superfly" to be hurt by the mono sound.

Menu: 7/10
Easy to navigate, gets the job done. Appropriate for the DVD.

Extra Features: 2/10
No extras except a trailer which is only good for comparison purposes. (See picture quality above).

The Final Word:
I never thought I would use the term 'vanilla DVD' to describe a "Soul Classics" release, but this DVD is as vanilla as they come. However, MGM's price reflects this.