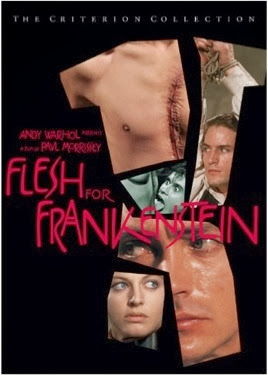 In 1974 pop artist Andy Warhol produced a pair of horror films directed by long time collaborator Paul Morrissey. The first to be released was called "Flesh for Frankenstein" in Europe. At home the pop-camp 3-D gore-feast was known as "Andy Warhol's Frankenstein." What can you say about a film which includes a scene of Dr. Frankenstein (Udo Keir) fondling the gall-bladder of a eviscerated corpse while he has sex with it? In that scene, Frankenstein looks at his assistant Otto (the late Arno Juerging) and says "What are you looking at? Turn around you sick thing!" Originally Rated X, "Flesh for Frankenstein" was trimmed by 1 minute to an R rating. Criterion has restored the lost minute in this DVD edition.

Dr. Frankenstein is a pompous aristocrat who want to create the perfect couple who embody all of the nobility of the Serbian race. After creating the perfect couple, they will mate and produce a race of perfect people who only worship the good doctor. The doctor's wife is also his sister, Katrin (Monique van Vooren). Katrin spend her days tending to her two children and lusting after the muscular peasants who work their lands. One man, Nicholas (Joe Dallessandro) captures the Baroness's fancy. She keeps catching him screwing the local girls. She calls him to the castle to discipline him.

The good doctor has created the perfect woman zombie (Dalia De Lazzaro). He has the body of the male zombie. All he needs is the head of a male which has the perfect Serbian "nasum" and an unquenchable sex drive. Doc and Otto hide outside a local brothel and wait for a Serbian stud to exit. Nicholas has a friend (Srdjan Zelenovic) who wants to become a monk. Nicholas takes him to a brothel to try and talk him out of his decision. Nicholas has his way with the three women, while his friend shows no interest in sex. You can guess which one ends up losing his head.

Nicholas meanwhile is given a job in the household rather than the fields. He is still doing quite a bit of plowing though. What will happen when Nicholas recognizes his friend's head on the doctor's male zombie? Who cares?

You are either going to hate this movie or love it. To me, it was like driving by a traffic accident. I couldn't look away, but I wished I could. The script is horrible. It includes such profound lines as "You can't truly appreciate death, Otto until you fuck life in the gall-bladder. The acting is so over the top that you will have trouble keeping your jaw from dropping. Joe Dallessandro was the star of many of Andy Warhol/Paul Morrissey films. The Brooklyn street hustler seems out of place among all of the European actors, but what the hell. This is camp. Monique van Vooren is probably the sexiest woman you will ever see without eyebrows! Dalia De Lazzaro does qualify for feminine perfection. She's not much of an actress though.

The two people who keep your focus are Udo Keir and Arno Juerging. The two re-team with better results in "Blood for Dracula." Whether they are carrying on "serious" scientific experiments or stalking victims to harvest their body parts, they are a hoot. It is a shame they weren't part of a Saturday Night Live cast. Udo Keir explains on the commentary track that Arno Juerging's mother barged into Andy Warhol's office and forced him to hire her son for his movies. Later when Juerging's mother died, Arno jumped out a window to his death. 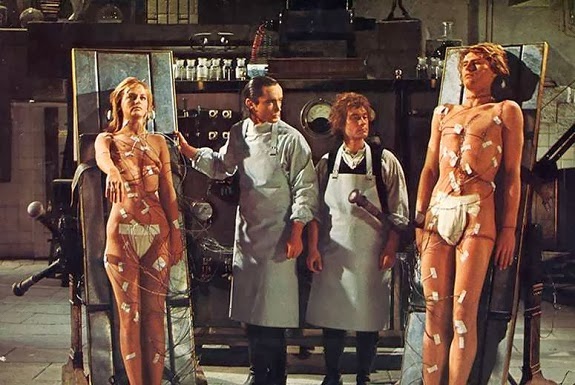 Picture Quality: 4/10
Grainy and gritty throughout. Very poor transfer. Huge loss of clarity between dark and light colors. At times you can only see things that are directly lit. Artifacts galore. The scenes in the well-lit lab are fine.

Sound Quality: 3/10
Flat mono sound. You can hear the dialogue, but the sound is sounds as if it was recorded with tin cans and a string.

Extra Features: 6/10
The menu makes nice use of music and images from the film. Easy to navigate. No pictures on the chapter selections though.

I got a kick out of the commentary track. Paul Morrissey and Udo Keir talked about the movie production and behind the scenes gossip. Film Historian gives his intellectual interpretation of what Morrissey was trying to say and do in the film. His ramblings come off as pompous as the lines spoken by the Dr. Frankenstein character.

The photo gallery is set to music and lasts almost 20 minutes.

The Final Word:
I saw "Andy Warhol's Dracula" when it first came out and liked it. I rented "Andy Warhol's Frankenstein" because I wanted to see how it compared. It is a mess. I'm glad I finally saw it. I wouldn't rent it again, and I certainly wouldn't buy it at the price Criterion is charging.
Posted by obitguy at 8:10 PM