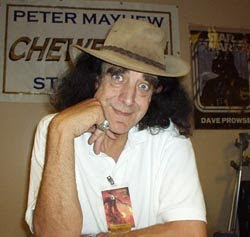 Peter Mayhew is luckiest man in the world. He’ll tell you so himself. He was the right size, in the right place at the right time. You can’t help but notice Peter Mayhew. ‘Abbie Hoffman’ came to mind when I saw him sitting at the autograph table at Dragon*Con 2002. ‘Abbie Hoffman playing for the NBA’ is what I thought when I passed him walking through the hotel lobby. David Prowse didn’t seem so big anymore. The wild hair Mr. Mayhew sported made me wonder if he had to wear a costume to play Chewbacca.

I sat with Mr. Mayhew on day one of the Dragon*Con convention. What follows is based on my memory two weeks later. I think I lost the tape of our conversation when I dropped my backpack on Kenny Baker’s wife.

Rusty White: I’ve always thought you would be a good guy to have at my back in a bar fight!

Peter Mayhew (Laughs) Thanks. I think.

RW: How did you get the part of Chewbacca?

RW: Simple as that?

PM: Pretty much. I was the right size.

RW: Sometimes you hear actors complain that a part stereotypes them to their detriment. Has Chewbacca been a problem for you, professionally?

PM: Are you kidding? This has been the best thing that ever happened to me. In the last 25 years, I’ve been able to travel all over the world, get paid for it. I never have to pay for a thing. I can go out in public without being recognized. If I want to be recognized in public, it will happen. "Star Wars" was great to me. I’m set for life. I just got back from Australia. They had a "Star Wars" convention down there.

RW: Do you do a lot of these fan conventions?

PM: Quite a few. This one’s the best.

Mr. Mayhew nodded his head. I looked in the direction he was pointing. A buxom blonde in a Victoria’s Secret get up is posing for pictures.

PM: This convention is the best one in the world. You just wait. You’ll see. This place gets wild.

I’m amazed how much Dragon*Con has in common with certain alternative lifestyles conventions you hear about. The blonde moves on down the line.

Being a somewhat overweight writer, rather than a celebrity, I don’t think I will be having the same type of fan interaction as Mr. Mayhew.

RW: What do you see as the appeal of Chewy’s character? Life wouldn’t be quite so good if you had been saddled with a character like Jar Jar Binks or those pesky Ewoks.

PM: Chewy is just a great big teddy bear. He is loyal to his friends and he will rip apart anyone who threatens his friends.

RW: I was hoping for a scene in which Chewy looks around to see if anyone is looking and then squashed a few Ewoks for fun.

PM: (Laughs) Yes, I can see that. George Lucas puts those types of characters in for the kids. Same with Jar Jar. Annoying bastard, wasn’t he?

RW: Jerome Blake said that several of his costumes in Episodes 1 and 2 were equipped with an internal cooling system similar to an astronaut’s pressure suit. Did you have anything like that in Chewy?

PM: No, it was bloody hot most of the time. Of course, when we filmed "Empire" in Norway, I was the only one who stayed warm. I could have made a fortune renting out that costume.

I pointed to one of the photos of Chewbacca that line his table.

RW: Was that your own hair?

I pulled a book from my backpack to have Mr. Mayhew autograph. He studies the picture intently.

PM: That is a rare photograph. There’s George, his DP…these were the guys that George started making movies with. All of these guys were the core group. I’m the only cast member.

Mr. Mayhew seems to drift back in time to a place long ago and far, far away. He signed my book. A couple of the convention’s most nubile fans approached. Mr. Mayhew returned to the present.

I nodded to Mr. Mayhew to say thanks. He smiled and turned back to the two young women. I left, a bit envious, to let Chewbacca cash in on his animal magnetism.