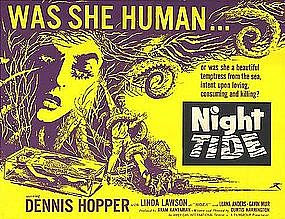 Curtis Harrington's feature film debut is a lyrical fantasy film which bears many of the hallmarks of his later work. The first film in which Dennis Hopper had the lead role, "Night Tide" is the simple story of a sailor and the girl he loves. The only problem is, the girl, Mora (Linda Lawson) may be a homicidal Mermaid with two corpses to her credit already. Filmed on a low budget for American International Pictures (and a lot of help from Roger Corman), "Night Tide" still holds interest today due to its imaginative storyline and dialogue. 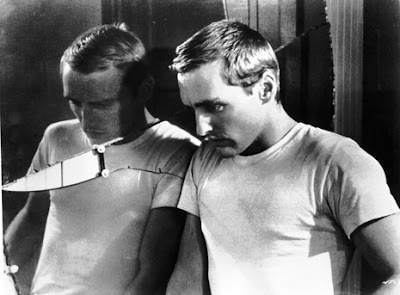 Johnny (Dennis Hopper) is a sailor from Denver. He walks around the beaches of Santa Barbara and Venice looking for some action. He stumbles into a beatnik bar called the Blue Grotto where a hot jazz combo burns up the night. He sits down, when suddenly he notices a raven haired beauty across the room. Johnny asks top sit with her. The girl, Mora says OK but then rebuffs his attention. After a while a mysterious woman (Carmen) enters the bar, approaches the girl and speaks to her in a foreign tongue. Mora leaves the bar in a hurry. Johnny leaves hot on her heels. He stops her on the street. After a nice scene in which he convinces her that he isn't some guy just interested in a one night stand, she allows him to walk her home. Home is an apartment situated over a carousel on the beach. Mora tells Johnny that she works on the pier in a sideshow attraction. She is a mermaid. Johnny kisses her and asks to come see her the next day. 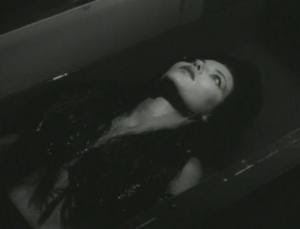 Johnny shows up the next morning. The owner of the carousel (Tom Dillon) seems worried that Johnny is trying to see Mora but he shows him up anyway. Mora is just sitting down to breakfast: sea food. Mora asks Johnny if he has ever eaten sea urchins before. Johnny thinks the choice of breakfast food is a bit strange, but he is falling for Mora so he overlooks this quirk. Johnny escorts Mora to work where Johnny meets Mora's father, Captain Murdock (Gavin Muir). While Mora goes inside to change, Johnny and Murdock talk. Murdock tells Johnny that he found Mora abandoned on an island in the Mediterranean sea when she was a little girl and that he adopted her. He also tries to dissuade Johnny from becoming involved with Mora. Later in the film, Murdock tells Johnny that Mora is from an ancient race of sea people. He warns Johnny that he is placing his life in danger if he continues to see Mora. 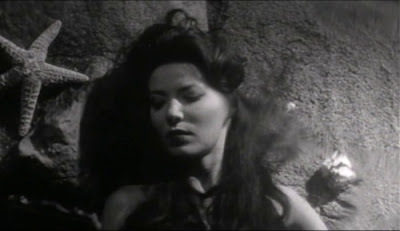 The acting is quite good. Dennis Hopper delivers a very controlled performance. Absent is the awkwardness of his portrayal of Jody in "Giant" just five years before. His Johnny is a normal guy in his early 20s. Mr. Hopper seems very much at ease. He is caught up in a very strange situation, but he is nobody's puppet. As well Linda Lawson, Gavin Muir and a young Luana Anders are also quite good. Dennis Hopper and Luana Anders share a great scene together as Johnny talks over his feeling for Mora with Ms. Anders character, the daughter of the carousel owner. This scene foreshadows their great scenes together years later in "Easy Rider." The entire cast benefits immensely from the fact that they have such good dialogue to speak. When I interviewed the director, Curtis Harrington I told him I thought it was intelligent and sophisticated without sounding pretentious. More fantasy than horror, Harrington's still shows that he is adept at creating suspense and delivering tense scenes in this, his debut film.