Horrors of the Black Museum 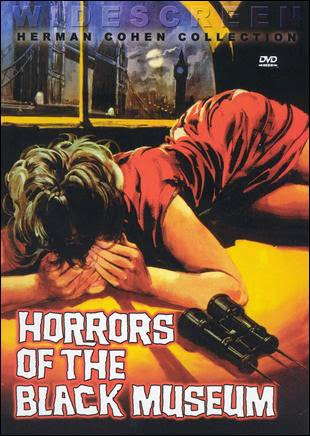 Herman Cohen's "Horrors of the Black Museum" begins with one of the more infamous scenes of the 1950s. A young blonde woman receives a pair of binoculars in the mail. As she raises the gift to her eyes, 5-inch spikes shoot out of the lens aperture and into her brain. Even though you don't actually see the penetration, the scene is very effective. I first saw this movie in the early 1960s. It became a childhood favorite. I did my best to never miss it whenever WHBQ would show it on "Fantastic Features" with your host Savid.

I have been looking forward to VCI's release of "Horrors of the Black Museum" for quite some time now. I wanted to find out if this beloved movie from my childhood still held up. It does and it doesn't. I found that the movie no longer scared me, but I also found that it did make me laugh and smile. "Horrors of the Black Museum" is a ham and cheese classic. The great thing about this VCI DVD is that you learn a little about the gimmicks of B-movie promotion through the extensive extras provided. Let's talk plot before we get to the extras.

George Bancroft (Michael Gough) is a British crime writer. The arrogant scribe loves to point out the shortcomings of Scotland Yard. The above mentioned binocular murder is just the latest in a series of grisly murders plaguing London. Each time someone is killed, Bancroft hobbles into the office of Superintendent Graham (Geoffrey Keen: the minister of defense in the James Bond films) to gloat. Bancroft also has a habit of checking in with his doctor after each murder. I am not giving anything away when I reveal that Bancroft is more than a little involved in the killings. This is revealed in the previews.

Bancroft has a museum of death in his basement. The room is filled with dioramas of famous murders as well as an arsenal of various torture devices. Bancroft has a faithful aide, Rick (Graham Curnow) who assists with Bancroft's writing and other activities. Rick is dating a redheaded hottie (Shirley Anne Field) who wishes he would spend more time with her and less time playing Igor with Mr. Bancroft.

That is all plot you really need to know. "Horrors of the Black Museum" contains several implausible but entertaining murders. None are as inventive as the binocular scene, but the movie keeps you attention. I watched this movie with one of my son's friends. My son couldn't tear himself away from his video games. We found ourselves cracking wise throughout the movie ALA "Mystery Science Theater 3000." Like many of Herman Cohen's B-movies, "Horrors of the Black Museum" is cheesy fun. Michael Gough delivers one of the most over the top performances you are likely to see. That is saying something considering the nature of the genre.
The Disc
Full movie. OK picture and sound. Great extras.

Picture Quality: 6/10
I don't know what is wrong with the picture. The transfer was made from a European remastered version. This movie was shot in Cinemascope. When I played the DVD on TV, a large portion of the picture was missing on both sides. I knew that VCI had delayed the original release of this DVD, so I wondered if the company, which did the transfer, had screwed up. I intended to do a screen capture of the opening credits to give you some idea of how much picture was missing. Funny thing is, when I put the DVD in my computer to do the video capture, the entire frame was present. So, I can watch the entire movie on my computer, but on TV a third of the picture is missing from the sides. Go figure.

The colors are very vivid. The blood is Technicolor red, very much like a harlot's nail polish. The flesh tones are good. The picture is soft around the edges. There are some delineation problems during the final "fun fair" sequence.

Sound Quality: 7/10
The mono track is a bit flat at times. This could be due to the flat acting by British sex symbol June Cunningham as Bancroft's blonde floozy. There is no loss of dialogue.

Extra Features: 10/10
As they did with "City of the Dead" and "The Mark," VCI has gone the extra mile to put together a great package of extras. These three DVDs show VCI's dedication to improving their place among the purveyors of vintage movies.

I have a soft spot in my heart for the films of Herman Cohen. I grew up watching his work. This DVD includes a number of extras focusing on Mr. Cohen. The commentary track was created from archived material in which Mr. Cohen discussed the film. It is a lot of fun. Also included is a video tribute to Mr. Cohen narrated by his close friend Didier Chatelain. It is informative and contains a great many pictures and clips. Also included is a 15-minute phone interview with Mr. Cohen by Scarlet Street publisher Richard Valley. The phone interview is hard to hear at times, but still worth listening to. The interview is accompanied by a video montage of the movies being discussed.

B-movies of the 1950s were often promoted by such gimmicks as life insurance policies in case you died of fright, or nurses in the lobby to assist those who ran screaming from the theater. Such devices were often more inventive than the movies themselves. "Horrors of the Black Museum" was also promoted with the gimmick of "Hypno-Vista." The DVD includes the 13-minute "Hypno-Vista" opening. What this is, is a boring lecture on hypnosis by British psychologist Emile Franchel. Dr. Franchel's film clip supposedly was designed to hypnotize the audience in order to enhance the movie.

The US and European trailers also show how horror films of the era resorted to gimmicky promotion. The US version features Dr. Franchel sticking needles through a young woman's arm while she smiles, oblivious to the pain. I liked the British approach to the trailer better. Dr. Franchel is nowhere in sight. Instead, the British trailer make use of the films "X Certificate" rating. When ever a gory scene (by 1959 standards) is about to be shown, the censor blocks the screen and tells the audience the only way they can see the shocking and unspeakable events of this "X Certificate" movie, they will have to go to the theater.

The second commentary track by David Del Valle and Gerard Schurmann also includes a number of insights into Mr. Cohen and his work. The DVD also includes a good photo gallery and biographies of the main cast members. There is a booklet insert, which unfolds into a reproducing of a Spanish movie poster. The poster is sexploitive in a fun sort of way. Ironically, it is made up of artwork of scenes that are nowhere to found in the movie. Such is the nature of B-Movies!

The sneaks include other VCI horror film releases like Dario Argento's "The Bird with the Crystal Plumage," Mario Bava's "The Whip and the Body" and "Blood and Black Lace,"Curtis Harrington's "Ruby" and John Moxley's "City of the Dead." each of these DVDs include great transfers and extras.

The Final Word:
Another great attempt by VCI to give the royal treatment to an older, well-loved cult classic. Please support these efforts by VCI so they will continue to release such titles in the future. Anchor Bay needs the competition.