An Interview With Wright King 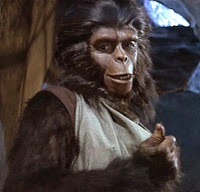 Of all the actors present at the Memphis Film Festival, Wright King was the one I wish I had more time to talk with. Mr. King has appeared in a number of films ranging from "A Streetcar Named Desire" to "King Rat" and "Planet of the Apes." He also appeared in the cult classic "Invasion of the Bee Girls" which had something to do with young women killing men through exhaustive sex. I don't think Anna Nicole Smith starred in it. What struck me about Mr. King was the passion with which he talked about his craft. He told me some great stories about the days of live television. How one had to be in top condition to carry off their performance.

I had a whole list of questions prepared for Mr. king but to tell the truth, I got so caught up in his stories that I forgot to ask most of them. I also was so caught up in Mr. king's stories that I didn't take notes as we talked. He is a fascinating gentleman. His speech at the closing banquet showed him to be a man who takes his craft seriously. Acting is a craft that Mr. King has honed over the years on stage, television and film. Here are a few of the questions and answers that Mr. King shared with me.

Rusty White: You worked with Steve McQueen when his career was really starting to take off. How was he to work with on "Wanted: Dead or Alive?"

Wright King: His life was becoming very busy. I remember one episode in which we had a very dramatic scene. I went up to Steve and asked him if we could take some extra time to practice the scene. We filmed it and it turned out great. Steve then got a film role and was going to leave the show. Steve came up to me and said that the producers wanted me to replace him in the series. They were so impressed by the scene we had done extra rehearsal on that they gave me the job. 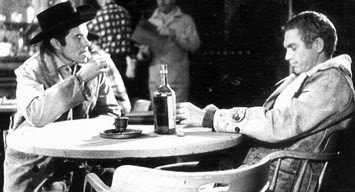 RW: You appeared in the made for TV movie "The Missiles of October" about the Cuban Missile crisis which was a break through film for William Devane. How do you think it holds up against the Kevin Kostner film "13 Days?"

I haven't seen "13 Days" but I was very happy with "The Missiles of October."

RW: What are your memories of "Finnian's Rainbow"?

There was the great Broadway musical and it was going to be turned into a movie with Fred Astaire. Directed by Francis Ford Coppola. Well, it really didn't turn out like any one would have hoped. Coppola came into his own later. 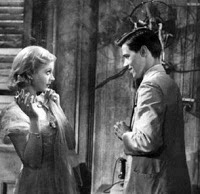 As I said before, Mr. King's fondest memories were from his days in live television. Check out Mr. King's filmography on the IMDB. You will see a quite lengthy list of credits from this era. Woody Wise's Hollywood's Attic carries many of these titles for those interested. As far as Mr. King's big screen work is concerned, "Planet of the Apes" and "A Streetcar Named Desire" are certifiable classics. In "Planet of the Apes" Mr. King had the distinction of being the only actor who's arms were made up. This added several hours to the make-up process. I highly recommend the WWII POW drama "King Rat" with George Segal and an all star British cast as a movie not to be missed. I hope one day to make contact with Mr. King for a fitting interview.
Posted by obitguy at 7:35 AM