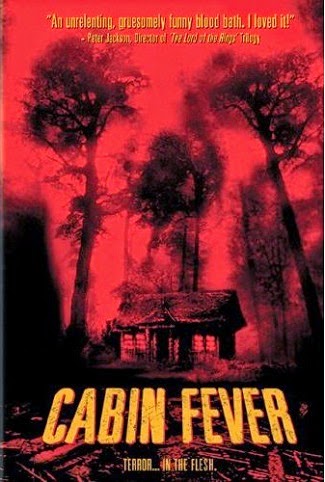 Review
Director Eli Roth makes an assured debut with the scary, funny, sexy "Cabin Fever." Fans of the horror genre will feel that they are in familiar territory at first. There are elements of "Evil Dead," "Night of the Living Dead," "Deliverance" and "The Texas Chainsaw Massacre" in Roth's film. When you start to feel comfortable in these familiar surroundings it will be too late. You have fallen into Roth's trap. "Cabin Fever" is impressive because it takes such familiar surroundings and twists them into an original tangle of terror. Despite the scares, "Cabin Fever" also delivers a large number of darkly sardonic laughs. I walked out of the movie thinking that I must be a sick and twisted individual because I laughed so much. Once you see the movie, you will know what I mean.

Five friends rent a cabin in the woods for the weekend. Jeff (Joey Kern: Garmento) and Marcy (Cerina Vincent) want to spend their time screwing. Bert (James DeBello: Scary Movie 2) brought a gun instead of a girlfriend. Bert wants to drink beer and shoot squirrels. Paul (Rider Strong: Sean from Boy Meets World) has had a lifelong crush on Karen (Jordon Ladd: daughter of Cheryl and David Ladd). Paul hopes to finally take his friendship to another level. Little do they know that the fun is going to be short lived. So is much of the cast. Instead of demonically possessed vines or inbred, cannibalistic rednecks, our young cast find themselves at the mercy of a flesh-eating virus.

I really don't want to spoil this movie for you, so I won't give away anymore of the plot. As is the case in many horror films, character development is not that important. The performances are good of sorts. Actor Giuseppe Andrews has a bizarre and funny supporting part as a clueless deputy sheriff. There are a large number of small character parts that lift "Cabin Fever" several notches above your average horror film.

The star of "Cabin Fever" is director Roth. He expertly builds the tension and delivers a number of relentless set pieces. Roth knows how to deliver both shocks and suspense. What makes Roth a director to watch is his ability to make the familiar strange. Roth scares you and makes you laugh at the same time. His film manipulates the audience in ways you may not like. Roth wants to push your buttons. There is a very hot sex scene between Jeff and Marcy. At the last minute, Roth reverses gears on you. Roth fucks with you during the horror scenes as well. This talent makes "Cabin Fever" better than it had any right to be. There are a number of plot choices that seem like bonehead moves at first. Overall, though, they turn out to be the right choices. There is a politically incorrect joke involving a rifle that is very funny. "Cabin Fever" is very gory. The sound effects are very effective. Roth's version of the horse head scene from "The Godfather" will make the horniest teens think twice before looking under the covers.

Picture Quality: 9/10
The putrid mixture of dark red, mangy yellow and something I think was brown are vividly displayed in the film's dead-dog opening! Never has gore looked so sickeningly good! Lets not forget the flesh tones: before and after! Sexy Cerina Vincent nicely shows off her well-sculpted body. Excellent tans and pinks! No delineation problems during the sexy glimpse of her backside! Let the rotting begin. Decomposition has never looked so good.

Sound Quality: 8/10
At times the low ranges overwhelm your home theater system. My sub-woofer distorted in a few places. Otherwise, nice balance between the ranges. Full rich tones. As is the case with most great horror films, the soundtrack accentuates the shivers.

Easter Eggs:
On the main menu, you can click on the Lion's Gate logo to see trailers.

Jim also told me about another Easter Egg. I couldn't get it to work. You try and let me know. Push enter on Chapter 24. You will see a big bunny rabbit. Push Enter again and it will take you to a "Tribute to Jake." Let me know if it works. I have a screener copy from Lions Gate. Sometimes screener copies have glitches. Extra Features: 10/10
Making "Cabin Fever" had to have been a fun experience. It takes Five Commentary Tracks to explain everything that happened! Sometimes commentary tracks can become annoying. In this case, all are worth listening to. Of course, you have to have the stomach to sit through the movie itself in the first place.

What fun extras. I hope I get the opportunity to meet and interview director Eli Roth someday. Or better yet, work on one of his movies!

"The Rotten Fruit" is a series of short animated films by Roth that are based around a British rock band made up of some very demented pieces of fruit. It is like the Anti-Christ's version of "Veggie Tales." The DVD contains three episodes. Two are a hoot, the third is a bit lame. I'd like to see a complete series DVD if Roth made more of these twisted little films.

Folks who've seen "Cabin Fever" will no doubt remember Dennis, the inbred kid with a blond mullet. He reminded me of a highly functional version of the banjo boy from "Deliverance." In once scene, Dennis yells 'Pancakes' before going into a karate routine and attacking one of the film's main characters. The DVD includes an Extra called "Pancakes." It is a homemade music video of the song "Gay Bar," in which Dennis does a kung-fu routine on a mountaintop. I think this kid should be in "Kung Pow II"!

There is a couple of viewing methods on the DVD. Director Roth introduces the "Family Version" of the film. Funny, but eclipsed by the ingenious "Chick-Vision" version.

The behind the scenes featurette might not be a slickly produced as some studio featurettes, but it captures the fun spirit of this dark film. I'd work for nothing to be on a set like this.

The Final Word:
The best Zombie film ever made that doesn't contain a single zombie! Very unique and familiar at the same time. This is a must have DVD for any horror movie fan, naked starlet fan or for anyone off their meds!