WARNING: If you have ever been the victim of rape, do not go see Gasper Noe's brutal "Irreversible." If you have a strong stomach, "Irreversible" may be the most challenging film you will ever see. I found my head and chest starting to pound with anxiety as I watched the disorienting first hour of this film. It may be some time before I am able to fully digest the experience. I'm sure that I will never be able to erase the images that Noe seared into my psyche. 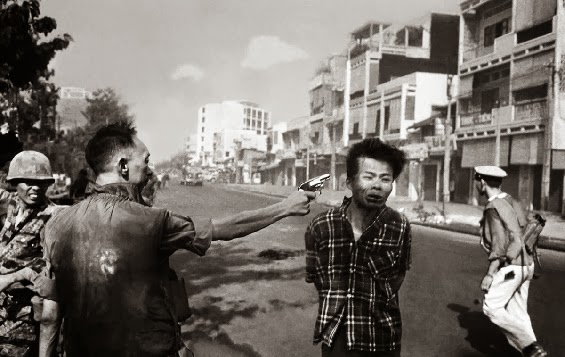 One of the most infamous images from the Vietnam War was of the Chief of Police of Saigon executing a Viet Cong soldier by shooting him point blank in the head with a pistol. The photograph and filmed footage of the event was used to illustrate the brutality and futility of that Asian war. It wasn't until 15 years after the end of the war that I found out the story behind the photo. The Saigon cop had a boyhood friend who became an officer in the South Vietnamese Army. Growing up, both men loved the same girl. The army officer ended up marrying her. They had many children. The beau who wasn't chosen remained close to his friend and sweetheart. He was Godfather to their children. When the Officer went off to war, the Cop looked after his family. One day he got a call. The family he loved, the family of his lifelong, boyhood friend had been savagely murdered. The woman he loved from afar had been raped. The children he watched over were dead. The man who did it was caught in the act. The cop was overcome by grief by the brutality of what he saw. He walked up to the man who did this to his loved ones and put a bullet in his head. Of course, the cop's act was brutal, but it was more humane than what was done to the woman and kids he loved. Right? Wrong? That's up to God to decide. The question is, was the execution of that VC and the brutality the image suggested any less palpable after finding out what led up to it? "Irreversible" deals with this subject.

"Irreversible" is told in reverse order. The film moves from chaos, to order to infinity. Benoit Debie and Gasper Noe's photography is disorienting. The first images on the screen are what you would usually see last. The credits are run in reverse, from bottom to top. I was thrown even more off kilter by the fact I don't read French. Halfway through the credits, they skew sideways and then the film explodes into a journey that may have you gasping for air or wishing you had taken Dramamine. Debie and Noe's camera twirls and rotates as if it was filmed by an epileptic on a ride at the fair. After several moments of hectic shots of a dark alley, flashing lights and the darkest abyss, Noe settles on two bums in a fleabag hotel. They talk about perversion. The camera leaps into space again. After a shorter twisting journey, Noe takes us into the bowels of a Gay S/M club called The Rectum. The police have been called. Two men are taken out of the club. Marcus (Vincent Cassel) is on a stretcher. Pierre (Albert Dupontel) is in handcuffs. Again the camera leaps into the unknown. With each leap, we are taken back in time for fifteen minutes or so.

Ten minutes into "Irreversible" we come to one of the most vile and violent scenes ever committed to film. Marcus and Pierre search The Rectum for a guy called La Tenia (Jo Prestia). The camera reveals glimpses of naked men moaning in pain induced ecstasy not seen since Sodom and Gomorrah. Marcus and Pierre finally find La Tenia. La Tenia is murdered by Marcus and Pierre. Or did they kill another by mistake? I'm still trying to figure out how the murder was filmed. It looks as if the man is actually killed. The murder is done in one shot, and it takes a long time. This isn't the most brutal scene in the film.

"Irreversible" moves back in time to reveal why these two savages have done what they did. Turns out, they are the civilized men. Both men were at a party with Alex (Monica Bellucci: Tears of the Sun). Marcus is Alex's current lover. Pierre is a former lover. Alex left the party for reasons I won't reveal. On her way home, she is attacked, raped and beaten by La Tenia. By the time this happens, the camera work has become less hectic. The rape takes up about ten-minutes of screen time. The single shot scene is stationary and unflinching. The assault on your senses is overwhelming. There were only a few people at the matinee. No one left. I imagine some would. The rape is followed by a beating that leaves Alex in a coma. It is no wonder Marcus and Pierre did what they did to La Tenia.

As brutal as the first hour of "Irreversible" is, the last 40 minutes are also disturbing. Little by little, Noe carries us back through Marcus and Alex's day. The film begins, or should I say ends, with a blissful scene of Marcus and Alex waking up, in love. The camera is steady and peaceful, like the characters. Knowing what horror awaits these characters makes their last few moments of bliss painful to watch.

What is the point of the film? I'm still trying to figure it out. I immediately thought of the photo from the Vietnam War. Is the image less shocking when you know why the act took place? If Noe trying to provoke thought and discussion about revenge, he succeeds. "Irreversible" is not rated. If it were, it would definitely receive an NC-17. This film is not for the naive, impressionable youth, people on anti-psychotic medication or victims of rape. If you are in a relationship with a victim of rape, I wouldn't recommend this film either. You will not be able to shake the images from your mind. As a criminal defense attorney, I think I will have a hard time representing someone accused of rape in the future. So powerful are Noe's images. Like Pandora opening the box, once you view this film, the effects are irreversible.