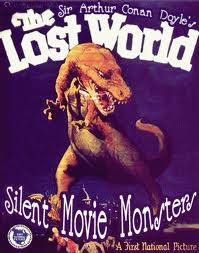 In 1925 Willis O'Brien and Marcel Delgado created the special effects which are at the heart of the granddaddy of the dinosaur movies. "The Lost World" was adapted by Marion Fairfax from Sir Arthur Conan Doyle's novel. Doyle himself makes an uncredited cameo in the movie. With the innovative use of colored tints to create mood and texture, excellent acting and outstanding special effects, "The Lost World" is in many ways superior to O'Brien's later masterpiece "King Kong."

Professor Challenger (Wallace Berry) claims to have seen living dinosaurs deep in the Amazon basin. The geographic society of London gives him a forum to clear his name after ridicule is heaped upon him for his outlandish claims. Hungry reporter Edward Malone (Lloyd Hughes) sneaks into the lecture with the aid of his friend Sir John Roxton (Lewis Stone). Roxton is a noted sportsman and big game hunter. Challenger states that he is not there to clear his name, but rather to challenge his detractors to put together an expedition to return to the Amazon. Roxton, Malone and society member Professor Summerlee (Arthur Hoyt) agree to follow. Malone later sees evidence at Challenger's home of the prior expedition. He meets Paula White (Bessie Love), the daughter of Challenger's former partner who was lost on the previous expedition. Malone arranges for his newspaper to finance the rescue expedition in exchange for exclusive coverage of the journey. 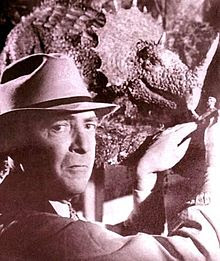 Once in the Amazon, the party arrives at a high plateau which is "The Lost World." The party climbs the escarpment and is confronted with the wonders of the Jurassic era. Dinosaur fights, volcanic eruptions and harassment by a missing link type creature are just some of the fun things in store for Challenger's group. After a lengthy sequence in which O'Brien's animation of Delgado's models, the party returns to London with a brontosaurus in tow. Thus becoming the first dinosaur movie with the creature in the big city motif.

This is a classic of the silent screen, and it still holds up well today. In fact, it seems to do better today than "King Kong" because of the silence. Seen today, Robert Armstrong's gonzo showmanship in "King Kong" has a camp quality which becomes annoying after each viewing. In "The Lost World" we don't hear the actor's speak. That is a blessing and a shame. A blessing in that there is no Armstrong-like ham ruining the experience. A shame because both Wallace Berry and Lewis Stone made the transition to talking pictures with great dramatic success. The acting is realistic in tone, unlike many silent films. A good lip reader can see that the actors are speaking the actual lines that appear on the title cards (or words to that effect). The one fault I find with this movie is the 'black faced' servant, Zambo (Jules Cowles) who's title cards read like the Stephen Fetchet lines Blacks were forced to speak in American films in the days before Paul Robson and Sidney Portier. 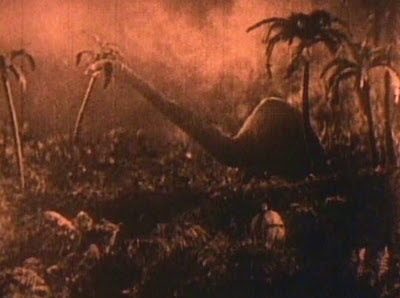 Visually this is a beautiful film. Director Harry Hoyt and cinematographer Arthur Edeson used tints to wondrous effects. Outside nighttime scenes are filmed with a blue tine. Pink for scenes inside the caves of the lost world. There is an incredible sunrise scene over the prehistoric plateau which uses a yellow tint along with lights and shadows to create an image with great depth of field and glory. It seems as if they captured the first sunrise. These touches are just great accents which showcase the film's real magic, the stop motion animation of Willis O'Brien. While not as accomplished as his work in "King Kong," "The Lost World" still stirs the hearts of cinematic dreamers today. There are two sequences which standout. The first is a stampede by hoards of dinosaurs fleeing the lava flows from a volcanic eruption. The other is the climatic monster loose on London scene. O'Brien deftly handles the mixture of live action and animation. His optical printer effects stand well above many films made 30 to 40 years later by less experienced craftsmen. 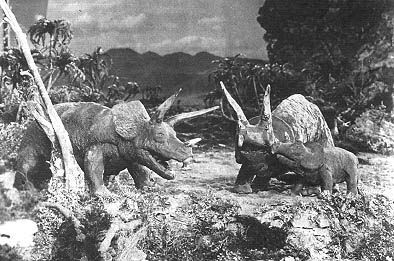 I have a hard time getting my kids to watch black and white movies. In a way they have become jaded by the amazing technological advances in film technology. I love the way film has advanced. However, there is a world of magic which has been produced in the last hundred years before CGI and Pixar. It's good to see where we have come from. At its heart, the movies are just a form of storytelling. There is a commonality among the artists who have written with the lightning of celluloid since the days of Georges Melies. If you have never seen a silent film, "The Lost World" is a great place to start. Discover the roots of the artform we all know and love.