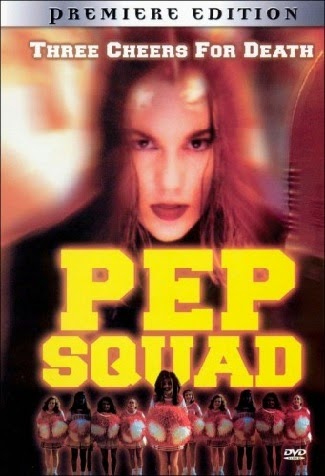 I recently got in touch with director Steve Balderson in response to a press release for his upcoming Dennis Hopper/Edward Furlong movie "Firecracker." In preparation for an upcoming interview, Mr. Balderson was kind enough to send me the new DVD version of his 1998 trash-camp cult film "Pep Squad." While the movie has some strong similarities to "Jawbreaker" and "Teaching Mrs. Tingle," "Pep Squad" pre-dates both of those films. In fact, the studio which produced "Jawbreaker" actually had "Pep Squad" for a few weeks before rejecting it. "Jawbreaker" was soon to follow. Independent filmmakers beware!

"Pep Squad" is a black comedy which deals with what happens when the most psychotic WASP princess you ever met is snubbed when the nominations for Prom Queen are announced. Cherry (Brooke Balderson, the director's sister in a knockout performance) wants nothing more than to be the Prom Queen. Oh yeah, Cherry has no problem with the concept of homicide. Her main competition is Terra (Amy Kelly). Ms. Kelly delivers a hilarious performance as the somewhat overweight, buxom 60s style Terra. The film turns into a Russ Meyerish battle of the amazons as these two towers of raging estrogen go at it.

There is a secondary plot concerning the kidnapping and murder of the schools principle by Beth (Jennifer Dreiling), Scott (Adrian Pujoi) and Julie (Summer "I'm sexy but I can't act" Makovkin). Beth decided not to take the principal up on his offer to let her perform oral sex on him in exchange for his forgiving her tardiness. Cherry and Terra get involved with the disposal of the principle's body because Scott is the guy in charge of the prom queen committee.

The story revolves around the two plotlines, but the viewer's focus is always on either Cherry or Terra. When they are on screen, they dominate the action. When they are both on the screen at the same time, it is a joy to behold. Unfortunately for "Pep Squad," no one else in the film is a consistently good actor. Adrian Pujoi lapses between good and fair. Jennifer Dreiling is OK. I had fun keeping track of how many times Ms. Dreiling and co-star Summer Makovkin went cross-eyed in the film. Summer Makovkin is a hot Meg Tilly looking actress who is terrible. She is so hot though. The fact that she took her top off makes me ashamed of myself for panning her performance. Of course, this is a B-Movie in the classic John Waters/Russ Meyer sense, so we aren't really looking for great lesbian, er... I mean thespian talents. The performances suite "Pep Squad" perfectly. This is trash fun, with a wicked bite.

Brooke Balderson and Amy Kelly keep "Pep Squad" afloat from an in-front-of-the-camera perspective. They both deliver highly diverse comedic performances. If Ms. Balderson were a Eugene O'Neill play they'd call her "The Ice Bitch Cometh." She chews up the scenery in an over the top, but appropriate performance. Whether she is running over fellow students in her Land Rover or digging bullets out of bodies with her bare hands, Balderson's Cherry is a high fashion velociraptor with sexy red hair. I dream of being tied up by a woman like Cherry!

Amy Kelly's style of comedy is more physical than attitudinal. Terra is a hefty, but well proportioned girl. She wears low cut terry-cloth dressed and wears a haircut that reminded me of my teenage sister when I grew up in the 60s. Put all of this together and let Ms. Kelly move. It is a riot. She is the sneaky one in the film. She is also so dense that she doesn't ever notice that Cherry is usually parked in plain sight behind her. I laughed the hardest in this movie whenever Ms. Kelly would scurry around to spy on others. She is just funny. It is a gift that others should study, because I got the feeling watching this movie that it comes naturally to Ms. Kelly. Watch for the scene in which Terra runs into Julie's house and tries to hide. Her beautiful bosoms are impossible to hide. It is very funny.

The man behind all of this is writer/director Steve Balderson. His grandfather's cousin was John Balderson, the playwright and screenwriter responsible for a few Universal classics from the 30s you may have heard of like "Dracula," "Frankenstein,""The Mummy," "Bride of Frankenstein" and "Dracula's Daughter" just to name a few. Mr. Balderson has some thoroughbred blood in him. A film school graduate, Steve Balderson has a very good cinematic eye. "Pep Squad" was shot on film and has a very expensive look to it. Shot when Balderson was just 22, this was his first time working with film. The movie has the look of someone who had been around celluloid since the nursery. The lighting and photography are excellent. Mr. Balderson storyboarded the entire film ALA Hitchcock and only shot what he needed. A great way for an indie filmmaker to stretch the budget. His script for "Pep Squad" is not up to par with his direction, but a majority of the jokes and set pieces work. There is the occasional acerbic line that could have been fine tuned. They work, but they could have been a little better for a bigger punch. This is really nit-picking on my part, because his direction of the twin towers of evil is great. I appreciated the pre-production work (storyboarding) on Mr. Balderson's part because his movie is lean and mean. There are no extraneous shots used to fill time. That often happens when a filmmaker doesn't plan ahead. Mr. Balderson discusses this on the commentary track. He explains that he shot no coverage. I was amazed when I heard this because the film looks as if he shot a lot of coverage and close-ups from which he edited the movie down to what is on screen. This decision shows him to be serious about the art of film. It should also serve him well on future projects. He also has a cool eye for the odd. There is a party scene in which a topless woman covered in tattoos with pierced nipples does a techno atsy farsy dance while stting in a wadin pool. A her side are tw shirtless muscl bound guys who are doing push-ups and bobbing for marshmallows in the pool. I don't know what it has to do with anything else in the movie but it was kinda cool. I'm also worried about myself because it got me hot. Anyway, enough of that.

The costumes are great. Everyone at school is dressed as if it were 1965. I was reminded of my two older sisters with their beehives and bouffants back in the day. The music is also great. "Concrete Blond" front woman Johnette Napolitano provides a driving score that rocks.

"Pep Squad" was premiered at Cannes in 1998. It was also shown at a number of other festivals such as the London's Raindance festival, the Stockholm, Portugal and Seattle Film Festivals in marketing and official entry capacity. Nominated for nine awards at the 2000 New York B-Movie Film Festival, "Pep Squad" won for best supporting actress (Brook Balderson) and best screenplay (Steve Balderson). "Pep Squad" is a lot of fun. What makes it even better is the news that writer/director Steve Balderson is set to start production on a new film with such actors as Dennis Hopper, Edward Furlong, Karen Black and Deborah Harry. With his eye for direction and flare for writing, I look forward to what he can do with a cast like this. It would be cool if he could find parts for his sister Brooke and Amy Kelly too!

Picture Quality: 10/10
I was amazed to find out that this movie was the first time director Steve Balderson had worked with celluloid. Director of Photography Rhet Bear and director Balderson put together a stylish movie with a picture that outdoes many higher budgeted studio productions. While most of the movie takes place during the day, there are a few key scenes at night which are beautifully lit. The transfer is quite good. I noticed no artifacts or pixilation.

Sound Quality: 10/10
Even more amazing than the picture quality on this feature film debut is the sound. Easier to screw up and more noticeable when it happens, the sound is also quite good. I never missed a line of dialogue. Concrete Blonde's Johnette Napolitano's score is excellent.

Menu: 6/10
The DVD box lists Chapter Stops as one of the features, but they are no where to be found on the menu. The menu works and is easy to navigate but there's not much to it from a design standpoint.

Extra Features: 6/10
The commentary track is OK. I don't think the participants knew what a commentary track was supposed to be when they made it. Most of the time they are talking about stuff that might only be of interest to the cast and crew. There are some nice insights into director Balderson's filmmaking techniques. DP Bear doesn't say that much, but when he does it is informative. There are some funny comments and catty remarks which are entertaining, but as a chronicle of how the movie was made, the commentary track is hit and miss.

The Final Word:
I like twisted comedy with a dark edge to it. I thought the performances by the two leading actress combined with the director's stylish eye for movie composition and storytelling make this worth the price of admission.