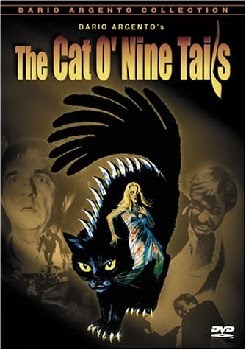 Review
Dario Argento's second film is a straight murder mystery. While there are some of the usual Argento traits such as the subjective camera work and pacing, "The Cat O' Nine Tails" is more of a plot and character driven mystery than the usual Argento style over substance shock fest for which he is known. I love Argento's work. I tried not to judge this movie along side "Suspira" or "Tenebre." Despite being a change from Argento's usual work, I enjoyed the film.

The plot revolves around a series of murders connected with a genetics lab in Italy. The lab is studying the "XYY" chromosome in hopes of developing a drug to cure the criminal tendencies and aggression linked to the chromosome.

James Fransiscus plays the Italian reporter who is investigating the deaths. He is teamed up with Karl Malden, a blind man who heard the first victim blackmailing the murderer. Along the way Fransiscus hooks up with the daughter of the lab's director, Catherine Spaak.

The film's title refers to 9 separate clues which lead to the identity of the murderer. There is no psychopathic killer loose ALA the abused child turned grown up killer in "Phenomena." Don't let the fact that there is no occult or supernatural villain stop you from seeing the movie. I enjoyed Argento's first film "The Bird With the Crystal Plumage" more, but this is an enjoyable, taut and at times humorous movie.

James Fransiscus and Karl Malden work well together. There is a scene in which they enter a crypt late at night that showcases their chemistry together. Mr. Fransiscus and Ms. Spaak also create sparks except, ironically during the film's one clumsy and flat sex scene.

The supporting cast is very good. Ennio Morricone's score works well to ratch up the tension, especially during the movie's closing scenes. Argento says in the interview that this is his least favorite film. He took all he had learned about making a commercially successful movie and put it on screen. After this film, Argento began to reinvent the Italian Giallo (Giallo means Yellow and refers to the color of the book covers of a particular type of sordid Italian novels) film. He began paring aware unnecessary elements like layered character and plot development to create his visceral style of pure shock for which fans have come to know and love him.

Leonard Maltin gives this movie a BOMB rating and says it is full of gratuitous sex and violence. I really believe that Mr. Maltin must not have seen the movie. The violence is at a minimum and the sex is limited to a quick shot of Ms. Spaak's breasts. The story is well written, although it is easy to figure out who the killer is early on.

The Disc
The disc is quite good. This is one of several Argento DVDs being released by Anchor Bay. The picture and sound are quite good. The menu is bland but navigable. The extras are also quite good.

Picture Quality: 8/10
The transfer was made from Argento's original camera negative. The quality is very good, although there are a few scenes which are grainy.

Sound Quality: 10/10
Very good sound. With Italian films you always run the risk of a poor soundtrack do to the post synchronistic dubbing. The dubbing is very good here. Ennio Morricone's great music is a highlight.

Menu: 5/10
Very bland design. Out of focus sepia stills with Morricone's music. It is easy to navigate though.

Extra Features: 9/10
The interview with Argento and others is quite good. Argento gives you insight into his life and style. It was very well done. I also enjoyed Mr. Morricone's part of the interview. I love his score for "Once Upon a Time in the West." It is nice to get an insight into the man's brain.

The radio interviews with the two American stars of the film are quite good. There is the usual amount of puffing going on, but there are some good peeks into what it was like on the set. The trailers are just weird. As usual, Anchor Bay has failed to include stills on their chapter selection menu.

The bios are very detailed.

The Final Word:
Argento fans will be glad to have this disc. Ironically, the movie will probably be enjoyed more by non fans who love murder mysteries! I want to see the movie again because Karl Malden always works his real last name into the dialogue of each of his movies. I didn't catch it in this one. Of course most Argento fans will want to view it a second time for other reasons.