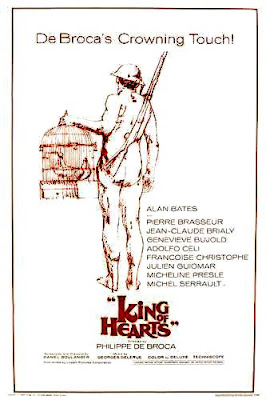 I've been pulling up some old DVD and Video Risk reviews from the cybertomb that once was EInsiders.com. Hope you enjoy. This review was from January 2001.

Who is crazier, the sane man in an insane world, or the one who retreats into a world of gentle insanity in the face of holocaust? One of the quintessential art house films of the late 60s and early 70s, Philippe de Broca's King of Hearts (1966) is a tenderhearted antiwar parable which wrestles with this question. A financial failure on it's first release, King of Hearts became a favorite of art house crowds and the midnight movie circuit in 1970. In this age of bigger is better film-making, King of Hearts is a throwback to an age when deliberate pacing, character, dialogue and subtlety were more important than state of the art special effects.

Set at the end of W.W.I, the Germans have abandoned a small French town just ahead of the advancing British troops. A spy gets word to the British that the town is mined, and set to explode when the British arrive. The towns people leave town just behind the Germans. The British send the mild-mannered Charles Plumpick (Alan Bates) ahead on a reconnaissance mission. Plumpick arrives to find the town inhabited only by a handful of Germans and the residents of a mental hospital. Through a series of events, Plumpick is hailed as the long lost King by the residents of the asylum. The rest of the movie concerns Plumpick's attempts to discover and disarm the explosives, while finding himself drawn into the simple, magic world his subjects. 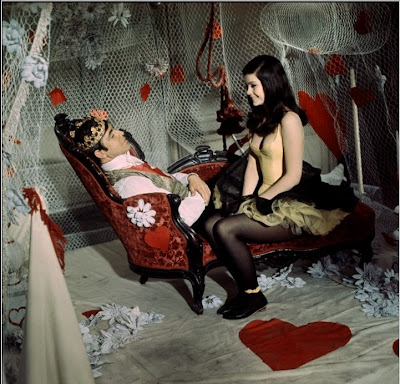 Due to a bump on the head, Plumpick is unconscious when the inmates of the asylum escape the hospital and assume roles in the town. The inmates all seem to suffer from the same illness. They are all childlike and delusional. Some critics have pointed out that this uniformity of illness was unrealistic. Well, Duh! This is a parable about the horrors of war, not One Flew Over the Cuckoo's Nest! This nitpicking criticism tells me that the critic missed the point of the whole movie. Writer Maurice Bessy and Director de Broca have definite views concerning the idiocy of war. The various inmates spout the director's views when confronted by Plumpick as he searches for the hidden explosives. At times these childlike euphemisms are hard to take. I loved this movie when I first saw it in the early 70s. Maybe I've become more jaded with the passage of time, but after viewing the film tonight, I found many of the things that appealed to me then to be overly quaint. I still recommend this video for several reasons.

There is a sweet humor to the film. This movie elicits warm smiles and a few laughs. It is not a gut-busting comedy. The inmates are lovable, and there are several standout comic performances. Michel Serrault (best known for La Cage Aux Folles) is consistently amusing as a flamboyant hairdresser, with a crush on the arch Bishop Daisy (Julien Guiomar). Micheline Presle eludes an earthy sexuality as the redheaded Madame Hyacinth. Pierre Brasseur as General Geranium and Jean-Claude Braily as the duke of clubs also turn in nice comic performances. The standout among the inmates is the young Genevieve Bujold as the woman-child Columbine. 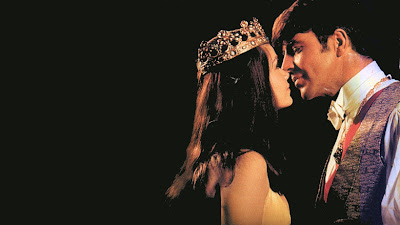 I remember sitting in the dark at the old Guild Theater in Memphis, and falling in love with Columbine as I saw King of Hearts the first time. Bujold plays Bates love interest. The world of love and death are mysteries to her. The magical butterflies that accompany first love flutter through Bujold's performance. She is a joy to behold. Her character appears to never have been marred by the pain of heartbreak. The scene in which she sings as part of a choir of prostitutes during the "Kings" coronation is a standout. Columbine is so overcome with joy of the sight of her love that she loses her voice, however she continues to sing with her eyes. Bujold captures the magic that multitudes have tried to put into words for centuries with one look in this scene. It is pure magic. I also especially liked the scene between Bates and Bujold as they came within three minutes of death. As I mentioned before, writer Bessy and director de Broca delivers the "message" of the movie through the eyes and mouths of the inmates. Columbine's reply when Plumpick cries in despair that they only have three minutes to live: "Yes, but what a wonderful three minutes" comes across as believable. This is mainly due to the chemistry between the two actors.

Bates is quite good as the bemused and bewildered Plumpick. Plumpick is a communications officer mistakenly sent into the town because Colonel MacBibenbrook (Adolfo Celi) thinks he is a munitions expert. Plumpick slowly comes to realize that the inmates of the asylum are right, and that it is those who are waging war who are insane. All of the British soldiers are portrayed as good-natured buffoons ala Nigel Bruce as Dr. Watson. I liked the scenes involving the three British soldiers sent into the town after Plumpick to check up on him. These scenes have a nice Monty Python quality to them. They are silly, but not to the point of breaking the mood off the rest of the movie. The Germans, led by Colonel Helmut von Krack (Daniel Boulanger) too are stereotypically cut from the mold of Colonel Klink. There is a short gag involving Corporal Adolph Hitler that brings a laugh. Only Plumpick and the inmates seem to have any sense.

I don't know if writer Bessy is a Veegen, but I found it ironic that the most of the "good-guys" were named for flowers (vegetarians) and the "bad-guys" such as Lieutenant Hamburger were named for meats (carnivore). Bates' character's name, Plumpick seems to imply a carnivore (Plump) who is trying to decide if he wants to become a vegetarian (Pick.) Director de Broca makes it very clear that the carnivores are destroying the world. (I'm probably reading way to much into this. Blame Dr. Mary Battle who taught me to look for symbolism during my freshman English classes at Memphis State!)

This movie was made at the height of the turbulent 60s. Vietnam played on TV every night. Civil unrest was the norm. King of Hearts found its cult following in this atmosphere. To most American audiences, the film's power is somewhat abated by the relatively peaceful times. When I first saw it, the war in Vietnam was a very real thing. The images of small children being shot to pieces in the hamlet of My Lai by American soldiers were fresh on the minds of all above the age of accountability, King of Hearts became a whimsical wish of how things should be.

King of Hearts is not for all tastes. It is deliberately paced. Some may consider the circus atmosphere of many of the scenes to be to arty. Some may be just to jaded to like it. I honestly don't know how I would react to it if I had seen it for the first time as a 42 year-old parent of three, had I not loved this movie as a youth. I point these things out because just because I like a movie doesn't mean you will.