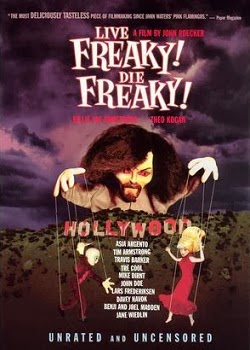 Film & Disc Review, Live Freaky! Die Freaky!
reviewed: 2006-01-19 After watching this DVD, I wrote the PR person. It's not that I don't want to tell my readers the truth, because I do. It's just that when I feel inspired to try and destroy a filmmaker and his cast and crew in a review, I want to warn the PR person first. They said go ahead. Bad press is better than no press at all.

How will this film hurt them? It will hurt the above mentioned people because their murdered loved ones are portrayed as evil and despicable people. I hope the families sue the hell out of the filmmakers to prevent the release of this horrible, hateful and harmful film.

I'm no prude. I love the bizarre. I love films that push the envelope. However. I think that when you present something as art, when it will cause real, tangible pain to specific people, then you should be tied down and anally reamed with sandpaper drill bits until you repent of your horrible actions.

What is repulsive about this film? Okay. Here goes. Sharon Tate is portrayed as a cocaine addicted bi-sexual slut who is more concerned with having an orgasm than anything else in life. She wants to destroy the environment and the poor. Jay Sebring is a homosexual slut who spends his last seconds of life sucking his own cock. Steven Parent is a drug-dealing homosexual. Abigail Folger is more interested in performing oral sex on Sharon Tate than warding off her own death. The LaBianco's are portrayed as an unhappy couple who wishes they had never married and never had children. How will this portrayal affect their children? Their children found their slaughtered and mutilated bodies! Shame on you John Roecker! Shame on you Green Day! Shame on you Blink 182! Shame on everyone involved in this hateful project.

My father was a writer. He was a Pulitzer Prize nominated newspaperman. When I was in fourth grade, I was exposed to the works of Jonathan Swift. I know what satire is. Long before most of the cast and crew of this film were born, I was watching "The Smothers Brothers Comedy Hour" and "Laugh In." People my age will realize that, that means I have a pretty good idea what satire is. I also know about the punk rock movement. I was a fan of The Ramones and The Dead Boys. My hometown of Memphis was the setting for one of the last concert performances of The Sex Pistols. As a Public Defender, I often defend people wrongly accused of crimes by an oppressive government. I say these things to let you know that I am not a radical conservative with a hidden agenda.

I want this film to fail! I want the people involved in this film to be so overcome by remorse for their actions that they crawl on their knees up to the families of Charlie Manson's victims and beg forgiveness for their cruel callous indifference.

Fuck every one of you involved in this film. I hate what you have done. Any satirical message you may have wanted to convey was lost in the hateful way you portrayed the murder victims of Charlie Manson and his deluded followers. Fuck you all!

The Disc
Fuck you all. Fuck anyone who buys this evil DVD. If you purchase this DVD, I hope you run into Sharon Tate's sisters or parents and have to explain your actions. I hope the families of the victims catch you purchasing this DVD and CD set. I hope you die of embarrassment as you try to explain why you support such so called art that further desecrated and mutilated the spirit and memory of those who have already paid the highest price for coming across Charlie and his fucked up followers.

Sound Quality: 4/10
Fuck this shit! Screw the people who made this movie. They talk about Punk. I hope this review is Punk enough for them. Fuck them! I piss on their art! I shit on their desecration of decency!

Extra Features: 0/10
Extra shit from extra shitty people. Hey John Roecker. Go explain yourself to Sharon Tate's family. "It's just satire! It's just humor!" You want to know how the Tate's feel. Maybe if some fucked up crazy bastard and his dope crazed followers murder your sister or mother, and then 40 years later some know-it-all-Punk-wannabe-filmmaker comes and portrays your mother or sister as a drugged out, slut whore who could care less about anyone and anything that won't give her an orgasm, then maybe you'll know how the Tates will feel when they see your film. Fuck you.

The Final Word:
Fuck John Roecker and the folks who made this film. Fuck you if you watch it. God have mercy on you if you actually like the movie.
Posted by obitguy at 8:47 AM