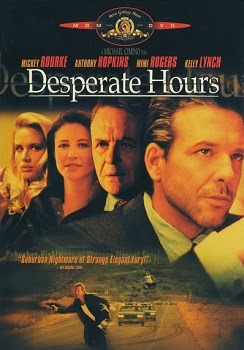 Review
In 1990, Michael Cimino's "The Desperate Hours" was released to mixed reviews. In hindsight, I believe a lot of the bad reviews were part of the backlash that hit Mr. Cimino after the "Heaven's Gate" debacle. "The Desperate Hours" was based on the play by John Hayes. The best film version was made in the 50s with Humphrey Bogart and Frederick March. All that history aside, Cimino's version doesn't match the punch of William Wyler's earlier version, but it is still a good psychological thriller.

Michael Bosworth (Mickey Rourke, in the Humphrey Bogart role) is a cold-blooded killer who masks his psychotic tendencies with a suave, reptilian charm. During an attorney visit, his foxy blonde attorney Nancy(Kelly Lynch) smuggles him a gun. He escapes from the courthouse and into a car being driven by his brother Wally (Elias Koteas) and their moronic accomplice Albert (David Morse).

For some unknown reason, Michael rips off Nancy's shirt outside the courthouse and leaves her on the sidewalk. He does this supposedly to show she was a hostage rather than an accomplice. The problem with this premise is that there was a witness to the gun-smuggling. I mention all of this because the bulk of the film concerns Michael taking over the home of an average family as he waits for Nancy to join them. In the original movie the reason for the home invasion was much more plausible. Here, we have a master criminal do something stupid because the script writer had to get him into the house. This is a flaw that the film almost doesn't recover from. It is also a flaw that prevents this remake from being a much better film.

Michael and his gang break into the home of Nora Cornell (Mimi Rogers). Nora's husband Tim (Anthony Hopkins) has left the family. He shows up this day to drop off a birthday present for his son Zack (Danny Gerard). Along with Zack, the Cornells have another child, the foul-mouthed teenage daughter May (Shawnee Smith). Once all of the characters are in place the fun begins. Michael and Tim wage a psychological war against each other for the affection of Nora and the kids. Michael must also keep the psychotic Albert in line. All of this as Michael waits for Nancy. The cop on this case is the tough Fed, Chandler (the wonderful and under used Lindsey Crouse). Chandler has more balls than any three of the men she commands. She is a shoot-first kind of cop when it comes to dealing with this dangerous trio.

I've always liked Camino's attention to detail. From his debut in "Thunderbolt and Lightfoot" through "The Deer Hunter" and including "Heaven's Gate" and "The Sicilian," Cimino has brought a precision and insight with his filmmaking. There are a multitude who would disagree with me, but I think he makes interesting movies. In addition to the aforementioned plot hole, I felt the film's biggest liability was Anthony Hopkins' cold fish performance. I never believed that he was ever a part of the Cornell family. He seemed to be in this for the money. I've admitted in past reviews that I am a fan of Mickey Rourke. I've liked what he brings to the screen ever since his cameo as the arsonist in "Body Heat." Yes he plays the same character in nearly every movie he makes, but the character he plays is always cool. If you haven't seen "The Pope of Greenwich Village" with Mickey Rourke and Eric Roberts you are in for a treat.

The Disc
I liked the movie, but there are many detractors of this film and the director in general. Good picture and sound. No extras except the trailer. Vanilla price for a vanilla DVD.

Picture Quality: 9/10
This is a beautifully shot movie. There are a few outstanding outdoor scenes involving some of the American West's best grandeur. The scene in which Albert is surrounded by the cops at Yosemite is a standout. Excellent rendering of flesh tones. Kelly Lynch has numerous topless scenes. Any thin woman considering breast implants would do well to look at this movie before having the operation. Ms. Lynch running down the street with her silicon flopping up and down is very artificial and unattractive looking. That has got to hurt. That comment is not aimed at Ms. Lynch personally. She is fine in this movie. Mr. Cimino asked her to do some very debasing things to show how much her character was controlled by Michael. However, her grapefruit looking breasts need work.

Sound Quality: 8/10
The soundtrack is good, just nothing special. It sounds a bit flat at times. There is no loss of dialogue though.

Extra Features: 2/10
The only extra is the theatrical trailer. The price reflects the lack of extras.