This was my mini-interview with the sexy and funny actress Tanya Robert at the 2003 DragonCon convention in Atlanta, GA. 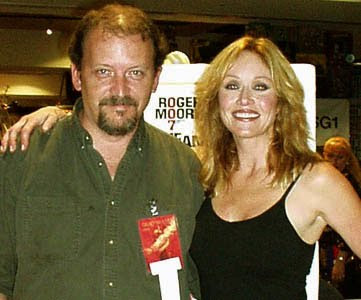 Tanya Roberts: My husband got encephalitis, a brain disease during the fourth season and was in a coma for six months. I had to leave to take care of him. He’s still in a wheelchair, but I can go back to work this year. So, I’m might go back. But we’ve developed two shows while he was sick. So I’m really not sure what I’m going to do.

RW: It’s nice to see someone make that sacrifice.

RW: Have you done many of these conventions?

TR: No, I’ve only done this since he’s been sick. It’s really trippy. It’s cool to see this side of the business.

RW: Tell me about the shows in development.

TR: They’re both for cable. One is a golfing show. I do tour events all over. And the other one is a home improvement show. So they ought to be on. We already have a couple shot. I’m also starting to do a comedy of the week with Richard Hatch. We’re doing a take off on his show "Battlestar Galactica" for Comedy Central.

RW: What’s your handicap in golf?

RW: You’ve got me beat! Thanks.