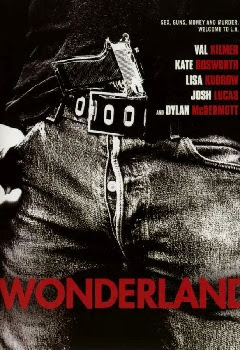 James Cox's "Wonderland" is the ultimate cautionary tale. Those considering the quick money of the porn industry and cheap thrills cocaine should watch this harrowing character study. Val Kilmer delivers a great performance as the scrungy junkie. The film joins Mr. Holmes life at the precipice of doom. He hasn't performed in a film for two years. He is a junkie who allows others to use and humiliate him for dope. The film utilizes Kurosawa's "Rashoman" story telling technique. We see a couple of versions of how the murders occurred. Whether Holmes took an active part in the murders is irrelevant. The film shows that people were robbed and murdered because they knew the man.

The supporting cast is great. Lisa Kudrow shows once again that she will have no trouble making the transition to the big screen once "Friends" goes the way of the dinosaur. She is wonderful as Holmes long-suffering wife. Likewise Kate Bosworth is great as Dawn Schiller, Holmes teenage mistress/slave. The real Ms. Schiller is one of the film's producers.

Picture Quality: 10/10
Excellent transfer. No pixilation, delineation problems or artifacts. The movie captures the lurid, putrid world of these people. The colors capture the rot of decay.

Sound Quality: 10/10
Outstanding soundtrack. The period music rocks. The violence during the movie's climax is sickeningly real. You hear bones crunch. Nice balance between the ranges. No loss of dialogue. Great use of the surroundsound features.

Extra Features: 10/10
The big extra is the feature length documentary "Wadd: The Life and Times of John C. Holmes." This film paints a portrait of an abused child who grew up to be an insecure man looking for love an acceptance. The sad thing is, he found love and acceptance with his first wife and it wasn't enough. At that point he started thinking with his very large penis and entered the world of porn. There are interviews with many of the people he worked with. The picture that emerges is both fascinating and sad. Holmes was a lost soul who made bad decisions and paid the ultimate price for his choices. The documentary is the R-Rated version. It contains a lot of nudity, but none of the sex scenes found in the NC-17 version.

The most disturbing extra is the LAPD crime scene video from the murder site. It is clinical and gruesome. The filmmakers obviously studied the video as the murders are faithfully recreated. Jonathan Hickman had a problem with the murder scenes in the film. I thought they were chilling, but not as bad as many images found in other films. They were necessary to tell this tale.

The photo gallery has no real purpose. There are short on-set interviews with four of the cast members. They discuss their roles. The "Hollywood at Large" segment is a Court TV promo for the movie combining interviews with filmmakers and real life news coverage of the murders. The commentary track will be of interest to true crime buffs as well as movie fans. The director and one of the lead detectives talk about both the movie and the real crime. Nice points of comparison between the two.

The Final Word:
True crime buffs will want this one. Parents wanting to scare the crap out of their older teens may want to share this also. A dark portrait of life on the seedy side of humanity.
Posted by obitguy at 8:02 AM