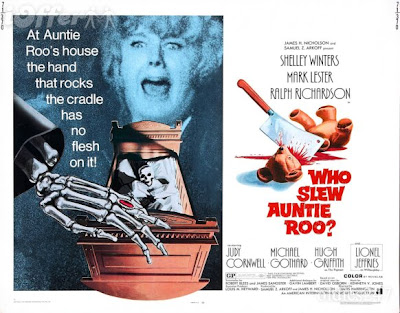 Of all the films of Curtis Harrington that I have seen, "Who Slew Auntie Roo?" is by far the most subversive. This may be due to the fact that it takes its origins from the dark world of children's fairy tales. A demented take on "Hansel and Gretel," "Who Slew Auntie Roo?" hits you after the final credits roll like a hammer. What happens when the delusions of two deranged minds collide? A person who exists on delusions must carefully protect their mental house of cards or emotional collapse will follow. 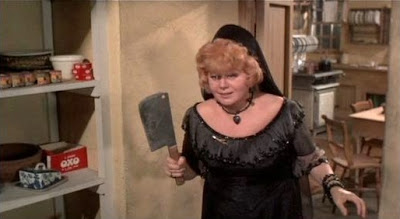 Shelly Winters delivers an over the top performance as Rosie Forrest, a fading American vaudeville star living in England who grieves over the loss of her long dead daughter. Set in the 30s, the movie opens with Rosie singing a lullaby to her daughter. The girl is shown to be a pretty 10 year old sleeping peacefully. After Rosie finishes the song and leaves the room, the camera pans back to the bed and the girl turns out to be a rotting corpse. All is not right in the Forrest household. Roll credits. A black limo glides through the stormy night and stops at the gates of the Forrest mansion. Mr. Benton (Ralph Richardson) exits the car and enters the home. He is welcomed by the butler Albie (Michael Gothard). Albie shows Mr. Benton into the parlor. Mr. Benton greets Rosie. They settle in for the business at hand. Mr. Benton is a seer who is contacting the grieving mother's dead daughter. In a scene reminiscent of the hokum that Harry Houdini debunked in real life, Mr. Benton uses all manner of illusion to bilk Rosie out of her money.

The scene shifts to the local orphanage. Children play in the courtyard as the camera pans up to a second floor window. Two children stare grimly out the window. They are Christopher and Katy (Mark Lester from "Oliver" and Chloe Franks), a brother and sister who don't seem to fit in. Christopher is berated by Miss Henley (Rosalie Crutchley) for scaring the younger children with his imaginative ghost stories. It seems that Christopher escapes the horror of orphanage living by creating his own world of imaginary monsters and bogeymen. 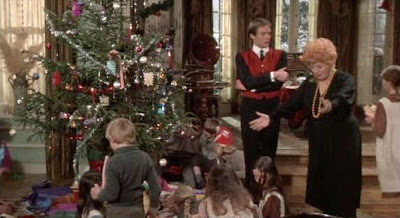 It is almost Christmas Eve. Each year, ten children from the orphanage are chosen to spend two days with Rosie, whom the children call 'Auntie Roo.' Of course Christopher and Katy are not among the lucky ones. The kids are loaded into the cars of Miss Henley and Inspector Willoughby (Lionel Jefferies) for the visit. Christopher and Katy hide in the trunk of Willoughby's car. Of course, Auntie Roo makes room the two extra children. Rosie is struck by the likeness between Katie and her dead daughter. When the children are returned to the orphanage, Katy is not among them. Miss Henley is convinced that Katy ran away, while Christopher is convinced his sister was kidnapped by Rosie. It is at this point that the similarities between 'Hansel and Gretel' begin. 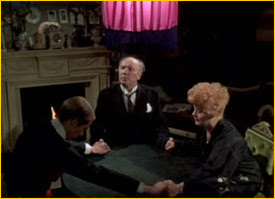 I don't write spoiler reviews because the point of the "Video Risk" column is to introduce you to a new film experience. There are times when I am tempted to break the rule, because I'd like to discuss the ambiguities of the ending of a particular movie. This movie is one of those that tempts me to break my rule. The ending appears to be your standard happy ending on its face, however there is a creepy aftertaste which will cause you to reexamine what you've seen.

"Who Slew Auntie Roo?" evokes its period beautifully. The film is plush, with rich colors and impeccable production design. Hammer director Jimmy Sangster is credited with the screenplay, although Mr. Harrington said in an interview with me that the script went through heavy rewrites on the set. The acting is for the most part quite good. Ralph Richardson brings his askew personality to the hammy role of Mr. Benton. He is a delight to watch in any movie, good or bad. Academy Award winner Hugh Griffith has a nice cameo as the Pigman. He looks like what Who drummer Keith Moon might have looked like in old age had he lived. Mark Lester and Chloe Franks are excellent as the two children. Lester's cherub looks hide the demented center of his disturbed character. Frank's Katy is nothing more than a wisp of a child. Her character is a cypher upon whom other characters impose their own beliefs as to who she is. 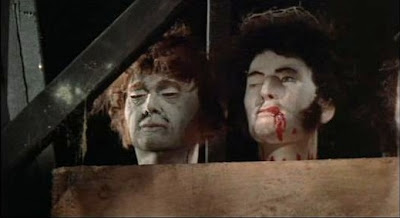 This was one of two films that Shelly Winters made with Curtis Harrington in 1971. While "What's the Matter With Helen?" is my favorite Harrington film, I enjoyed Ms. Winters performance here much more. In "Helen" her performance was more subdued. Here, she gets to chew up the scenery. She sings and dances, she wails like a forlorned banshee, and raves like a lunatic. It is a delightfully macabre turn by the Oscar winner. 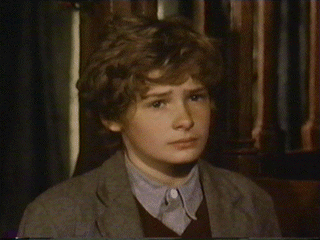 Harrington's handling of the frights is as good as he has ever done. While "Ruby" delivers many more shocks, "Auntie Roo" builds up to a tense second half. The 'children in peril' plotline is a surefire way to put an audience on edge. Harrington's elegant pacing works to those ends. All in all, this is a fun and twisted movie.