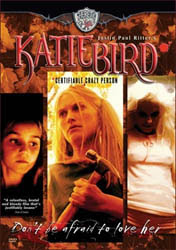 Justin Paul Ritter’s “KatieBird *Certifiable Crazy Person” is a disturbing masterpiece of subversive horror. While “Henry: Portrait of a Serial Killer” was a serious character study with horrific elements, “KatieBird *Certifiable Crazy Person” is a exploitation horror movie with unexpectedly intelligent, serious and artistic undertones. I’ve watched this movie four times in the last few days to try and figure out why it works so well. In my years at Einsiders, several up-and-coming filmmakers (think Dante Tomaselli, Steve Balderson, Jeremy Benson) have captured my imagination so much that I have tried to do everything in my power to spread the word about their work. Justin Paul Ritter is another visionary filmmaker. I hope to interview him in the future. In the meantime, I can’t recommend a movie higher that “KatieBird *Certifiable Crazy Person.” Just be sure to bring a cast iron stomach!

I have been an avid true crime buff fan since I was just a kid. More often than not, the real facts behind most serial killers are more bizarre than anything Hollywood has ever been able to think up. Justin Paul Ritter did come up with something out of the ordinary. I love the premise. What would happen if a serial killer had a child that they nurtured to follow in his bloody footsteps? Sure, we’ve had families of killers before, but we’ve never had a character like Katie Bird. Mr. Ritter’s intelligent script takes up places we have never been before. So, why is “KatieBird *Certifiable Crazy Person” so much more than your run-of-the-mill serial killer movie?

ACTING: The cast is uniformly fine. Helene Udy and Taylor M. Dooley and former racing champion Lee Perkins are scary, scary individuals. They all walk that fine line between outward sanity and inner madness that real serial killer must tread daily. When they let the inner madness surface, the results are chilling. I imagine that this group of actors was delighted to be given such a wonderful script to interpret. I also imagine that writer/director Ritter was happy with their work. It would have been easy for an actor to go over the top. The choices made by the actors in this film are as close to perfect as I can imagine.

EDITING: “KatieBird *Certifiable Crazy Person” uses split-screen to an amazing affect. The truth of the matter is, I have never seen better use of the device in any other film, including the entire works of Brian De Palma. Director Ritter uses the multiple screens for a many reasons. At times it symbolizes the fractured psyche of the killers. At other times it amplifies the emotions felt by the viewers. Other times, it just provides more story. The scenes between Helene Udy as Older Katie Bird and Todd Gordon as her latest captive benefit most from this process.

WRITING: I think this is the key to this film’s success. If you watch the movie with the sound off, it may just appear to be a stylish gorefest. Ritter’s Katie Bird is one of the most fully realized characters in the horror film genre. Three actresses play the loony killer from early childhood through her early 40s. There is an organic consistency in the growth of this character through the running time of the film. Great casting and great words by Mr. Ritter. Mr. Ritter picks his words very carefully. He is not verbose or pretentious in his choices. His words do not draw attention to him as a writer until later. His words define and expand the world of this film.

HORROR: This movie is creepy, scary, disturbing, funny…hell I could go on. The point is, you will not easily forget the images and scenes. The performances are unreal. The movie puts Katie Bird’s first killing and last killing in juxtaposition. The ritual that Katie Worked out in the beginning has become her paradigm of death. The difference is, when Katie Bird as a teen (Taylor M. Dooley) commits her first killing there is a perverted joy and zeal to her actions. The ritual performed by the older Katie Bird (Helene Udy) is tired, jaded and painful.

If one thing is for certain in the film business, it is that you need a certain amount of luck to go along with your talent. Justin Paul Ritter has tons of talent as a writer and director. Here’s hoping that lady luck smiles on him so that we may enjoy his future work. 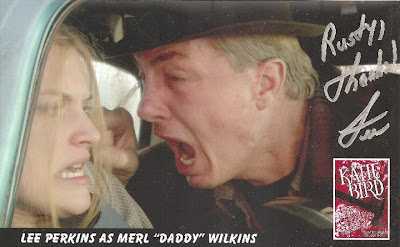 Picture Quality: 8/10
This is a digital movie. While it doesn't have the depth of field and richness of color of a movie shot on film, the movie still looks great. Director Ritter uses color themes, light and shadows as well as glaring harshness to establish mood. The horrors take place in well lit surroundings. This allows for an unflinching look at the inner workings of a mad man and his very mad daughter. No artifacts, pixilation or delineation problems.

Sound Quality: 6/10
For the most part, the sound is excellent. However, there are several scenes, which required me to play them more than once in order to hear everything that was being said. The fact that the DVD doesn't have any subtitles didn't help either.

Easter Eggs:
There are Easter Eggs on just about every menu screen. The Easter Eggs are mini interviews with the director, cast and crew.

Extra Features: 7/10
I really like the director's attitude. In the featurette "Movies, Not Excuses" director Ritter goes of on a rant about working and sacrificing for what you want in life. While I'm not big on motivational speakers as a rule, I did get a boost from this guy. He has passion. He urges the viewer to work for their passion. I loved the bit where he said, "If you tell me you're a cake baker and you haven't bakes a cake this week then you're nothing but a f**king liar." Blunt but to the point.

The commentary track by director Ritter and the three main actors is great. Halfway through, the director gave out his e-mail address and asked for comments. I immediately wrote him and asked to do an interview. Turned out it was his real e-mail address. I hope to do the interview in the next few weeks.

Folks who buy the first edition of this DVD will also recieve a second disc: a CD of the soundtrack!

Horror movie fans must buy this DVD. A new voice in the horror field is yelling and shouting high above the crowded din of mediocre practitioners. That voice belongs to Justin Paul Ritter. Long may it rave!
Posted by obitguy at 8:42 AM