Deep In The Woods 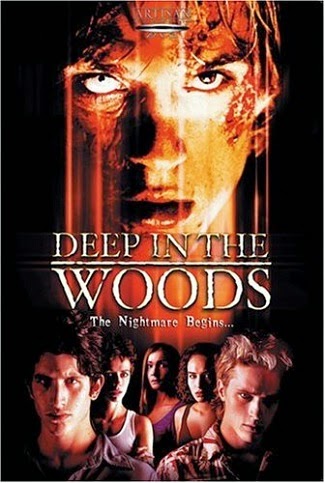 Five actors are hired by millionaire Alex de Fersen (Francois Berland from the outstanding urban cop thriller "La Balance") to perform the play "Little Red Riding Hood" for his grandson's 12th birthday. Nicolas (Thibault Truffert) is a strange child who never speaks. When he was a small child, he watched as his mother was brutally murdered on the eve of his birthday while she read him the story of "Little Red Riding Hood." The child has good cause to be disturbed.

The acting troop consists of Sophie (Clotilde Courau) and her mute lesbian lover Jeanne (Alexia Stresi). Mathilde (the sexy Maud Buquet) and Wilfried (Vincent Lecoeur) are lovers also. The egotistical Matthieu (Clement Sibony) rounds out the troop. As the group approaches Alex's country estate, they hear on the radio about a serial rapist and murderer loose on the countryside. The young actors are met at the estate's gate by the creepy game warden Stephane (Denis Lavant). They are shown into the mansion to await the arrival of their host. Alex proves to be a very strange and creepy host. The wheelchair bound eccentric takes an immediate liking to Matthieu who he calls Cedrick.

The actors are shown to their rooms. Sophie and Jeanne make love. Someone watches from a hidden port and photographs the two women. That night, the cast performs a stylized version of "Little Red Riding Hood." Nicolas stares at the play as if he is frozen in terror. At the dinner party afterwards, Nicolas drives a fork into his hand when asked what he thought of the play. "Don't worry about him, he does that all the time" is Alex's response. Alex convinces Matthieu to put him to bed. With Alex safely tucked in, the others begin to get high, dance and explore the mansion and grounds. Death comes a calling for most of the cast. What follows are a series of stylish and suspenseful slasher scenes.

"Deep in the Woods" comes close to recapturing the glory of Argento's best work. What causes this film to crash and burn is the denouement. Even though Argento stripped his story to the bare bones, his best stories always had a satisfactory explanation in the end. "Deep in the Woods" builds to a crescendo of terror that falls apart due to the film's totally illogical and nonsensical explanation of who the killer is and why the mayhem occurs.

The movie is full of stunning visuals. The death of one of the characters in a steam filled bathroom is one standout. The French have a franker way of dealing with sex. The film doesn't shy away from full-frontal nudity or lesbian sex. The violence is comparable to what you would see in an Argento film. The photography is crisp and lush. The nighttime scenes are outstanding. The acting is quite good. Several of the actors have been nominated for French Oscars. Be forewarned: this movie is best seen in the original French language with English subtitles. The dubbed version is badly done. Director Delplanque shows great style as a director. The problem lies with his screenplay. Hopefully this gifted filmmaker will be able to work with better material in the further.

Picture Quality: 10/10
This is a beautiful movie. It is far superior in looks to a majority of its American cousins. The scene in which several of the characters frolic in the woods at night is outstanding. Great flesh tones. Lots of flesh.

Sound Quality: 10/10
Excellent sound. No distortion or loss of dialogue. Again, I emphasize that the French version with English subtitles is the best way to watch this DVD.

Menu: 8/10
Good use of images from the film. Easy to navigate. Nice animation.

Extra Features: 7/10
The bios are hard to read as they are in a funky 'artsy-fartsy' script.

The Final Word:
Hard core fans will like it. I was ready to give this movie a rave review until the final 10 minutes. To me, the movie is a house of cards that collapsed under the lack of weight at the end.