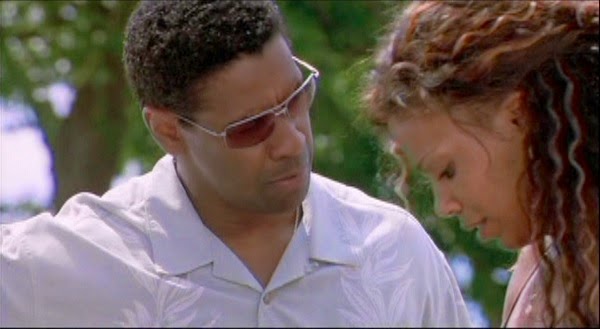 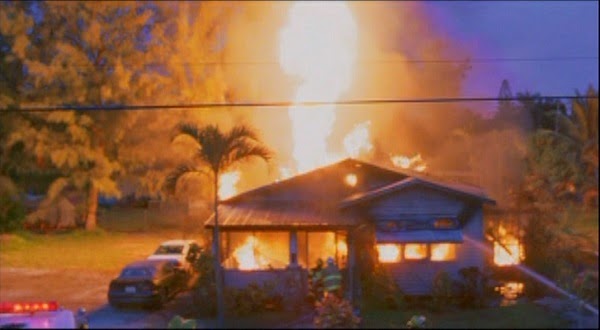 I once did closing arguments in a trial during which one of the jurors actually said "Amen!" The elderly lady nodded her head vigorously during my argument. I felt good about the odds for acquittal. The jury stayed out for about three hours before deciding to go home for the evening. When they returned in the morning, the emotional impact of my closing argument had worn off and they were left with nothing but the facts. They convicted my guy in short order. I decided that whenever possible I would try to do closing arguments in the morning. I bring this up to illustrate my feelings about Carl Franklin's "Out of Time." Last night I left the theater planning to write a 3 1/2 star review. I thought about comparing it to Lawrence Kasden's "Body Heat" and a multitude of Film Noir classics. Then I realized that "Out of Time" is a story told countless times before. I knew what was going to happen when I saw the trailer two weeks before. That said, "Out of Time" is very entertaining and suspenseful. 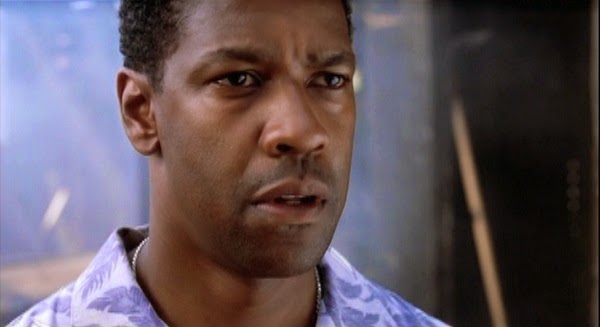 Chief Whitlock (Denzel Washington) heads a five man police force in the small town of Banyon Key, Florida. His duties include checking locked doors on storefronts after midnight. Whitlock is estranged from his wife Alex (Eve Mendes: Once Upon a Time in Mexico). Alex is a detective with the state police. He ambitions were bigger than Banyon Key. Anne Harrison (Sanaa Lathan: Blade) is the sexy abused wife of former NFL player Chris Harrison (Dean Cain). Anne is having an affair with Whitlock, even though she knows he still loves his wife. Anne has cancer. Anne needs money for an experimental operation. Whitlock has $500,000.00 in drug money sitting in his evidence locker. Things get complicated real quick. Whitlock is about to find himself under suspicion for murder among other things. I still haven't told you as much as you will discover in the trailer, but I have to stop. For anyone who has never seen a wrongfully accused man thriller, I don't want to ruin the plot. I will say that when the credits began to roll, the packed preview audience let out a sigh as if they had been holding their breath for the last hour. I know I had! 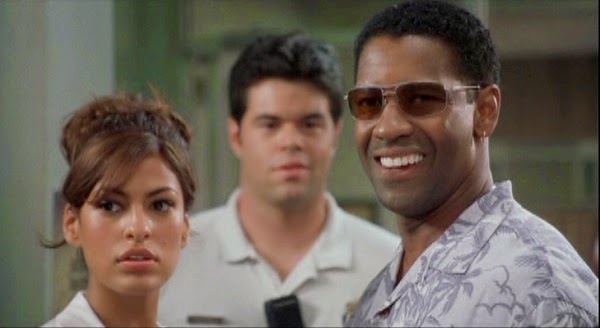 Carl Franklin has proved that he can handle onscreen suspense and strong character development. "One False Move" and "Devil in a Blue Dress" were both outstanding films that drew the audience into the character's lives while riveting the same audience to their seats with tension and suspense. "Out of Time" delivers on both counts. In fact, Franklin is to be congratulated for taking an old plot and bringing it to life. I really wish I had not seen the trailer. Because I knew what the major plot twist was going to be, I had trouble getting into the early development stages of the story. Once the trap was sprung, I truly enjoyed Franklin's thrill ride. I wonder if directors get approval of the trailers. I don't think I would want my film's plot revealed to such degree in the preview. The trailer for "The Recruit" did the same thing. Why go see the movie when you know what is going to happen? In this case, you should still go see "Out of Time" as it is one of the most entertaining and suspenseful films of the year. 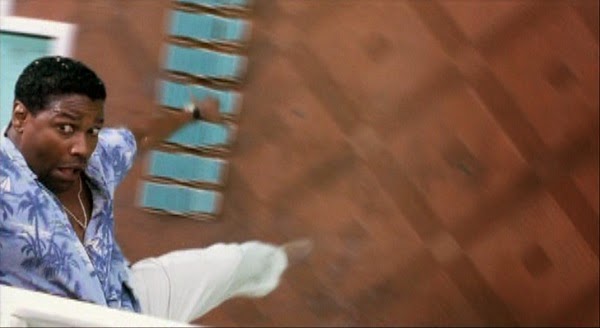 How can it be suspenseful if so much is given away in the trailer? David Collard's (The Family Guy) script is intelligent and funny. You care whether Whitlock will be able to clear his name. You care about whether Whitlock and Alex can get back together. You worry that these characters might be killed. It takes a well-written and well-acted script to make you feel these emotions. The cast is excellent. Ms. Mendes is given much more to do than she was in "Once Upon a Time in Mexico." I enjoyed Denzel Washington's performance very much. He is playing a guy who is not to bright when it comes to affairs of the heart. His grief over his marriage causes him to make some very bad decisions. Washington succeeds in this film because you forget he is a Movie Star and get lost in his character. Mr. Washington is one of the few actors working today who has the magic of the movie stars of yesteryear. Washington sets all that aside and shows us once again what a fine actor he is. 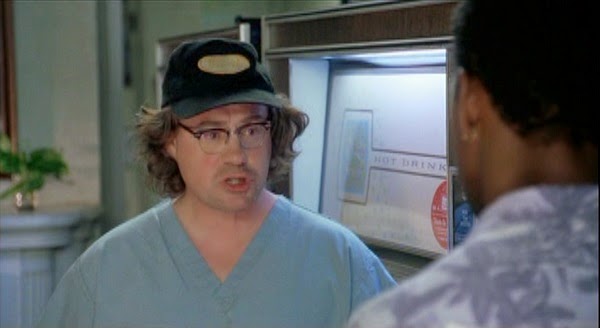 I have to point out two last things that are noteworthy in this film. The title design over the opening credits is fantastic. The title sequence reminded me of what Saul Bass might have done if he were still alive. I hate that I didn't write down the name of the lady responsible for the credit sequence. It is funky fun using Graeme Revell's funky blues theme. Finally I want to sing the praises of John Billingsly. Billingsly plays Chae, the overweight, tipsy medical examiner. He takes the written words of David Collard and creates one of the best comic-relief buddies in recent memory. If Mr. Billingsly's comic moments didn't come along every so often during the film's tension filled hour the audience might very well suffocate from holding their breath. What is great about his part is that he plays a naturally funny guy. The humor doesn't break the mood or the tension, it accents it.
Posted by obitguy at 10:12 AM