This is my 2002 interview with Hammer scream queen Ingrid Pitt from the Chicago Fantastic Film Festival.

Sexy can be classy, and INGRID PITT proved that vampires can be both. More than fangs, blood, and sexuality, Hammer Films’ scream queen Pitt, the sensual vampiress preying upon unwitting Victorians, played memorable characters equal, if not superior, to the men with whom she shared screen time. She portrayed characters that never compromised with those who stood in her way. All the while, she drove the male antagonists wild with desire. 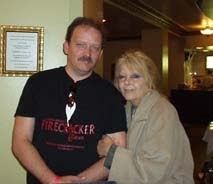 In the pantheon of horror film stars few women have come close to occupying the top ranks with male stars such as Christopher Lee or Peter Cushing. For the most part, women in horror have been little more than sexy window dressing or pathetic victims. Even Elsa Lanchester had little to do as the title monster in "The Bride of Frankenstein." Hammer Films star Ingrid Pitt was one of the few women to break through the ceiling and take her place among the best of the best.

Pitt, a Polish actress, became the object of desire for millions of horror fans in such films as "Countess Dracula," "The Vampire Lovers," "The House that Dripped Blood," and "The Wicker Man." What set Pitt apart from countless other beautiful femme fatales was her striking screen presence and finely honed acting skills.

Pitt emerged as a star during the late 1960s and early 1970s. At that time, Hammer was trying to inject new life into their ailing studio. Sex and violence became more graphic. Pitt was never shy about performing nude scenes. Anyone can take off his or her clothes on film, but there were (and are today) few talented actors who were endowed with bodies as beautiful as Pitt’s. The fact that she still draws crowds 30 years after the period of her greatest on-screen success is proof that Pitt’s talents are much more than skin deep.

Born in Poland, Pitt’s childhood was scarred by the holocaust. She survived her WWII experiences and became a successful actress. I had the great pleasure of meeting Ingrid Pitt and spending a little time with her on June 1, 2002, at the "Chicago Fantastic Film Festival." Ms. Pitt was warm and open to all of the fans that lined up to say a word, ask a question, or fawn over the British scream queen. Pointing to a still photo of Pitt and Clint Eastwood from the film "Where Eagles Dare" I asked….

RUSTY WHITE: I watched "Where Eagles Dare" a couple of weeks ago. How did it feel to shoot the Nazi characters at the end of the film?

IP: I…I had to keep swallowing. I was thinking, "I’m shooting the Nazis."

RW: Was it a cathartic experience?

IP: In some ways it was. You survive something and you have to get on with your life.

RW: Not everyone has survived what you went through. In your acting were you able to use the evil you were exposed to as a child? You portrayed a lot of evil characters? 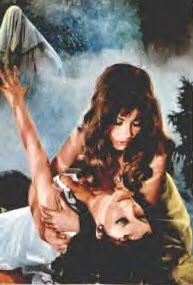 IP: Somewhat. It is more fun to portray the heavy. If you’re the victim you are quickly forgotten…or you are pathetic. You remember the heavy.

RW:Were you a formally trained actor?

IP: I started out in the theater. I was part of the Berlin Ensemble. It was a group of actors run by Bertolt Brecht and his wife. Next I was at the Actor’s Studio in New York. I left though. I went round and round with that Man (Lee Strasberg). We argued endlessly about the Russian Method. What they taught wasn’t really the Russian method. We argued and argued and I left…well, he would say he threw me out. Either way, I didn’t stay there. 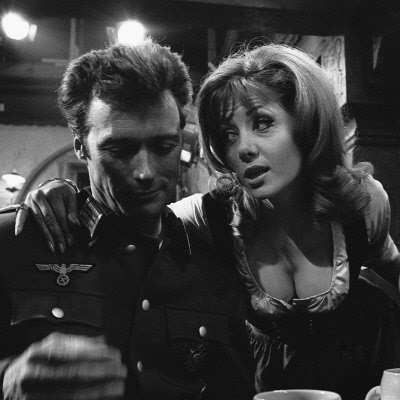 RW:Did he think the role was beneath him?

IP: No, he was tired of living. He was unhappy. He drank. His wife drank; she drank more than he did at that time. It was sad. They were a couple of sad children. It was unfortunate. They would divorce, get remarried. Really out of control. He was a man’s man; he was just tired of living.

IP: He was fun. One day he grabbed me, threw me on a motorcycle and took off. When we got back, the producers were yelling, "Think of the insurance!" We didn’t do that again.

Ms. Pitt and I spoke of things in general. She found out I was from Memphis.

IP: So, you’re from Memphis. Did you know Elvis?

RW:I never met him, but he did pay for my birth! My dad was a reporter back in the late 50s. He did a free-lance story about Elvis’s mother. That paycheck paid for the hospital bills of my birth.

IP: Elvis was a lovely man. 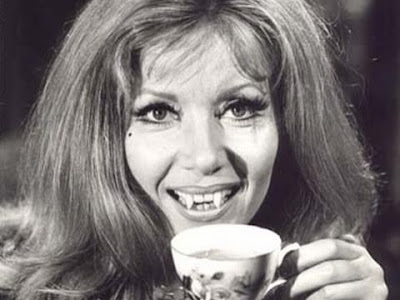 IP: We took karate classes together. He was a wonderful man. He was centered. There was something about him that made you feel secure.

RW:What degree black belt are you?

IP: I’m ranked higher in Europe. I took a different type of karate in Europe than in America. You can’t always have a gun. You have to have something in your life that gives you security. That makes you safe.

RW:I left Memphis in a rush and forgot to bring my DVD of "The Wicker Man" for you to autograph. At the time, did you realize that you were working on something special?

IP: We felt like everything was going down the drain. British Lion (the production studio) was being sold at the time. No one at British Lion wanted to make the film. At Cannes, the producer had a Wicker Man statue made to promote the picture, but British Lion wouldn’t let the film be shown. The film was cut and cut and forgotten. It was American college students that made the film a success. Roger Corman had an uncut print. A lot of the film was lost forever. Christopher (Lee) said that the film was buried under the motorway. I don’t know what happened to the missing film.

RW:Fortunately we have the restored version now!

IP: I understand that Nicholas Cage is talking about remaking "The Wicker Man." I don’t see why they would do that.

RW:Remaking "The Wicker Man" would make as much sense as remaking "Gone With the Wind" or "Casablanca."

IP: Exactly. They got it right the first time. I can think of few remakes, which are better than the original.

RW:The only one I can think of off-hand was Richard Lester’s "The Three Musketeers." It was fun and bawdy, but so was the book. 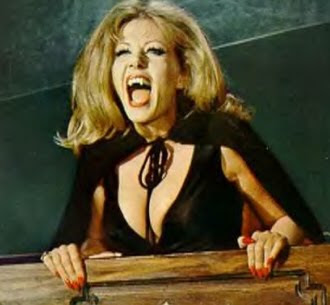 RW:Did you ever work with him?

IP: No. (A sad smile crosses her face.) He was a dear friend. A dear, dear man. It is still hard to believe he is gone.

RW:It’s hard to watch "Gladiator" without thinking about the fact he died during filming. I liked that they dedicated the film to him.

IP: Exactly. I had a CD of the soundtrack. I would listen and remember…. I lost it. Oh well, life goes on.

RW:America has a puritanical streak that makes it OK to show violence onscreen, but sex is frowned upon. There seems to be a healthier attitude in Europe concerning sex.

IP: There are problems there too. "Countess Dracula" was tame compared to what I wanted to do.

RW:I love that film. I thought it dealt with its subject in a mature manner.

IP: Elizabeth of Bathory was just evil. It was horrendous what she did to those girls.

(Note: "Countess Dracula" was based on the true life story of Elizabeth of Bathory, a noble who believed that bathing in the blood of virgins would give her eternal youth and beauty. She murdered countless peasant girls out of vanity.)

IP: Trevellian (the British censor) wouldn’t let us film many things we wanted. He would say, "Cut this, cut that." We couldn’t show much. The scene with the whore…I wanted to hang her upside down from the ceiling. I would lie nude below her and bathe as her blood poured over my body. They wouldn’t let us do that. I wanted to show just how evil this woman was. It was horrendous what she did to those girls. 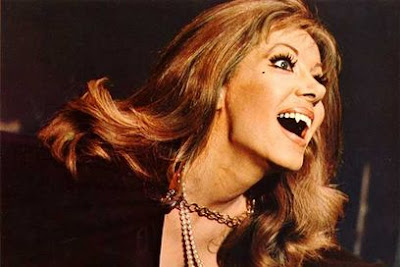 RW:(Noting the fans who were showing up to meet Ms. Pitt) I’d love to talk all day, but there are others waiting to talk so, thank you very much for giving me this time. I just want to add that you have the sexiest nose that ever graced the screen.

IP: Lets say I have an optimistic nose!

RW:Thanks again for your time!