HAXAN (WITCHCRAFT THROUGH THE AGES) 1922 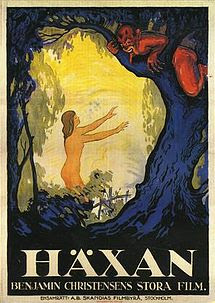 In 1922, Norwegian filmmaker Benjamin Christiensen wrote, produced directed and starred in one of the most offbeat, bizarre documentaries ever made. This history of witchcraft purports to be an expose of religious persecution fueled by an ignorance of science. Even today, Haxan is highly entertaining. Full of innovative special effects, naked women and child sacrifices, Haxan would go well flashed on the wall of a rave party. There are several versions available. The one I saw was a 1966 restoration with narration provided by William Burroughs and a new jazz score by Jean Luc Ponty. The narration by the author of "Naked Lunch" adds greatly to this wild movie.

The film takes place in three sections. The first section gives an overview of demons and witches by showing artwork from several sources. The second section deals with the inquisition during the middle ages. This section alone is worth the price of admission. The third portion takes place in modern times in which psychological explanations are given for the actions of the women in second portion. To tell the truth, I fast forwarded over this useless and pointless epilogue. The middle part rocks. 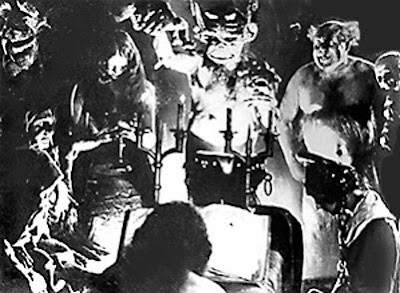 Filled with grotesque and surprisingly erotic imagery, the middle portion of "Haxan" deals with witch hunting in a medieval European village. Two old crones are shown making a potion to drive the local priest wild with lust. One of the hags pulls the rotting arm of a man hung on the gallows from a bag. She remarks that it has putrefied to much to be of any value. Of course she adds, some "cat shit" should remedy the problem. Needless to say, the church is informed that there are witches about, and the inquisition begins. After several long scenes of torture, which no doubt are still an inspiration to the makers of adult bondage movies, the elderly woman being tortured begins to confess. This long scene is filled with surprisingly good special effects. There is an impressive traveling shot of hoards of witches flying through the night on broomsticks. There is also a stop-motion animation scene of a demon walking through a wall. As the old woman spews forth her confession (and implicating the very women who accused her!) we see a midnight bacchanal presided over by Satan himself. The women of the town line up behind Old Scratch and kiss his ass literally. A naked women writhes on the ground as her demon lover approaches. All enjoy a stew made from a sacrificed child before settling down to a hot orgy. Demons sit back in a masturbatory frenzy as each of these mortal women drop trousers for the devil. As the confession continues, the priests carefully transcribe everything. They are also shown to be aroused by this. To purge their own lusts, they partake in flagellation. When that doesn't work, they enthusiastically renew their purification of the harlots that cause them to sin. This is some wild and crazy stuff. The imagery is still powerful today. That is quite an accomplishment considering this movie is 78 years old. 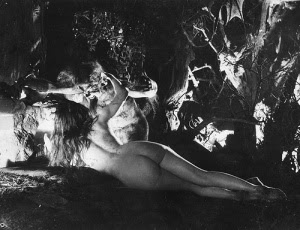 The final act is a condemnation of the medieval techniques which were based on an ignorance of science. A boring doctor shows that modern women had the same symptoms as their ancestors but that their problems were not due to demon possession but rather mental illness. It's all a load of hogwash, because not matter which side is valid, the movies portrays women as hysterical beasts who need to be dominated by men in order to know true happiness. Like I said before, I fast forwarded through the final part. "Haxan" stands up today because of the incredible sets, erotic content, and shocking images. It is the most bizarre docudrama you will see.