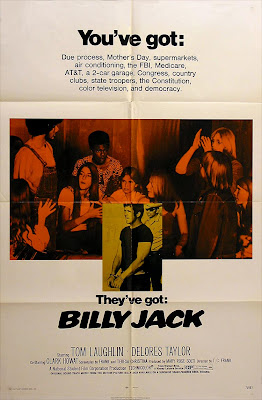 I've been pulling up some old DVD and Video Risk reviews from the cybertomb that once was EInsiders.com. Hope you enjoy. This review was from November 2000.

The movie "Billy Jack" has had a greater impact on who I am as a person than any movie I have ever seen. In 1971, at the age of 12 I was dealing with the divorce of my parents, the temptation of drugs and life in a violent and spiritually bankrupt home. I saw a trailer for a movie called "Billy Jack." The karate fight appealed to my budding sense of machismo, so I drug my little stepbrother to a matinee. Seeds of a deeper devotion to my Native-American ancestry (1/8 Cherokee), political activism, racial equality and a desire to take up karate (I never did) were planted as Tom Laughlin's independent blockbuster flashed across the screen. My stepbrother and I practiced our newfound, cinematically-enhanced Karate skills on trees, fences and mailboxes as we walked home, but inside, I was lost in thought. I've seen the movie over 50 times. I'd like to persuade you to at least see it once. 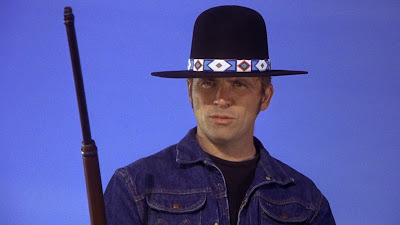 Set in Arizona, the story revolves around The Freedom School run by Jean Roberts (Delores Taylor, writer/director Laughlin's wife). Jean is a pacifist, who's beliefs are put to the test severely in this film. She is a sensual earth mother who has the gift to keep a level head amid the chaos which comes her way. She is the mother figure to the kids and the spiritual center of the movie. Jean's school is a haven to kids, troubled or not, who have been rejected by their families or society in general. The only rules are no drugs and each person must create something, preferably something which makes them proud of their heritage. Even though the school is located on an Indian reservation, it is open to kids of all races, creeds and colors. Needless to say, the school receives a lot of heat from some of the local patriots, most notably, old man Posner (Bert Freed). Posner is the big man in the county. His word is law, and he enforces his mandate with ruthless zeal. The only thing stopping Posner from having free reign in his quest for power is Billy Jack (Tom Laughlin). Billy is a half-breed, Green Beret Vietnam vet who returned to the reservation after the war and acts as the protector of the school and the reservation. Tension between the townfolks and the school comes to a head when Barbara (Julie Webb), the daughter of the town's deputy sheriff, Mike (Kenneth Toby) comes to the school for refuge after a severe beating by her father. 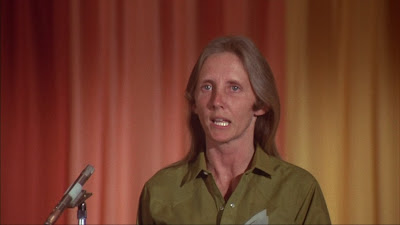 The viewer discovers the magic of the school through the eyes of Barbara, a lost young pregnant girl who compensates for the abuse she has endured with a smart mouth and a cynical outlook on love of any kind, be it platonic or spiritual. She finds herself the object of affection of an Indian youth named Martin (Stan Shaw). Martin teaches her that she can be loved for more than her ability to provide easy sex. Deputy Mike's desire to retrieve his daughter is the plot device which stokes the fire of conflict between the close-minded townfolks and the enlightened youth of the school. What really makes this movie work is that Laughlin reveals that both sides of this conflict (with a few exceptions) are both closed and open minded at the same time. 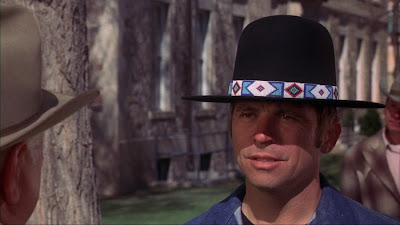 As the tensions between the town and the school escalate, Laughlin provides an ongoing dialogue about pacifism at any cost versus resorting to violence in defense of good. This old-testament new-testament examination takes place mainly through the interaction of Billy and Jean. The two characters love each other deeply. Billy is a violent man who seeks after a higher plane of existence through his devotion to his Native American spiritual beliefs. Unfortunately he has been scarred by his past and resorts to violence when cornered. There is an old cliche that parents use when they spank their children: "This is going to hurt me a lot more than it will hurt you." I believe this cliche applies each time Billy uses his Hapkido on the rednecks who terrorize the school. The rednecks deserve everything that is coming to them, but Billy is highly conflicted by what he does to them. Leonard Maltin calls Billy Jack "Mr. peace through violence." I think that Mr. Maltin misses the point of the movie. At one time Mr. Maltin gave the movie 3 and 1/2 stars. He later revised his review to give the movie 1/2 of a star. I don't know why his view of the movie changed. 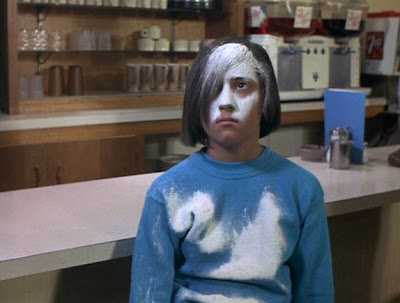 Maltin's later review seems to paint Laughlin as a hypocrite who profits from the very thing he condemns. I have always seen the movie as a condemnation of violence, and an excellent portrayal of how hard it is to change bad habits. I became a Christian at age 34 after many years of self-indulgent promiscuity. Since the change in my life, I can say that old habits die hard. Billy is a man who killed other human beings in Vietnam and in civilian life (see "Born Losers," the 1967 biker movie which introduced the character of Billy Jack) before the credits even rolled. I'm not such a close-minded fan of the movie that I can't see Mr. Maltin's point as the violence is the film is thrilling. The scene in which Billy takes his right foot and whops Mr. Posner on the side of his face excites the viewer. The karate is a definite selling point to this movie. However, those who condemn the movie on that basis alone remind me of certain members of the religious right who condemned "The Last Temptation of Christ" without even seeing it. "Billy Jack" provokes discussion about hard subjects, just as Scorsese's film did. 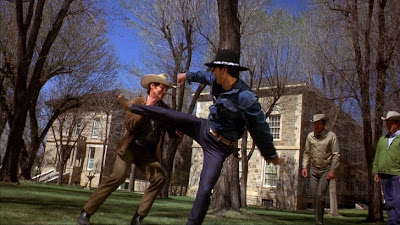 "Billy Jack" has a definite political and philosophical point of view, but it does not paint one side as always right and the other as always wrong. This point is illustrated perfectly in the best scene in the movie. In a last ditch effort to stop the juggernaut of violence between the town and the school, both parties agree to address their differences at a city council meeting. Both sides have a strong belief in the democratic way. In this scene, both sides are portrayed warts and all. They are both childish, they are both wise, they are both stubborn, they are both yearning to connect, but not sure how to do it. The movie works because of this scene and other similar ones; Laughlin does not condemn the "everyman" characters who hold political beliefs opposed to him. He nudges the viewer to examine their own beliefs by taking this tact. This is not to say that the movie has no villains. Both Posner and deputy Mike are villains who have chosen the dark side through their own freewill. 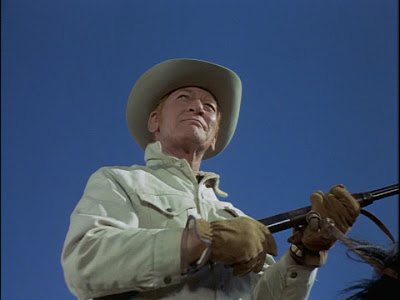 "Billy Jack" took heat and gained credibility for the abovementioned scene and others because Laughlin named names when placing blame for the condition suffered by Native Americans in this country. Laughlin pointed his finger at the Nixon administration and others well before Watergate had been burglarized. Laughlin's courage in pointing fingers almost cost him this movie. An executive at 20th Century Fox took exception to the slur upon Nixon and seized the film. Laughlin's wife, Taylor thought fast and drove to the studio and took the sound track. The Laughlin's threatened to send the studio one reel a week of the sound track (erased!) if their film wasn't returned to them. The studio called their bluff, but backed down after they received the first erased reel from the Laughlin's. All indie filmmakers owe a debt of gratitude to the Laughlin's for their devotion to their vision. Sylvester Stallone's sacrifices to get "Rocky" made pale by comparison to what the Laughlin's went through. 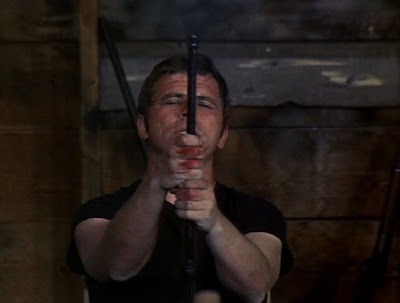 If I have a complaint with the movie, it is the way it deals with the character Bernard Posner (David Roya). Bernard is the twentysomething year-old son of Mr. Posner. He does not have the spine or stomach to be the type of man that his father wants him to be (Evil). Bernard only wants to gain his father's respect, but he must lose his soul to do so. Bernard commits great evil in this movie. I was very disappointed that the view point of Jean's character played less of a role in Billy's dealings with Bernard. I really believe the movie pushes Jean's point of view as the answer to life's difficulties, but the unstoppable force of Billy's personality overwhelms Jean's at times. This fault is understandable because, as in real life, good-intentioned people make mistakes. Billy makes mistakes and pays dearly for doing so. The fact that Billy isn't perfect, nor does the film claim so, is one of the movie's great strengths. There are no supermen or women. Only imperfect people living as best they can. The movie asks the viewer to examine their life and try to do better. This is a thought to keep in mind when voting for President next week! 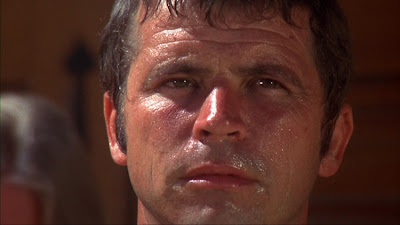 This is a message movie. Don't let that stop you for seeing it though. "Billy Jack" is well written, acted and photographed. There is tension, suspense, pathos and humor. I do have problems with the third Billy Jack movie, "The Trial of Billy Jack." I felt that the sequel tried to cover too much ground at the expense of intimate development of the characters fans came to know and love in the 1971 film. Nevertheless, it too is worth a look. I have never seen the fourth and final Billy Jack movie, "Billy Jack goes to Washington", a remake of Capra's classic with Laughlin in the Jimmy Stewart role.