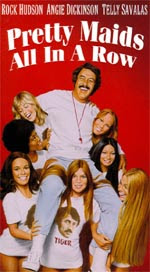 I've been pulling up some old DVD and Video Risk reviews from the cybertomb that once was EInsiders.com. Hope you enjoy. This review was from September 2000.

What do you get when you mix Gene Roddenberry, Roger Vadim, Rock Hudson, Angie Dickinson, Telly Savalas, James Doohan, Roddy McDowell, Keenan Wynn, Donny Osmond and numerous sexy starlets? Either one interesting dinner party or the 1971 movie "Pretty Maids All in a Row." Produced and screenplay by Roddenberry, directed by Vadim (with the theme song "Chilly Wind" sung by a prepubescent Donny Osmond). "Pretty Maids" is a twisted, black comedy which examines the sexual revolution in Southern California in the 1960-70s.

THE STORY: The plot is twofold. Hudson plays a high-school guidance counselor who splits his time between seducing willing young high school nymphs, warding off the advances of an incredibly sexy and frustrated English teacher (Angie Dickinson), and mentoring a perpetually erect male student (John David Carson) who can't seem to get past all of the miniskirted beauties who populate his school in order to develop a meaningful relationship. The previously mentioned plot line is moved along by the search for a serial killer who seems to be targeting all of the nubile young students who sashay across the screen. 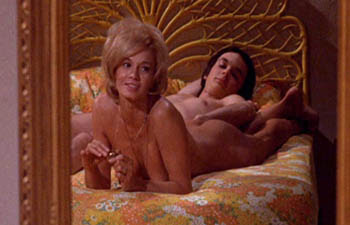 THE REVIEW: This movie is exploitation, but is also a scathing indictment of the sexual revolution which put the "if it feels good, do it" philosophy ahead of personal responsibility and meaningful human connections.

The performances are excellent throughout. Rock Hudson comes across as the epitome of masculine sexuality. With the later revelations concerning his true orientation it is hard to watch this movie and not believe he deserved an Oscar. That statement is not meant as a slur on our gay brethren, but rather a sincere observation. Hudson's character is obsessed with women. He has bought into the free love movement 100%. There are so many pleasant surprises in his performance. Watch for the scene in which he flirts with the woman walking down the sidewalk near the beach. 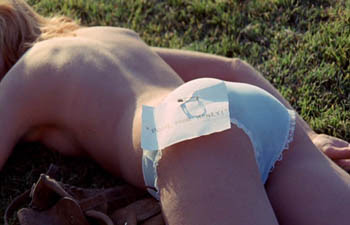 Rock's scenes with Angie Dickinson are both sensual and hilarious. This is in a large part due to Ms. Dickinson's flawless performance as the frustrated single school teacher. She has never looked better than in this film. Her character feels that the sexual revolution is passing her by, yet, she can't seem to commit to the uninhibited lack of morals such a lifestyle entails. She is willing to try, but in her heart of hearts she is a good girl looking to settle down with a man that she can devote her life to. Of course, she wishes that the man would be Rock Hudson's character. He puts her off, though. Why? You figure it out. 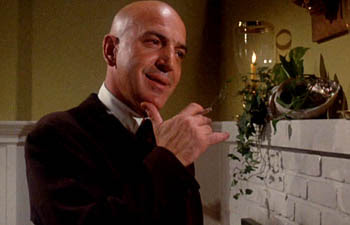 The supporting cast is fun to watch. We have a pre-Kojak, lollipop sucking Telly Savalas as the detective investigating the murders. He is both bemused and shocked by the overtly sexual teenaged girls he interviews. Roddy McDowell provides an amusing turn as the blind-to-everything principle of Nympho High. Keenan Wynn turns in an amusing performance as the towns bumbling sheriff. His sheriff is not unlike the one-track-minded Major "Bat" Guano from "Doctor Strangelove." These characters, along with Ms. Dickinson, represent the post-WWII establishment which is trying to come to grips with the new-aged freedom and philosophies spawned by the turbulent 1960s. These folks do not know whether to embrace these new mores or be repulsed by them. Their responses provide both humor and pathos. 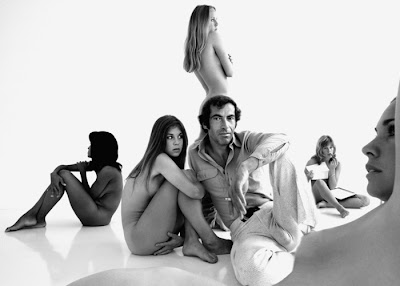 John David Carson's character epitomizes this conflict. He was obviously raised to respect the values of the earlier generation, yet, he wishes to partake in the bacchanal which is going on around him. He turns to Hudson for advice. Hudson's "solution" to his problem provides one of the movies funniest scenes as Dickinson is enlisted to cure Carson's "impotence." Any male who ever fell victim to the "uncontrollable erection in a public place" problem during their early teen years will identify with this guy.

The movie seems to lose steam toward the end. By that time everyone will have figured out the "mystery" of the murders. The "message" of the last scenes seems a bit hollow considering all that has come before. This weakness aside, "Pretty Maids" is worth the cost of admission.