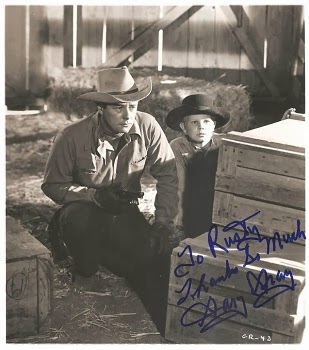 If you want proof that there is life after Hollywood, you need look no further than Gary Gray. The son of a Hollywood business agent who took care of business and stayed grounded, Gary is a man of stability who fondly remembers the numerous mega stars he performed with as "the people I worked with". A child star who's career spanned 20 years, Gary Gray gave it up while he was still working steady, and did so without regrets. Why should he have regrets, Gary has a wife of 41 years, 4 kids and 19 grandkids, plus he is retired from a successful second career as a business man.

Gary worked with many of the best. His favorite of all his films is the classic "Rachel and the Stranger" with Loretta Young, William Holden and Robert Mitchum.

RW: On "Rachel and the Stranger" you worked with Robert Mitchum and William Holden. They were two of the hottest stars of the day. Were you in awe of them?

Gary Gray: These were the people I worked with. I grew up around show business. My dad was an agent. He was a very behind the scenes man. He didn't make a big show of things. He kept me grounded. I just looked at them as coworkers. Now, Gabby Hayes, I was in awe of him because he was a cowboy star and that is what I wanted to be!

Gary fondly remembers William Holden. A lifelong relationship was formed on the set of "Rachel and the Stranger." 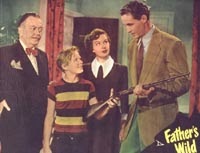 GG: I wanted a BB gun. My mother wouldn't let me have one. She was afraid I would shoot my eye out or something. When the film wrapped William Holden came up to my mother and I. He had a present for me. A .22 rifle. He asked my mother if it was OK to give it to me. How could she tell William Holden no! I still have that gun. Years later, my father managed Stephanie Powers' career, this was during the time that she and Mr. Holden were involved romantically. Every time he (Holden) came with Stephanie to my father's office he asked about me and my wife. He was a gracious man.

RW: I was a big fan of his work. I was really saddened by his death.

GG: It was a tragic waste, the way he died. It could have been avoided. 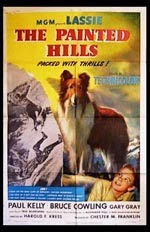 GG: My only real memory of Nancy Davis (Reagan) in "The Next Voice You Here" was her sitting cross legged on the bed wearing peddle pushers, while we practiced our lines. Other than that, I really don't remember her that well. As for the President, I've got a nice story. I was set to be in Washington D.C. during the 80s. A friend of mine said that I should write the President and ask to see him. I told my friend I wasn't going to bother the busiest man in the world. My friend sent a FAX behind my back. I was sitting in my living room when the phone rang. "Is this Gary Gray?" Yes. "This is President Reagan's office." So I met with the President at the white house. I brought a still from the movie "The Girl From Jones Beach." (In the still, President Reagan is tweaking young Gary Gray's cheek. Behind the President stands the sultry blond, Virginia Mayo.) I asked him to sign it. I told him, 'You know Mr. President, I was a lot more impressed with Virginia Mayo than you!' The President laughed and said "She was a very pretty woman."

One thing about Gary Gray that strikes you is his positive outlook on life. His attitude comes from his core. I observed Mr. Gray interacting with other fans over the four days and his attitude appeared genuine to me. During one of the panel discussions, actor Jerry Maren (The Lollipop Kid from the "Wizard of Oz" was asked about his costar munchkins Billy Barty and Billy Curtis. When Mr. Maren made some disparaging remarks about Billy Curtis Gary Gray interrupted to defend Mr. Curtis. Mr. Maren retorted his opinion and again Mr. Curtis stood up for the absent Mr. Curtis. I mentioned the impression the exchange had on me the next day. RW: I was impressed by the way you stood up for Billy Curtis at the panel discussion yesterday. It's easy to back-stab and say bad things about folks. I liked the way you just jumped right in. I mean, take Joan Crawford for example. Everyone knows from "Mommy Dearest" that she was evil and is probably in Hell as week speak. I know that's not a Christian thing to say, but it is to illustrate a point.

GG: I know what you mean. I worked with Billy Curtis. He was a delight to work with and a real decent man. I had to say something. I tell you another thing. As far a Joan Crawford is concerned. On one of my first movies I was a kid playing hopscotch in the park. I fell down and cut my knee. Before my own mother could get to me, Miss Crawford ran, picked me up, took me into her trailer, cleaned my cut and gave me some chocolate. She did all this without publicizing it or telling anyone. I don't care what anyone says, she had to have had a decent side to her to do what she did for me for no reason other than to help a child who was hurt. Besides, she was dead when that book was written. She wasn't around to defend herself.

GG: He was very business like. He did his work, went to his trailer and came out when he had scenes to do. He funny on film but he wasn't funny all the time. Now Red Skelton, he was funny all the time. Sometimes it was hard to get things done because he would have everyone laughing.

GG: We weren't friends or anything. I was about 5 years older than he was. That was a fun movie (Two Weeks) though. Busby Berkley was directing a musical number. He had grown weary by this time in his career and didn't direct entire films anymore. He just did the big musical number. I remember sitting on the set watching with Debbie Reynolds. We were goofing off and singing along. Berkley almost threw us off the set.

GG: She was beautiful. I mean beautiful. All the kids liked her. I was president of the Rhonda Fleming Fan Club. She loved it. She had T-shirts made that said Rhonda Fleming fan club, took us bowling. A great lady.

I was about to say something lustful about Ms. Fleming (Out of the Past), when a woman walked up. Gary introduced me to his wife. The best deal a car salesman ever got. GG: After my last movie, I got a job selling cars. I always got a regular job between movies. No need sitting around when you can work. I sold a car to a man who had a beautiful daughter. I asked her out. We had three dates before she went away for summer vacation. When she came back I asked her out again and asked her to marry me. Six months later we got married, that was 41 years, 4 kids and 19 grandkids ago.

Gary went on to have a second career as a business man in the Northwest. He is retired now.

GG: We have too much fun to work. We travel a lot. Go to these festivals, just enjoy life.

If ever a person had the right attitude to enjoy life it is Gary Gray. I'm glad I got to spend the short time with him that I did. The highest compliment I can pay him is that he is a very decent man.