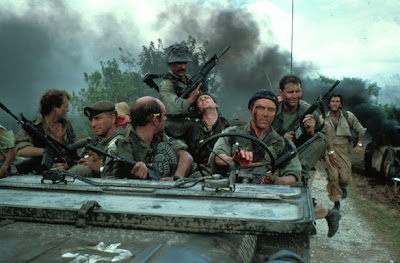 John Irvin’s 1981 "The Dogs of War" is a rare look into the closed world of mercenary soldiers. Based on a novel by Frederick Forsyth, "The Dogs of War" stars Christopher Walken as Jack Shannon, a Vietnam Vet who practices his profession even though his country is no longer at war. He leads a group of professional soldiers available to whatever government has the money to pay them. While "The Dogs" of War" doesn’t disappoint in the action department, the film’s real glory is the character driven script brought to life by Walken especially, but with a strong assist from several costars. Taut, dark and gritty, "The Dogs of War" is about as far from being a chick flick as one can get. 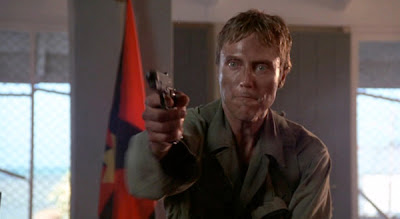 It is 1980, Jack Shannon, Drew (Tom Berringer), Terry (Ed O’Neal) and Derek (Paul Freeman) are in Central America. As mortar shells rain down on the jungle airport, the group’s jeep speeds toward a DC-3 twin engine plane full of rich folks escaping the war. Jack and his men force there way on board. When a Latino soldier points out that one of Jack’s men is dead and should be left behind, Jack looks at the squad of soldiers and says "Who do I have to kill first!" They back off as Jack and Drew throw a refugee off the plane to make room for their fallen comrade. Derek pulls the pin from a hand grenade and tells the passengers to mind their own business. In this brief, exciting opening director Irvin establishes these men as folks not to be messed with. They are loyal (only to each other), brutal and dangerous. Walken’s delivery of the threat to the Latin soldiers establishes right away that he is in charge. He delivers a great performance from the start. 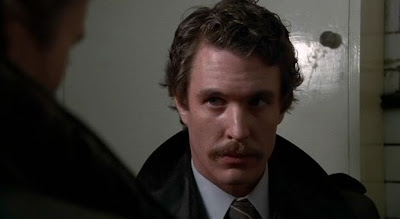 The locale switches to New York. Inside a Catholic church, Jack is standing Godfather to Terry’s son. The scene is straight out of the movie "The Godfather," but it is no less powerful. Jack stands before the altar of God and renounces the works of Satan. After the ceremony, Terry’s wife tells Jack that she wants him to stay away from her husband and family. She sees through the hypocrisy of Jack’s pledge. Jack feels the pierce of her gaze as she speaks. The scene is small, and almost forgettable except for the fact that Jack is beginning to see his life passing him by. The words sting. Terry’s wife wants Jack to back off because she has a family. She doesn’t want her husband running off to some banana republic and leave her a widow. Jack’s life is empty. 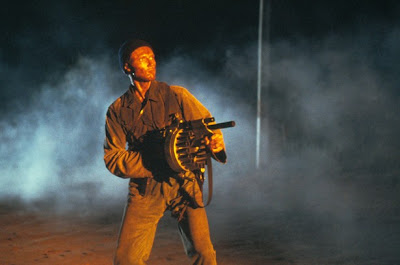 Cut to Jack’s apartment. There is a gun in the refrigerator, a gun in the desk draw, in fact there seems to be a gun within an arm’s reach from wherever Jack may be in his Spartan dwelling. His cheap TV is always on. The static on the screen seems to show how far from the mainstream of society Jack is. The phone rings. Jack tells the person to go away. There is a knock on the door. Jack repositions a pistol to a table near the front door as he answers it. Endean (Hugh Millais) steps in. He offers Jack $15,000 to fly to the West African nation of Zangara (wasn’t that the name of the guy who tried to shoot FDR?!?) and do a little scouting. Endean represents an international mining concern who wants to see if a coup is feasible. Jack accepts and we find ourselves touching down on a primitive airstrip in a poverty laden nation. Jack is now Mr. Keith, a naturalist photographer their to photograph birds. "Why the elaborate cover? Why not say you are a tourist?" Endean asks before Jack leaves. "Who would vacation in Zangara?" is Jack’s reply. No one would; this fact is conformed after our first views of the arm pit of a city. 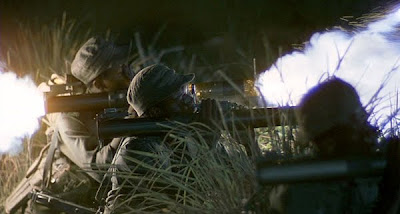 Zangara is ruled by a small time despot who is content to rape and slaughter his own countrymen. He is no threat to the outside because of his lack of ambition beyond his own borders. He sends goons to follow Jack. Jack finds himself invited to tour the town by the lovely Gabrielle(Maggie Scott). Gabrielle turns out to be one of the president’s mistresses. She uses her beauty as currency in Zangara as one character says and "the only place the currency has any value is at the presidential garrison." Jack also meets a British Tabloid journalist, North (Colin Blakely) who is trying to expose the president’s tyranny to the outside world. North is convinced that Jack is CIA. The president of Zangara believes it also. Jack finds himself on the wrong end of one of the most brutal screen beatings ever given. Jack doesn’t crack. He finds his wounds being tended to by a doctor in prison. The doctor is a fellow prisoner. He is Dr. Okoye (Winston Ntshona), a former candidate for president who is held as a prisoner of politics. When Jack is well enough to remain conscious, he is loaded on a plane and deported. North slips a roll of film to Jack as he is hustler through the airport. 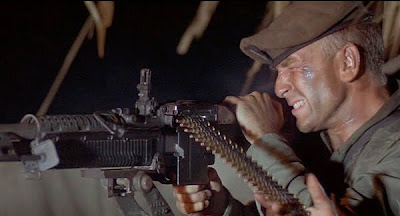 Jack makes his report to Endean: a coup is possible, but Jack doesn’t want the job. What Jack wants is to have a life with his ex-wife, Jessie (JoBeth Williams). Jack meets Jessie at a motel they once used regularly. She still loves Jack. He domineering father never approved of Jack and drove the couple apart. What Jessie can’t forgive is the fact that Jack didn’t fight her father harder to keep the marriage going. Jack has $15,000 and want to take Jessie out to Colorado to rebuild their life together. Jessie tells him not to think beyond that night. She wants to make love but she knows their is no future with Jack. This rejection causes Jack to contact Endean. Jack will lead the coup. 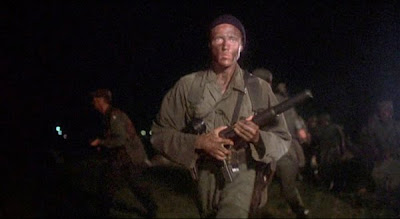 For those who have not seen "The Dogs of War" I’ll stop here. Don’t make the mistake of thinking that you can figure the rest of the story out. This is a complex thriller from the man wrote "Day of the Jackle" and "The Odessa File." The photography by Jack Cardiff is quite good. Walken shines in this movie made just after his triumphant break through in "The Deer Hunter." Paul freeman as Derek, the French mercenary and Colin Blakely are also quite good, as is Maggie Scott as the beautiful Gabrielle. There is also a standout performance by a weapon which is a one-man-hand-held purveyor of mass destruction.