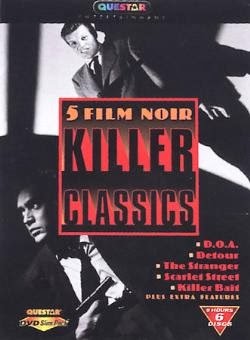 A number of the major studios, especially Warner Brothers, have recently released Film Noir DVD sets. As a fan of the genre, I try to collect each set I can find. I recently came across this collection from Questar. While the picture quality leaves something to be desired, I am still happy to have this set in my collection. ""Killer Classics" includes five films that represent some of the best qualities of the Film Noir genre. There are one certified Noir classic, another cult classic and three minor Film Noir films along with some great extras. 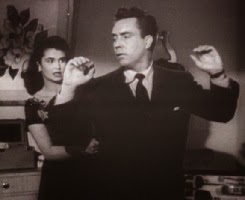 "DOA" is one of the best films in the Noir genre. Edmund O'Brien plays an accountant who finds that he has been poisoned with a radioactive Mickey Finn. He has a couple of days before he will die. O'Brien uses that time to try and discover just who it was who murdered him. "DOA" was added to the National Film Registry in 2004. It is a clever, well-written film that will keep you guessing until the end. It is far superior to the Dennis Quaid remake. 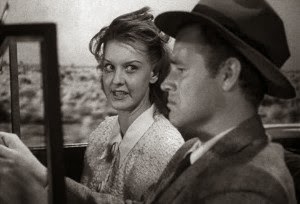 I first read about Edger Ulmer's "Detour" in Danny Perry's great book "Cult Movies." Tom Neal stars as a man down on his luck who is picked up by a shady character while hitchhiking to LA to join his girlfriend. When his benefactor is accidentally killer, Neal buries the man and assumes his identity for a short time. Unfortunately, Neal meets up with a very evil woman played by Ann Savage who knows more about the late owner of the car Neal is driving. Neal finds himself on a detour to Hell as his life is taken over by one of the great Femme Fatales in movie history. 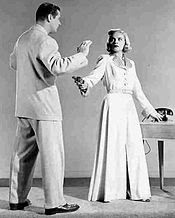 "Killer Bait" AKA "No Time for Tears" also features a great femme fatale. This time, Lizabeth Scott plays a housewife who turns into a cold-blooded killer when $100,000 literally falls into her lap. Arthur Kennedy plays the husband. While on a drive, Scott and Kennedy find a suitcase full of money thrown into thier car. Scott lusts after the excitement that the money can bring her. She will stop at nothing to get what she wants. The film has a very cool ending. I never really cared for Ms. Scott's work, but this is a great little film. Dan Duryea turns in a great supporting performance as the real owner of the money. 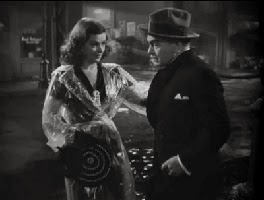 Edward G. Robinson is featured in the final two films. In "Scarlet Street" Robinson plays an older man who saves a woman from a mugger. Joan Bennett is the woman he saves. To impress her, Robinson says that he is a wealthy painter. Little does he know, the young woman was just a hooker having a run in with her pimp. Dan Duryea plays the amoral pimp. The pair decides to fleece Robinson, not knowing that he is really not the wealthy man they think he is.

In "The Stranger" Robinson co-stars with Orson Welles. Welles also directed this film. Welles plays a Nazi war criminal hiding as a professor on a New England campus. Robinson shows up as a Nazi hunter, determined to bring Welles to justice. 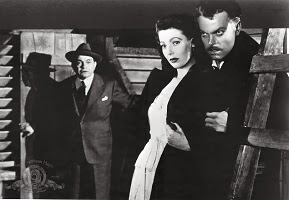 Picture Quality: 5/10
These films really needed to be restored. The picture quality varies from movie to movie. Often, there are tone changes in the film. One scene is grayish while the next one has a brown, or blue tint to it. Artifacts galore. I was reminded of the all night movies that used to play in Memphis in the pre-cable days of TV.

Sound Quality: 7/10
While there is no loss of dialogue, the sound crackles in more than a few spot.

Extra Features: 10/10
There are great extras on this DVD. The Noir Trailer gallery includes the original theatrical trailers for 38 Film Noir movies! I really, really enjoyed seeing the old trailers.

The DVD includes two excellent documentaries. One tries to define the genre by using clips and narration. The second documentary looks at one of the best aspects of the Noir genre: The Femme Fatale. What is a seedy crime film without an evil woman who wants to kill you for your money!

There is also a poster galley that includes the promotional artwork from many of the best Film Noir movies of the last century.

The Final Word:
If you are a true fan like me, you will overlook the poor picture quality and give this DVD a chance.
Posted by obitguy at 5:45 PM