An Interview with Jerry Maren

An Interview with Jerry Maren
by Rusty White
Friday, August 31, 2001

I have to admit that I got a thrill out of meeting Jerry and Elizabeth Maren at the Memphis Film Festival. The Lollipop Kid from "The Wizard of Oz" has always been a favorite cameo performance of mine. When I sat down to talk to Mr. and Mrs. Maren, Jerry wasn't feeling to well. His delightful wife Elizabeth did most of the talking.

Jerry Maren: That was a terrible movie.

Elizabeth Maren: Just a horrible film. It was nothing like what went on during "Wizard of Oz." The munchkins weren't running around getting drunk all the time like they said. We did make a lot of money for "Under the Rainbow" but it wasn't like on the set of "Wizard of Oz."

Did you remain friends with Billy Barty over the years?

Jerry: Yes, we stayed in touch. It sad that he's gone.

Elizabeth: Jerry is years older than Billy was. Billy worked himself to death. He never turned down a role.

Jerry: I haven't had to work so much. I made some smart investments and have been able to enjoy retirement. Of course the real reason I've lasted this long is the woman sitting next to me. Elizabeth is the worlds best cook.

What was it like on the set of "The Marx Brothers at the Circus?" 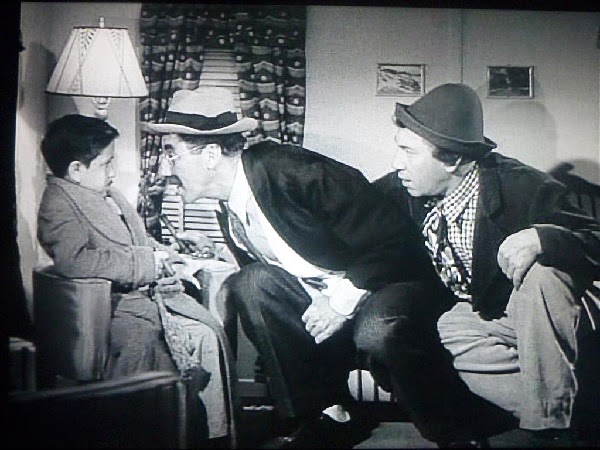 Jerry: Oh man they were funny. I couldn't keep a straight face. Groucho would get you every chance he got. He'd do something to crack you up. He was the funniest man I ever met. Harpo and Chico were funny, but not like Groucho.

Gary Gray: I have to butt in here. I worked with Mr. Curtis and found him to be very much the gentleman. He's not here to defend himself. I can't let this pass. Billy Curtis is a very fine human being.

Mr. Maren played the announcer at the recreation of the "Gunsmoke" radio show on Saturday afternoon. He an Elizabeth also treated the audience to an impromptu bit of fancy ballroom dancing at the closing banquet.
Posted by obitguy at 7:15 AM