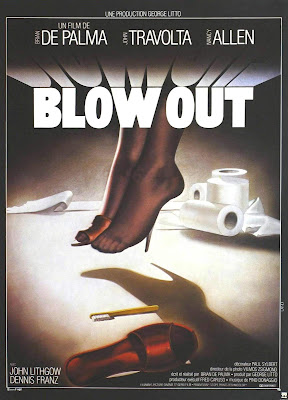 Like Hitchcock before him, Brian DePalma seems obsessed with voyeurism. In his 1981 film "Blowout," we are introduced to Jack (John Travolta), a soundman for a Troma-like horror movie producer in Philadelphia. While not a peeping tom, Jack does like to eavesdrop on folks with his directional microphones. While recording sounds in a secluded park, Jack listens in on two loves as they whisper sweet nothings to each other. His attention is drawn by another sound: the squeal of speeding tires, followed by the explosion of said tire blowing out. The car careens into the river. Jack dives in and saves the life of Sally (Nancy Allen), an airheaded hooker. He doesn't save the driver. The driver turns out to be the leading candidate in the next presidential race. Was this an accident, or was it an assassination? Jack and Sally find themselves up to their neck in political intrigue, serial murderers, corrupt cops and sleazy private investigators. What follows is a taut, suspenseful andwell acted thriller. 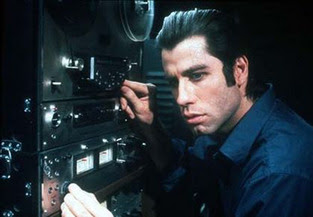 Like the superior "Parallax View," "Blow Out" plays on the viewer's distrust of all things political. Ever since the Warren Commission stated that Oswald acted alone, many Americans, myself included, have come to question edicts from on high which are not accompanied by a burning bush. Jack is such a person. It is unlikely that before the events in which he becomes entangled that he ever gave political intrigue a second thought. Jack is an everyman trying to make a living and meet a girl. Jack, however, is no dummy. He doesn't tote the party line blindly. He is also a master craftsman. His gift from God are his ears. He feels his talents as a soundman are wasted on the schlock nudie horror films he works on. As he plays the tape he made of the car wreck over and over again, a sinister picture begins to emerge. Who can Jack trust? Many of you have probably seen this little gem, but for those who haven't I must restrain myself as far as the plot is concerned. 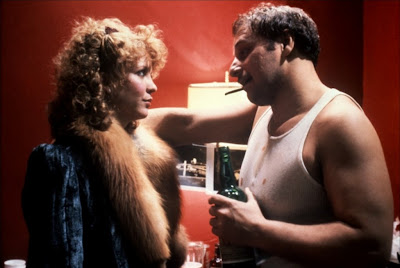 The acting is with one major exception excellent. John Travolta proved that he was a leading man with more going for him than his ability to dance. He carries the movie almost single-handedly. The viewer never doubts that he is a movie soundman. His underlying intelligence and ingenuity is also believable. I have always enjoyed his work. I refuse to see "Battlefield Earth" out of my respect for his craft.

There are numerous supporting roles which standout. Dennis Franz adds just the right touch or sweat and sleaze to his turn as a shady private dick named Manny Karp. I am a die hard NYPD Blue fan. Mr. Franz never ceases to move me in his role as Sipowicz. I like his Sipowicz character because he seems to be the culmination of all the blow hard New York characters he has played in the past. In this great movie, you see part of the genesis of Sipowicz. Franz appeared in three of DePalma's movies. In each one he played a character with similar qualities, but hey, if you're going to be type cast, you might as well be the best type cast character you can. Franz's dedication to his craft and respect to the viewer is on full view in "Blow Out."

This was the first movie in which I noticed John Lithgow. It wasn't until "The World According to Garp" that I stood up and took notice, and then realized that he was the same actor from "Blow Out." Form the first time viewer, the less said about Lithgow's role as Burke in this film the better. He is spectacularly creepy. 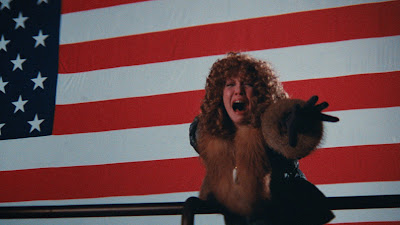 Nancy, Nancy, Nancy...what can I say about Nancy Allen. She will never read this, so what the hey. She is so bad her performance almost becomes good on a camp level. The problem is, "Blow Out" is not a camp film. I loved her in "Carrie" because besides being stupid, she was also evil and bitchy. She was fun to watch. Here she is just stupid. It is hard to believe that Jack would fall for her. Not that there aren't guys out there who would be her soulmate, but Jack is way to smart. The chemistry between them is not there. Her ditzy performance is a near fatal flaw.

Now to the real star of "Blow Out." I don't care what the purists say, Brian DePalma is a master of the cinema. I love Hitchcock as much as the next guy, but I get tempted to hire someone like Burke to silence those pseudo intellectual twerps who say that DePalma is a plagiarist with a camera. DePalma does it all, he writes, edits, directs. With the collaboration of director of photography Vilmos Zsigmond, DePalma composes a film which is as visually magic as the story is taut and suspenseful. Using slow motion and split screen in appropriate places, DePalma beguiles and mystifies the viewer as he manipulates them toward the film's conclusion. This is not say that he uses camera tricks to defy logic and reality, the camera effects further the story in a logical manner.

There are several great set pieces in this movie. The most notable involves the sinister Burke and a hooker in the Philadelphia train station. This scene foreshadows DePalma's great "Potemkin" tribute in "The Untouchables." Two other stand out set pieces are the climax and the scene in which Jack records the car wreck. DePalma also provides the viewer with memorable bookends to the film. The film's cheesy beginning is hauntingly tied into the final scene. It is powerful stuff.

If at all possible rent the wide screen version of "Blow Out." DePalma composes for the wide screen. The pan and scan formatting to fit your screen rapes his vision. It's kind of watching a scrambled cable TV channel. You might get some idea of what you are watching, but you miss up so much. "Blow Out" is a must for DePalma, Travolta and mystery fans.