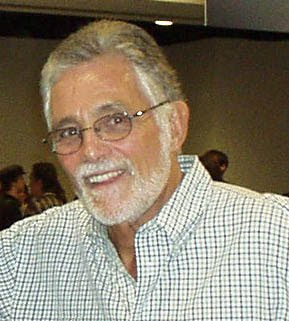 This was my interview with actor David Hedison at the 2003 DragonCon convention in Atlanta, GA.

As a small child in the early 1960s, I looked forward to Sunday evenings. At 7:30PM ABC showed "Voyage to the Bottom of the Sea." The series starred Richard Basehart and David Hedison as the top officers of the nuclear submarine "The Seaview." David Hedison also starred in the original "The Fly" with Vincent Price. Except for the graying hair, Mr. Hedison appeared as fit and trim as he did 35 years ago. Mr. Hedison has appeared in over 100 films and TV shows during his 50-year career, with more movies on the way.

Rusty White: You worked on a number of projects with producer Irwin Allen including "The Lost World" and "Voyage to the Bottom of the Sea." How was he to work for?

David Hedison: He was, I tell you, he was fantastic because he had such great enthusiasm. And he was a great salesman. He would go in with a project, would go into the networks and sell the idea because he got so involved with it and loved it so much. He exuded all that enthusiasm to the ABC brass and they just bought everything he said. He really was incredible. He loved his work. He loved actors. He and I had a lot of differences. I didn't agree with a lot of things he wanted to do, but the show was quite successful so who am I to say.

RW: I imagine you are referring to the addition of monsters to "Voyage to the Bottom of the Sea."

DH: Those I thought were difficult, unrealistic. Richard Basehart and I wanted very much to make a more realistic kind of show and work a little more on our characters. Which never happened. If Richard was sick one day, they would just give me his lines. They were all interchangeable. It was just one of those unfortunate things because there was never anything totally specific about either one of our characters. We were just very solid, grim personalities, and that's the way it was. But we had great fun and I loved working with Richard. He was fabulous.

RW: He struck me as someone who could be very intense. I loved his breakthrough film "The Fourteen Hours" where he played the man threatening to jump off a hotel ledge. It appeared he had a deep intensity that may have come from his true self.

DH: Yes. That's the way he is. As a personality he was more of an introvert, while I am more of an extrovert. He's very sort of into himself. But he and I got along great and became very good friends. Our families are friends.

RW: In "License to Kill" you made the best Felix Leiter, and I thought Timothy Dalton was a great Bond. You believed he could be a cold killer when he needed to.

DH: He was very good. A fine actor.

RW: I'd have liked if you had played Felix in other Bond films, but they went and fed you to that shark.

RW: What do you have coming up?

DH: I did a film in New York, a low budget film called "Death by Committee." That should be out next year. And I did one in LA called "Spectres," and it was an interesting film. It should be our next year also. So I have two films coming out in 2004.

DH: It's a ghost story. The other one is sort of a comedy/drama. "Death by Committee." It's all about reality shows and how one contestant tries to get even with the host. It's a very funny kind of film.

RW: Who directed that?

DH: Michael Bergman did the first one and Phil Leirness, he did "Spectres" and he wrote it as well.

RW: I appreciate your time.

DH: My pleasure. Thank you.