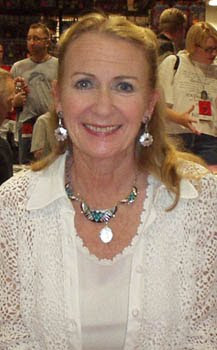 This was my interview with actress Juliette Mills at the 2003 DragonCon convention in Atlanta, GA.

Rusty White: More than anyone else in this room, you probably have the best pedigree. Was there a lot of sibling rivalry between you and your sister?

Juliet Mills: I wouldn’t say so really. Because I am four years older than my sister, and I started in the theater. That’s where I began my career. When she started I was already doing very well in the London Theater. In fact had already been to New York and had been nominated for a Tony. And that was my life. So when Hayley broke into films at a very early age I was only too delighted. We never sort of went up for the same parts or anything like that. And so there never really as been…there’s been sort of a mutual admiration society. We both love and admire each other’s work. Actually, I suppose it was seven or eight years ago we worked together for the first time.

RW: What was that?

JM: We did a tour in England and Australia of a Noel Coward play called "Fallen Angels." We did 700 performances, and we had a great. Great time on that.

JM: Yes, he’s remarkable. He’s 95 now and he’s still going strong. He has all his faculties. He still regales you with stories ad jokes. He’s wonderful.

RW: He has done so much great work. He deserved his Oscar for "Ryan’s Daughter."

RW: Have you done many of these conventions?

JM: No. This is only the second one. This is certainly the biggest one. I did the Hollywood Collector’s Convention, but this is quite a different experience. There is quite a parade of people. You certainly are not bored; I’ll say that!

RW: Any memories of working with him. You’re classically trained. I believe he was a method actor.

JM: Yes he was, but he was also theater trained. And of course, he was just a brilliant actor. Very adept in any medium. He was just like he seemed to be. You know what I mean. On stage and off he was the same. He was a great actor and a great friend. He was always very sweet to me. Working with him and Billy Wilder, who directed the film. Billy Wilder was the funniest man I ever me. I never stopped laughing on that film. Just one laugh after another. Certainly the highlight of my film career.

RW: How did your role on "Passions" come about?

JM: That came about through my agent. I went and met with the producers. They weren’t sure that I could be bad enough, to play a witch. Because she’s bad, as well as funny. And so I did an audition for them, a screen test and I got the job. I love it. I’m having a great time. It is fun to play the bad guy! (Pointing to a still photo from "The Nanny and the Professor") She was very, very good, and she ("Passions") is very, very bad.

RW: I remember "The Nanny and the Professor" when growing up. Who was your co-star, his name escapes me?

JM: That was Richard Long.

JM: He died right after we finished. He was 47. He was very, very good. He was a good actor. He was rather like Gig Young. He was a great light comedian.

RW: It was a shame about that young man also.

JM: Oh tragic. It was strange because he actually died in the show. We taped it; of course he was going to come back to life. It was going to be the Christmas miracle. And he actually died on the same day that his character’s death was televised. We taped that three weeks earlier. It was a very strange thing. But I felt that Josh would have liked it that way because he was a showbiz kid and he loved it. Now, it’s like he’s legendary because not many people have done that, I don’t think. I comforted myself with that. He didn’t have a very long life expectancy. He was only 23. He had heart problems.

JM: He did! He made all his dreams come true.

RW: And you have made one of my dreams come true by giving me this time. Thank you very much.