This is an interview with Oscar-winning actress Kim Hunter conducted at the Memphis Film Festival in 2001. Ms. Hunter passed away one year later on September 11, 2002.

Without a doubt, the biggest coup for the 30th annual Memphis Film Festival was bringing in Academy Award winning actress Kim Hunter. The "Planet of the Apes" theme for this year's festival would not have been complete without Zira. The diminutive actress was the belle of this southern ball as fans formed the longest lines around her when she sat for autograph sessions. This fact also made it difficult to spend any quality time with Ms. Hunter. I was able to get a few questions in here and there. It wasn't that she wasn't approachable, it was just that so many others were approaching her at the same time. The following interview is a compilation of questions I was able to ask her and those she answered from the crowd of fans during the panel discussion. (Only those questions marked RW were asked by me.)

I was struck by Ms. Hunter's size. She is a very petite woman. Her reputation, talent and body of work made me believe she would be much bigger. One look in her eyes gives you some insight into the depth of her character. She is a witty and intelligent person. Ms. Hunter delighted the fans on the last day of the festival when she acted in the lead female role during the recreation of an episode of the "Gunsmoke" radio show. She played on of Miss Kitty's bargirls who ends up teasing the wrong man, setting off a feud between her rivals played by William Windom and Sam Edwards.

RW: When I was a kid, I told my grandmother that she looked like your character in "Planet of the Apes." I meant it as a compliment in that she had Zira's inner beauty along with a slight resemblance to Zira herself. She didn't like that.

RW: Have you seen the new "Planet of the Apes"?

KH:I can't be objective about it. I don't know what I think. I don't think I'm ready to comment on the new one yet. Sorry.

RW: You starred in some great made for television movies during the early to mid 70s. Do you have any memories about working on "Bad Ronald" with Scott Jacoby?

KH:After "Bad Ronald" I've always had a house plant named 'Bad Ronald.' But I have no other memories concerning that film. I remember that Scott Jacoby was a nice young man.

RW: What about the landmark film "Born Innocent" with Linda Blair as the girl sent to reform school? You played her other.

KH:I made so many damn TV movies back them that they all run together. I really couldn't tell you anything about any of them!

RW: On a more recent note, you worked with Italian horror master Dario Argento in "The Black Cat." After working with a director like Val Lewton who left so much to the imagination, how was it to work with a master of gore?

KH:I liked the way the film turned out, and I had a good time working on it. The only problem was that I couldn't communicate with Dario. He speaks Italian and I don't. We had a translator the whole time. I just felt that something was lost with the go between. He was a delightful man, but I wish we could have spoken the same language.

Audience Question: Your first film, "The Seventh Victim" was with Val Lewton (The Cat People). What was he like?

KH:He was a real gentleman. He was the king of horror movies at that time. He left the violence to the audience's imagination. You ended up scaring yourself worse than if he had been graphic.

Audience Question: There was an uproar when Elia Kazan was given the lifetime achievement Oscar. Any thoughts on the controversy?

KH:Kazan deserved the Oscar. It was for his work not his politics. It was a lifetime achievement award, and I believe his work was worthy of that. The Blacklist is another matter. Yes, he named names but he didn't name any names that weren't named already. It was an unpleasant time in this country. 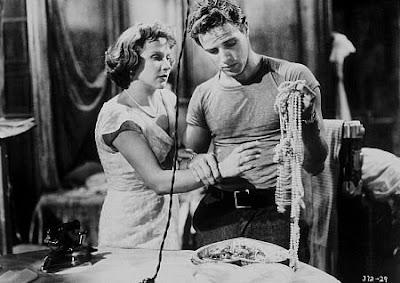 Ray Neilsen, one of the organizers of the Memphis Film Festival and moderator of the panel discussion asked Ms. Hunter about working with Brando.

KH:He's the best actor I've ever worked with. He hated acting though. He acted from his heart. He drew on his experiences to achieve his performance. He has a lot of pain and I imagine that is why he hates acting. He hates to dig up all the pain in his life.

Ms. Hunter was then asked several questions about her experiences on the "Planet of the Apes" films. The following is a compilation of anecdotes based on those questions.

On finding out about the extensive make-up required:

KH:My agent sent me the script and I loved it. I wondered how they would turn me into a chimp. My agent said it would probably not entail to much time. Just some hair and make-up. I found out that it was not so simple. The make-up took about five hours to put on and several hours to take off. They didn't use the same face pieces over.

On learning how to talk in the make-up.

KH:Roddy and I found that our voices came out very nasally. We were wearing these large pieces of rubber over our mouths. We had to try different things until we learned to project our voices forward. We then took the other actors aside and had to teach them how to talk through the make-up.

On smoking with the make-up on.

KH:Both Roddy and I were smokers. The producer, Arthur Jacobs had long stemmed cigarette holders made for every one so we could smoke with the make-up on.

On surviving the make-up.

KH:I got so anxious sitting in the make-up chair for hours with my face covered. I had my doctor write a prescription for valium. I couldn't have done it without the pill. I was fine once the make-up was on. I decided not to take the valium one day. By the end of the session, my make-up man told me not to forget my pill tomorrow!

On acting without the make-up. 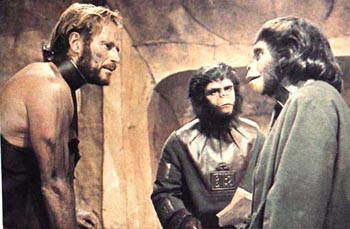 KH:On "Escape From the Planet of the Apes" Roddy and I had a scene in which we were before a committee of congress. They filmed our scenes and then we went to remove our make-up. We were walking through the set and the crew was still filming some reaction shots of the actors playing the committee members. Roddy and I offered to take our seats in front of them so they could act off of us, even though we weren't in the shot. It was a courtesy to the other actors. I felt so out of place, because I was not Zira. It didn't matter that I wasn't in the make-up. The make-up became so much a part of Zira that I wouldn't do any more scenes without the make-up.

One audience member asked Ms. Hunter what her favorite ice cream was and if she preferred cones or cups.

Ms. Hunter created one of the most memorable screen characters ever in "Planet of the Apes." Zira was an open minded, caring and warm ape. I imagine that it was just Ms. Hunter playing herself.